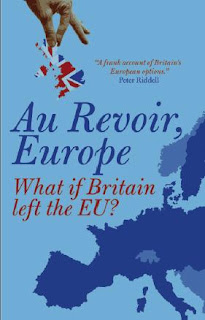 What would you say is the biggest serious new story this week? Well, of course it must be David Cameron’s announcement that if the Conservatives win the next election, then there will be a referendum on ’s place in . This subject has never been a hotter topic than it is now – and Biteback have the perfect book for anyone who wants to be better informed about the whole subject. Au Revoir ? by David Charter is a major polemic on ’s complicated relationship with the EU as the 40th anniversary of our membership approaches. This book provides clear and reliable information on both sides of the debate. It shows how much the EU really costs, charts Britain’s declining influence and reveals the plans for ‘more Europe’ being discussed in Brussels. It cuts through the hysteria on both sides of the argument to analyse the alternatives available for business, consumers and diplomats. The central issue of trade, cited by David Cameron as a key reason for continued EU membership, is tackled head-on. The book also explores what leaving the European club would mean for jobs, travel, security and the British way of life “I wanted to believe in ,” David Charter said. “But when you are constantly told there is no alternative, the questions start. This book provides the answers.” David Charter has spent five years living and working in for The Times and this work is the result of his own journey to the heart of the European project. Au Revoir ? was published in November in trade paperback at £14.99 and you can order it here. 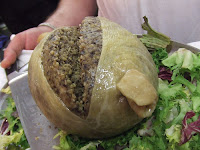 Happy Burns Night! In a general spirit of celebration of all things Scottish, today is the perfect time to remind you about the three Bob Servant titles: Delete This At Your Peril; Bob Servant: Hero of Dundee and Why Me? The Very Important Emails of Bob Servant by Neil Forsyth. These books have a very strong track record anyway – the first one has sold over 30,000 copies – but the important thing to know is that they form the basis of a brand new BBC comedy series, which started broadcasting this week on BBC4 and BBC2 . It’s a comedy of embarrassment and ego, similar to The Office; and the BBC is trailing the show on all channels now – you can watch a little clip from it here. Publicity for the show is looking very significant; Brian Cox (the actor playing Bob Servant, not the astronomer!) is being interviewed by Lorraine Kelly, The One Show, Radio 4 and others. The author, Neil Forsyth, is writing a couple of tie in pieces for The Times and the Guardian where he mentions the books – and all the books are stickered to draw attention to the TV series. 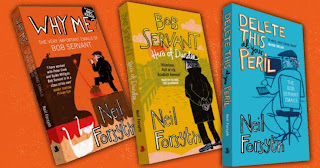 Exciting news – the Guardian are to run a big feature and an interview with Karen Gravano, the author of Mob Daughter next week. This is a revealing memoir by the daughter of the Mafia’s most notorious turncoat. She stars in the hit reality TV show Mob Wives, and has been featured in several Daily Mail articles already. Karen Gravano was born in and is the daughter of Sammy ‘the Bull’ Gravano, one of the Mafia’s most feared hit men. With nineteen confessed murders, the former Gambino Family underboss was John Gotti’s right-hand man, and the highest-ranking gangster ever to testify against members of his high profile crime family. To Karen, though, Sammy Gravano was a sometimes elusive but always loving father figure. But by the age of twelve, Karen knew he was a gangster, and as she grew up, while her peers worried about clothes and schoolwork, she was coming face-to-face with crime and murder. She was nineteen when her father turned his back on the Mafia and cooperated with the Feds, which left her family broken and living in fear of retaliation – this is the compelling true account of her life as a Mob daughter. Pretty sensational stuff – and perfect for the media – you will not be surprised to hear that as well as the big piece in the Guardian, there is going to be plenty of publicity in women’s magazines including Bella and Readers Digest next week. Mob Daughter is published on 4 February and this is certain to be a book that your customers will be looking for! True crime stories always sell well – and this is one of the biggest! You can order copies of Mob Daughter here and watch an interview with Karen talking about the book on YouTube below. 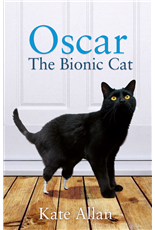 What’s that old bookselling adage about how you can’t go wrong with books about crime, Marilyn or cats? Well, this week we can certainly give you two out of three – Oscar the Bionic Cat by Kate Allan is published in March, and we’ve just heard that the Mail on Sunday are going to run extracts from it, starting in February. When Kate’s beloved black cat, Oscar, was found lying severely injured in a field near their home, she was sure the accident-prone boy had met his end. With both hind legs severed by a combine-harvester, Oscar’s life hung in the balance. But luckily for him, his vet knew Noel Fitzpatrick, star of BBC One’s The Bionic Vet. Noel agreed to try pioneering surgery on Oscar, replacing his legs with specially created prosthetics. Against all odds, Oscar came back from the brink to become the world’s very first bionic cat, and a feline celebrity. This amazing true story of feline survival and human ingenuity will appeal to many readers – not least all of those who watch The Bionic Vet, and the many other “aaahhh bless” animal programmes on the box! Order Oscar the Bionic Cat here If this is your sort of thing and you want to have a look at Oscar, you can see him on YouTube below. 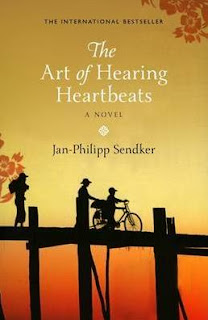 (now ) is a country much in the news at present.  Nobel Peace Prize-winner Aung San Suu Kyi was recently released from a house arrest that was inflicted by the military junta in 1989, and was on Radio 4 this week choosing her Desert Island Discs. Very few contemporary novels have been set in , but The Art of Hearing Heartbeats (great title – and a gorgeous cover) by Jan-Philipp Sendker changes that. This is a poignant and inspirational love story that will be published in B format paperback in March. When a  successful New York lawyer suddenly disappears without a trace, neither his wife nor his daughter Julia has any idea where he might be…until they find a  love letter he wrote many years ago, to a Burmese woman they have never heard of. Intent on solving the mystery and coming to terms with her father’s past, Julia decides to travel to the village where the woman lived. There she uncovers a tale of unimaginable hardship, resilience, and passion that will change her life once more. For readers who enjoyed The Snow Child and The Glass Palace this is an intoxicating and lush love story, set in present-day and 1950s . The book is already a bestseller in several European countries and the , selling over 400,000 copies in alone, and there is a movie in pre-production. The vivid and evocative prose has won praise from critics and readers all over the world and this novel is perfect for reading groups, with many points for discussion such as Romantic love versus Family Love, Colonialism, East versus West and Superstition versus Faith.
Find out more and order The Art of Hearing Heartbeats here

As I say, I really love the evocative cover of The Art of Hearing Heartbeats – but what makes a truly great cover is a very personal and much debated topic! Is it all about which jacket will sell the most books – or can a book be great artistically, but not very appealing to the general book buyer? Have a look here to see what a selection of authors and critics felt were the best book cover designs of 2012.

And finally – yes we know it’s cold, yes we know it’s great to have fun in the ice and snow – but please don’t try anything as daft as this German hard man. OK – well then perhaps you should if it’s going to give the rest of us something this hilarious to watch!

That’s all for now folks, more next week!
Posted by Compass Rose at Friday, January 25, 2013