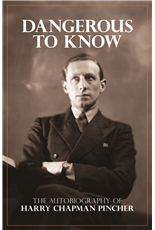 Let’s start today with the news of two major serialisations of books coming up from Biteback. First up is extracts from Dangerous to Know: The Autobiography of Harry Chapman Pincher (£20, hb, 978 1849546515) which will be published in the Daily Mail this Saturday. Harry Chapman Pincher is a legend amongst journalists, one of the most famous newspaper men of his day and his era’s foremost investigator of the vicissitudes of the state. He is the author of many bestselling books including Their Trade is Treachery. Now 99 years old, he is going stronger than ever. His name, a byword for investigative journalism, sounded a note of real terror for those trying to safeguard the secrets of state. His first splash, a leaked top secret account of the development of the atomic bomb, sparked a furious trans-Atlantic row. It was only the start of a career in which the name Chapman Pincher became synonymous with high-level leaks from the most secret parts of government. The question of government secrecy and whether or not journalists are acting in the public interest by revealing those secrets is still hugely relevant today, and there is no one more qualified to comment than Chapman Pincher. Colourful, indiscreet and compelling, this life of a true journalistic colossus also reveals the secret history of the century he bestrode. When he finally retired from journalism, the leaks kept coming, leading to a series of best-selling books on the infiltration of ’s intelligence services by which culminated in the allegation in that the head of MI5 was a Soviet spy.
Order Dangerous to Know here

Hang on a minute, I’m pretty sure the Head of MI5 is in fact Judi Dench – and here she is in one of her best moments quoting Tennyson in this cracking clip from Skyfall. I think Harry Chapman Pincher would agree with every word. 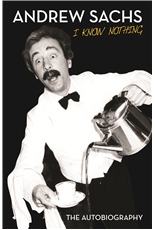 Secondly, another serialisation also begins this weekend in the Mail on Saturday – continuing through to Monday and Tuesday – for I Know Nothing by Andrew Sachs (£18.99, hb, 978 1849546362) which has just been published by Robson Press. Charming, laugh-out-loud funny and utterly compelling, this is the rich life story of one of ’s best-loved character actors. Andrew Sachs is of course best known for his role as Manuel in the British sitcom Fawlty Towers, and these days is something of a national treasure. This autobiography begins a few weeks before Kristallnacht in November 1938, when a young Andrew Sachs looks on as Nazi officers arrest his father while the family are eating in a restaurant. The son of a Jewish father, a few days later Sachs watched as the Nazis burned and looted Jewish shops on the streets of . I Know Nothing recounts anecdotes of a bizarre adolescence, the author’s often hilarious struggle to come to terms with all things English, including the food, the schools and the perils of the language (rude words especially!), his early days in rep, and later working with a galaxy of stars including Rex Harrison, Norman Wisdom, Noel Coward, Alec Guinness, Richard Burton, Peter Sellers and Dame Edith Evans. It tells of how he eventually came to team up with John Cleese on the show that would make him famous as the hapless waiter from , and tells the true story of how the classic series was made and the personalities involved in its creation. This three day Daily Mail serialisation is terrific publicity for this book, and I Know Nothing is essential reading for the many many fans of the classic TV series – and of Andrew himself.
Order I Know Nothing here

And of course we must just have a little look at Andrew in action, repeating this famous phrase – to the ever increasing frustration of Basil! 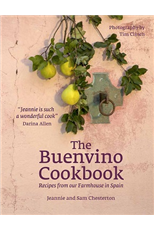 And while we’re on the subject of charming and much loved things coming here from Espagne: The Buenvino Cookbook: Recipes from our Farmhouse in Spain by Jeannie and Sam Chesterton will remind us all why we Brits never stop appreciating the Mediterranean cuisine and way of life.  For over thirty years, Jeannie and Sam Chesterton have lived high in the hills of ’s western at Finca Buenvino, their welcoming pink farmhouse, which they have run as a guesthouse —achieving international acclaim for their cooking and also their cookery courses. Thomasina Miers (winner of BBC’s MasterChef 2005, writer and television presenter) said “Spending time at Buenvino with Sam and Jeannie is like a suspension of normal life. Time stands still whilst you eat amongst quince trees and sounds of the forest. Jeannie’s delicious, restaurant-standard food abounds and wine flows freely; they live a life of comforting generosity, and a general feeling of joie de vivre pervades the surrounding hills. I can’t wait to buy this book and be transported back to their little corner of paradise.” The Buenvino Cookbook (£20.00, hb, 978-1-909657-29-8) is a beautiful book with mouth-watering colour photographs by Tim Clinch, and it is published by Bene Factum in April.
Order the Buenvino cookbook here 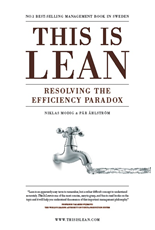 Now, what is Lean? Is it what we hoped to become when we started the 5:2 diet – or signed up for a gym membership? Is it what Manuel does in order to avoid being hit by a spoon wielded by Basil? Nope – wrong and wrong again. Lean is the most widespread management philosophy of our time and is currently present in every industry, yet the concept is still vaguely defined and widely misunderstood. This Is Lean: Resolving the Efficiency Paradox by Niklas Modig and Pär Åhlström was launched in in October 2011 and is currently the best-selling management book there, with over 37,000 copies sold in one year. By using clear, concise language and insightful examples, the book has brought greater clarification to the essence of Lean and revolutionized top-executives and employees understanding of what Lean actually is. This Is Lean is published in the by Rheologica Publishing (£12.99, pb, 9789198039306) and is relevant to any kind of business. It is currently being used by a number of multi-national companies including Ericsson, Scania and Volvo and is also widely used by the Swedish public sector, including the Swedish Police Service and all larger hospitals. The book is also held in high regard by world-renowned academics: Professor Terry Hill Emeritus Fellow of Oxford University said “I found This Is Lean most enjoyable – punchy opening, use of some examples/illustrations throughout, good writing style and, most importantly, a sound exposé of the concepts”  while Professor Nigel Slack Emeritus Professor from the Warwick Business School commented“This Is Lean is just fantastic. Really readable, interesting, relevant, and wise. I love the stories – they bring it to life.” This book addresses the eternal question of why we all think we are efficient being busy busy busy; when we in fact we are extremely inefficient most of the time – and I think most of us can certainly relate to that! This Is Lean has been a bit of a sleeper hit so far in the UK and there are certainly more sales to be had from it – so don’t miss out – order it for the business and management section of your bookshop today – and find out how “creating more value by working less” can be a realistic and logical way to run a business.
Order This Is Lean here 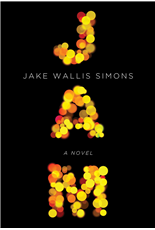 Who remembers that Doctor Who episode entitled Gridlock, set some time in the future when the whole of is stuck in a never-ending traffic jam, and everyone lives in their cars for years and years? Well, I was reminded of it recently, while looking at a fantastic new novel entitled Jam by Jake Wallis Simons. Jake is a journalist on the Telegraph and also a presenter for BBC Radio 4. His previous novel The English German Girl was selected as Waterstones’  “Next Big Thing” and has sold 15,000 copies in the . Jam is a brilliant, tense new state-of-the-nation novel that opens on one night on the M25 in a seemingly endless traffic jam. As darkness falls, the traffic jam lengthens, and motorists turn off their engines. Then they get out of their cars. And so the story begins. People from all walks of life are thrown together. There are Max and Ursula, a bickering married couple with a friend’s child in the back seat; hungover Shauna, on her way back from a wedding; dope-smoking students Dave, Stevie and Natalie; white-van men Chris and Rhys; Shahid, a charismatic aspiring footballer; Harold, a Scottish academic and M25 historian; Hsiao May, an insect expert; and Waitrose Tony, whose delivery van becomes the target of hungry motorists. As the minutes become hours and impatience turns to anger, the tension grows. Secrets are revealed. Friendships are made. Relationships are broken. And lives are changed. This sounds pretty gripping to me and those in the Compass office who have read it say it is terrific. Jam is a £12.99 paperback, published by Polygon in April (978 1846972805) and you can find out more and order it here.

And just to remind you, here’s the bit at the end of that Doctor Who episode where they all finally get out of the traffic jam and break free! 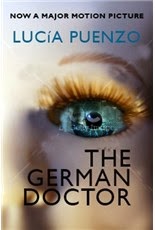 The German Doctor by Lucía Puenzo, translated by David William Foster is a dark and chilling novel, based on the true story of Josef Mengele who escaped to in the 1960s and lived with a family who were unaware of his horrendous past. Josef Mengele was of course the Nazi physician, infamous for his human experimentation at Auschwitz, particularly on children, twins and pregnant women and the book begins in Patagonia in 1960when Mengele has fled from Germany and come to South America to continue his work – seeking to manipulate genes to create the ‘perfect’ human race’. In the small he first meets Lilith, a child who he is instantly fascinated yet repulsed by. For Lilith has a growth defect, and the disproportionate size of her features represent all he is trying to exterminate from humankind. Yet, even more fascinating is the fact that her siblings are perfect examples of the Aryan race; tall, strongly built and fair. The anomaly of Lilith’s existence fascinates him, and when he discovers Lilith’s mother is pregnant with twins, the temptation to involve himself in their lives and even interfere with the pregnancy is too much for him to pass up on. A cold, calculating but eerily charming man, he manipulates his way into the family. And so begins a dark relationship between the doctor and little girl, a kind of love that cannot end well. Sooner or later his terrible past is going to catch up with him. This extraordinary book has been made into an award winning Argentinian film which will release around the world in spring 2014  (it opens in the UK in May) and The German Doctor (B-format paperback, £8.88 978 1843915430) is published by Hesperus Nova in April.  You can watch a trailer for the film here on YouTube
Order The German Doctor and find out more here

On a much lighter note, talking of practicing a cold and calculating deception – here is a very funny clip of some highly gullible Chelsea fans duped into giving their “knowledgeable” opinions on some totally fictitious footballers!

Very best wishes to any booksellers out there affected by the terrible weather – I know it is truly appalling in some parts of the .  We are lucky enough to be in a part of the country relatively unaffected and have been open-mouthed at the massive waves sweeping in over Chesil beach and the sea wall collapsing under the railway at Dawlish.

This blog is read weekly by over 700 booksellers, publishers and publicists. If you would like to order any of the titles mentioned, then please click here to go to the Compass New Titles Website or talk to your Compass Sales representative.
Posted by Compass Rose at Friday, February 07, 2014