Good afternoon! Well, firstly today while you are on the computer, let’s just take a quick test to find out just exactly how annoying you are on Facebook. Oh dear oh dear – clearly you seriously need to curtail your social media usage – and maybe pick up a really good book instead? And what a bit of luck, I have the very thing… 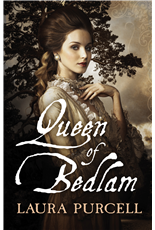 Queen of Bedlam by Laura Purcell is coming from Myrmidon Books in June. (Pb, 978 1910183014, £8.99) It is an emotional tale based on historical fact imagining the lives of mad King George III's wife and daughters – which will definitely appeal to fans of Philippa Gregory, and those keen on the whole “women’s history” genre – which is still red hot. Laura Purcell is an ex-bookseller (hurrah – maybe that means that you too can move into the heady glamorous world of authordom); who lives in Colchester, met her husband working in Waterstones bookshop and recently appeared on the PBS documentary The Secrets of Henry VIII's Palace, talking about Queen Caroline's life at Hampton Court. Laura’s novels (this is her first) explore the lives of royal women during the Georgian era, who have largely been ignored by modern history, and I certainly think it’s true that the Georgian era is about to become trendy and will be “the next big thing” – following on from the enthusiasm for the Tudors and the War of the Roses. Maybe it’s all those cute pics of baby – and the prospect of a new Georgian era dawning! Anyway, enough musing; Queen of Bedlam is a cracking read, which starts in 1788. The calm order of Queen Charlotte's court is shattered by screams; the King of England is going mad. Left alone with thirteen children and with the country at war, has to fight to hold her husband's throne. It is a time of unrest and revolutions but most of all fears the King himself, someone she can no longer love or trust. Her six daughters are desperate to escape their palace asylum.
Their only chance lies in a good marriage, but no prince wants the daughter of a madman. They are forced to take love wherever they can find it, with devastating consequences. This moving true story of George III's madness and the women whose lives it destroyed is Myrmidon’s lead commercial title for 2014, and there will be a national PR campaign to build awareness with a author tour in summer 2014 including talks at royal palaces. Laura writes a history blog which you can read at www.laurapurcell.com if history is your thing! The cover is good, and I feel this paperback has a lot of potential.
Queen of Bedlam is published in June, and you can find out more and order it here. 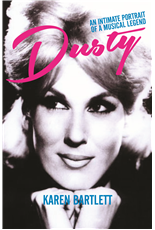 Who likes a bit of Dusty Springfield? Just about everyone I think – especially on a karaoke evening when you can belt out I Only Wanna Be With You at top volume! Dusty: An intimate portrait of a musical legend by Karen Bartlett is the life story of an immensely complicated and talented woman who left a unique musical legacy to the world. It includes never-before-published material and interviews with intimates of the star and newspaper serialisation is highly likely.  This £20 hardback which includes 16 pages of photos, is published by Robson Press in June (978 1849546416). Dusty Springfield was one of the biggest musical stars of the twentieth century. From the launch of her solo career in 1963 she was ’s biggest female star – in almost every way, ahead of her time.  For instance, she was the first British artist to appreciate the impact of Motown, and her love of its music led her to introduce Martha and the Vandellas, The Supremes and Stevie Wonder to audiences through her TV shows. Her musical ear was unsurpassed, and she famously discovered Led Zeppelin. She was deported from apartheid in 1964 for refusing to play to segregated audiences, setting a precedent for a boycott of by entertainers. In her personal life, Dusty broke the mould as the first female entertainer to admit that she was bisexual, a decision that was to overshadow the remainder of her career. This book is the definitive biography of Dusty Springfield, and Karen Bartlett has interviewed childhood friends, lovers and employees, as well as those who worked with her. She reveals new details about Dusty’s childhood, her relationships, and her life long struggle to come to terms with her sexuality. She also charts the depths Dusty sank to in her battle with addiction, and the story of her survival and last days.
Watch her singing Son of a Preacher Man here and then order lots of copies of Dusty here!

It sounds as if Dusty Springfield was incredibly supportive and helpful to the other artists around her. Sadly, the female musicians of today don’t seem to be quite so sisterly! Have a look here for some of the best pop star spats – Christina Aguilera vs. Lady Gaga anyone? 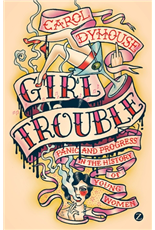 Well, talking of badly behaved female pop star leads me very nicely on to the next title, Girl Trouble by Carol Dyhouse which is published by ZED Books in June (pb, 978 1783601608, £8.99). “Too bold, too sexy, too boyish, too fast, too thin . . . whenever something has gone wrong in society at large, says historian Carol Dyhouse, you can be certain that girls between the ages of ten and 25 have been somehow to blame. ” wrote the Mail on Sunday. Girls behave badly. If they’re not obscenity-shouting, pint-swigging laddettes they’re narcissistic, living dolls floating around in a cloud of self-obsession, far too busy twerking to care. And this is news. In Girl Trouble: Panic and Progress in the History of Young Women,  eminent historian Carol Dyhouse shows that for over a century now, where there’s a horrific headline, a scandal or a wave of moral outrage you can bet a girl’s to blame. Whether it be stories of ‘brazen flappers’ staying out, and up, all night in the 1920s, inappropriate places for Mars bars in the 60s or Courtney Love’s mere existence in the 90s, bad girls have been a mass-media staple for more than a century. And yet, despite the continued obsession with their perceived faults and blatant disobedience, girls are infinitely better off today than they were a century ago. This is a witty and wonderful book, telling the story of the challenges and opportunities faced by young women growing up in the swirl of twentieth century and the pop-hysteria that continues to accompany their progress. You will certainly be hearing more on this subject – the publication of Girl Trouble will be accompanied by an inventive social media and Twitter campaign #Girltrouble.   I can highly recommend this title – great cover – you can order Girl Trouble and find out more here. 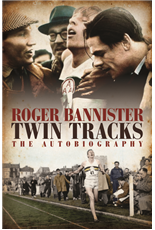 There is absolutely loads of publicity coming up for Twin Tracks – the Roger Bannister Autobiography – the media are falling over themselves for a chance to interview this great sporting hero. This weekend there will be a big feature in the Relative Values section in the Sunday Times magazine and in the coming weeks there will be interviews with the Times, the Daily Mail the Big Issue, the
Sunday Times, the Daily Express and the Oldie Magazine and Sir Roger will also be on Radio 4’s More or Less. This frank and truthful memoir of a great and inspirational athlete has just been published by Robson Press (£20.00, hardback with 8 pages of photographs, 978 1849546867) and you can order Twin Tracks here. 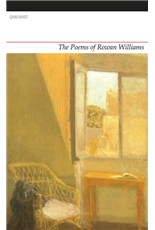 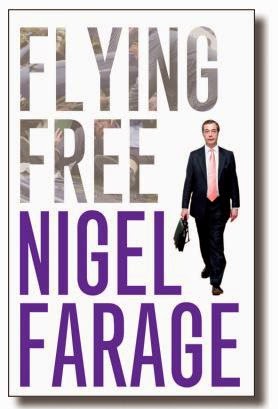 You really couldn’t imagine anyone being more talked about than Nigel Farage is at present, during the run up to the European elections in May. So this is a very good time for Biteback to bring out a new edition of Flying Free: The Autobiography of Nigel Farage (pb, 978 1849540940 £8.99). He is a politician impossible to ignore and under his leadership his party has consistently outperformed its size in European and local elections. With his customary wit and humour, Farage’s uproarious and compelling autobiography describes his many battles with enemies in and on the home front. Most importantly, he reveals how he shepherded a collection of what David Cameron dismissed as “fruitcakes” and “loonies” into becoming a serious political party that has so ably captured public feeling. Flying Free is the candid and colourful life of a fascinating and divisive character, and the story of the birth and evolution of a party that has grown into a political contender.
Order Flying Free here 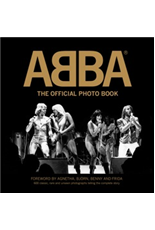 Lots and lots of publicity everywhere for Abba: The Official Photo Book published by Max Strom Publishing (Hb, 978 9171262820 £35.00). This is the biggest and best book on Agnetha Fältskog, Björn Ulvaeus, Benny Andersson and Anni-Frid Lyngstad with more than 600 classic, rare and unseen photographs telling the complete story; and it’s selling well! Don’t forget to keep it on display as there will be more publicity as we approach the Eurovision Song Contest in May; since of course 2014 is the 40th anniversary of the band’s international break through when they won it in ! Will carry off the prize again this year do you think? Or do you feel the has a chance with our entry Children of the Universe - which you can watch here.
Order Abba the official photo book here.

The real question to ask ourselves though I feel is: Were Abba the worst dressed band of all time? Have look here to remind yourselves of the competition! Bay City Rollers anyone?! 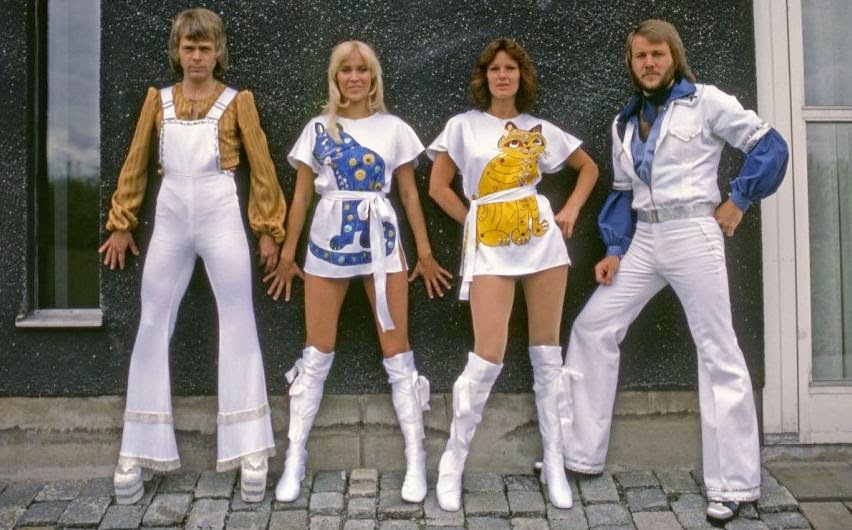 This blog is read weekly by over 700 booksellers as well as publishers and publicists. If you would like to order any of the titles mentioned, then please click here to go to the Compass New Titles Website or talk to your Compass Sales representative.
Posted by Compass Rose at Friday, April 25, 2014