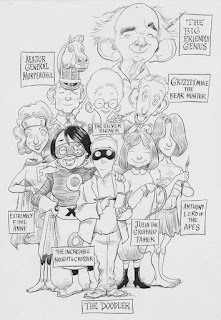 Excellent news that the superb Chris Riddell is to be the new Children’s Laureate. I love his drawing of all the previous Laureates as superheroes! He’s on a mission to get everyone doodling and drawing as well as reading and writing. 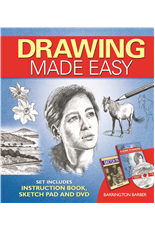 Some of us may need a little help with that - so a good time for Arcturus to publish Drawing Made Easy by expert Barrington Barber - one of the most successful creators of practical drawing books currently available. His book Fundamentals of Drawing has sold over one million copies worldwide. Drawing Made Easy is a set that includes a full colour 80-page book with step-by-step instruction in techniques and how to tackle a broad range of subject matter. There is also a tear-off sketchpad, to practise the exercises covered in the book and improve skills and a DVD featuring Barrington Barber demonstrating essential drawing techniques and imparting his inspirational artistic philosophy. Drawing Made Easy (978 1784046378, £14.99, pb and DVD) is published in September.
Your can order Drawing Made Easy here

And here’s a brilliant YouTube video of Chris Riddell drawing one of his amazing characters - The Nameless One. Somehow I think even careful perusal of Drawing Made Easy isn’t going to turn me into such a talented artist as Chris. 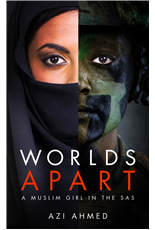 There is a lot of publicity coming up for World’s Apart: A Muslim Girl in the SAS by Azi Ahmed (hb, £16.99, 978 1849547796) which is published next week by Biteback. The Daily Mail is just about to begin a serialisation of it and there will be an interview with Azi Ahmed in the Times, next week and also a big piece in the Manchester Evening News. The author will be on BBC Breakfast on 15 June and there will be interviews on all the BBC local radio station next week. You will remember this is the remarkable book about a clash between very different worlds: the British Army and ’s Muslim community. It follows Azi Ahmed’s extraordinary journey from working in the family kebab shop in to a barracks where the Colonel of 21 SAS unit is putting women through selection training with the men. Deep-rooted ethnic and gender prejudices need overcoming and she is faced with trying to defend her religion and culture within a regimented and hostile environment, a situation that is not helped by the events of 9/11. At home, Azi hears her community’s anger over the British intervention in the . Back at the barracks she supports her soldier comrades preparing for the War on Terror.
Find out more and order Worlds Apart here

Today is National Kindness Day: one day every year that asks people to perform a random act of kindness – whether that’s to friends, family, school mates or strangers! But who are the kindest literary characters? Have a look here to see if you agree with this Guardian list of the top ten tenderest and sweetest people in literature! 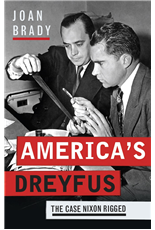 America’s Dreyfus: The Case Nixon Rigged by Joan Brady is an extraordinary re-investigation of one of ’s most notorious spy trials overturns a verdict that has stood for 60 years and reveals the part it played in Richard Nixon’s rise to prominence. The author of this book, Joan Brady met Alger Hiss, when she was a young dancer of 18, and he had been recently released from jail after a perjury trial which had made headlines for months in the . Over the following 35 years of friendship she had no basis for questioning the verdict, but her growing knowledge of Hiss himself, and the puzzles raised by his own reactions to his trial and imprisonment led her, after Hiss’s death, to delve back into the transcripts of the hearings and into FBI files about the case. The story Brady tells in this book overturns the received view that Hiss was a spy and a former communist who lied in court. But more surprising still is her analysis of how Richard Nixon’s rise to fame, culminating in the US presidency, was based on the Hiss case, which Nixon instigated and conducted to create anti-communist hysteria and aid him in his election campaigns. Through false accusations, a flaky key witness, rigged paperwork and forged evidence, Nixon and other anticommunist politicians rigged a verdict which destroyed the life of Hiss, and ushered in an era of anticommunist hysteria which included the notorious hearings organised by Senator Joseph McCarthy. Joan Brady was the first woman to win the Whitbread Book of the Year Award, now the Costa, for her novel, Theory of War. She went on to write several more highly successful novels and thrillers and her talent as a prizewinning thriller writer produces a fast-paced story full of twists and turns, with the additional ingredient of her own personal part in the unfolding narrative. She shows how the Hiss case makes it all too clear that the purpose of political bogeymen – Communism then, terrorism now – is not to protect populations but to curb civil liberties and give secret services leave to override constitutions and courts. America’s Dreyfus: The Case Nixon Rigged  by Joan Brady (£20.00, hb, 978 0993153327) is certain to attract much media attention when it is published by Skyscraper in September and you can find out more and order it here. 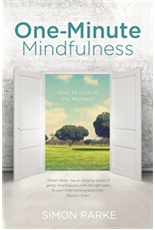 The Oxford Dictionary announced that the 2014 word of the year was Vape (the 2013 word was Selfie, and the 2012 word was Omnishambles if you’re interested!). But a strong contender must have been the word Mindful – something that many of us struggle daily to be. We often spend so much time looking forward, rushing on to the next thing, or looking backwards, stressing and worrying about our perceived mistakes, that we rarely still ourselves and our minds enough to be truly in the present moment.  One Minute Mindfulness: How to Live in the Moment by Daily Mail columnist Simon Parke has just been published by Hay House. In it, Simon Parke uses stories and simple thoughts to help us see through clear eyes how we can return to the present moment and remain there. Both inspiring and practical, this book is for anyone who wants to come home to themselves. This is a new edition of this title, which features 15 more essays from Simon, as well as an appealing new package that fits closely with the mindfulness trend. The book and author will feature in a future issue of The Best You magazine and the June issue of Om Yoga. The book will also feature in the June issue of Psychic News , Woman and Home, Soul & Spirit as well as Kindred Spirit, soulandspiritmagazine.com, and healthista.com. You can find out more and order One Minute Mindfulness: How to Live in the Moment by Simon Parke (pb, 978 1781804964, £8.99) here. 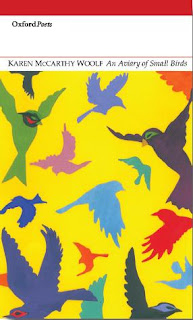 We are delighted to announce that the Carcanet poet Karen McCarthy Woolf has been shortlisted for the award for Best First Collection in the prestigious Forward Prize for her book An Aviary of Small Birds (978 1906188146, £9.95, pb). The winners will be decided on 28 September. An Aviary of Small Birds is both Karen McCarthy Woolf’s elegy to a stillborn son and testament to the redemptive qualities of poetry as a transformative art. Ultimately, it is a closely felt connection with nature that allows the author to transcend the experience and honour the spirit of her son.  Michael Symmons Roberts said it was “an entrancing and heartbreaking debut. At times she takes your breath away.” The cover is beautiful. 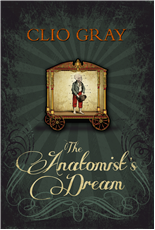 Myrmidon’s lead literary fiction title for 2015 is The Anatomist’s Dream by Clio Gray. This dreamscape novel is a fantastical journey through an imagined 1840s Germany beset both by revolutionary ferment and repression as seen through the eyes of a small boy, Philbert, who has been borne with a ‘taupe’, a disfiguring inflammation of the skull. Abandoned by his parents, Philbert finds refuge and companionship with an assortment of eccentrics in an itinerant band of artists, magicians and entertainers as they journey in a travelling carnival across an increasingly threatening landscape. Myrmidon’s publishing director, Ed Handyside, says that he was drawn to the scale and colour of the novel as well as to its fable-like qualities. “It’s an apt title, to be sure,” he said. “There is a dream-like quality to Philbert’s world that lingers long after reading.” This is something to be savoured by fans of Mervyn Peake’s Gormenghast trilogy, Erin Morgenstern’s The Night Circus or Patrick Süskind’s Perfume. The author, Clio Gray was born and grew up North Yorkshire but has lived in Easter Ross in for the past twenty years, where she works as a librarian. Best known for the ‘Stroop’ series of Napoleonic crime novels published by Headline, she is also a consummate writer of short stories and won the Orange Short Story Award in 2004. The Anatomist’s Dream (978 1910183205, hb, £18.99) is published  in July and you can order it and find out more here

The Miner is the most daringly experimental and least well-known novel of the great Meiji writer Natsume Sōseki. An absurdist tale about the indeterminate nature of human personality, written in 1908, it was in many ways a precursor to the work of Joyce and Beckett. Translated by Jay Rubin, and with an introduction from Haruki Murakami, this is bound to appeal to fans of Japanese literature. The narrative unfolds within the mind of an unnamed protagonist-narrator, a young man caught in a love triangle who flees , is picked up by a procurer of cheap labour for a copper mine, then travels toward and inside the depths of the mine, in search of oblivion. As he delves, the young man reflects at length on nearly every thought and perception he experiences along the way. His conclusion? That there is no such thing as human character. The result is a novel that is both absurd and comical, and a true modernist classic. There has been huge interest in this title from the literary press there are several offers to serialise the introduction. Its translator Jay Rubin will be over in the to promote the book and is available for events. The Miner by Natsume Sōseki (pb, 978 1910709023, £9.99) is published by Aardvark Bureau in September and you can find out more and order it here

Well, it’s a challenge, but to finish, can we come up with a top five songs about miners? Yes, I think we can! Firstly, let’s start fairly traditional with The Coal Miners Song by Jimmy Joe Lee, then it probably has to be Big Bad John by Jimmy Dean. And how about this classic; Sixteen Tons from Tenessee Ernie Ford in 1955. A little bit more “out there” is probably Together We Work the Black Seam by Sting – but I think number one, and certainly my top of the pops are these lovable little chaps from Snow White!

This newsletter is sent weekly to over 700 booksellers as well as publishers and publicists. If you would like to order any of the titles mentioned, then please click here to go to the Compass New Titles Website or talk to your Compass Sales representative.
Posted by Compass Rose at Friday, June 12, 2015