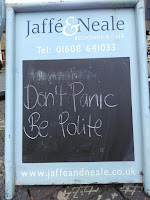 Today’s Compass Points is an EU referendum-free zone, but personally, I think the Jaffé & Neale bookshop in Chipping Norton has got the right idea. 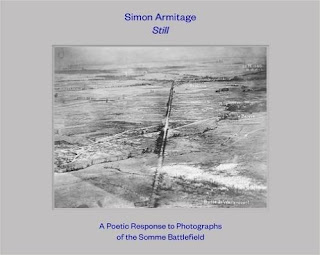 Simon Armitage will be reading poems from his beautiful hardback Still: A Poetic Response to Photographs of the Somme Battlefield (£25.00, hb, 978-1911253136) this Sunday at 4:30pm on BBC Radio 4. This sequence of poems is in response to 26 panoramic photographs of Somme battlefields chosen from archives at the Imperial War Museum. The Somme Offensive took place on the Western Front between July and November 1916, and is considered to be one of the bloodiest in British military history. Simon Armitage has written thirty poems of between two and 20 lines that are paired with black-and-white images that are a hundred years old.  The contemporary words meld with the visual devastations of war to haunting effect.  Map-like images of cratered fields and hieroglyphic trench patterns; landscapes of sepia-toned towns and ghostly villages; panoramas of apparently tranquil meadows and country lanes that disguise more macabre details form an atmospheric backdrop to these moving poems. Still is a 74-page large scale landscape publication with introductory texts, contemporary maps, fold-outs and decorated endpapers. The book accompanies an exhibition of the same name that opened at East Gallery in Norwich on 10 May, which is the first venue in a national tour. Still is published by Enitharmon in July – and you can listen to that Radio Four reading via a link to the programme, which is entitled The Echo Chamber here – I would very much recommend it. 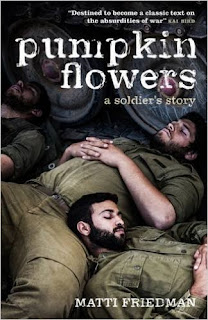 Pumpkinflowers: A Soldier’s Story by Matti Friedman (hb, £12.99, 978 1785900433) published by Biteback, received a tremendous review in Prospect, this week, with Ben Judah proclaiming that it “will be remembered as a classic.” Part memoir, part reportage and part haunting elegy for lost youth, award-winning writer Matti Friedman's powerful account follows the author and a band of young soldiers in an unnamed war in in Lebanon in the late 1990s.Pumpkinflowers is a lyrical yet devastating insight into the day-to-day realities of war, and a powerful coming-of-age narrative. Raw and beautifully rendered, this essential chronicle casts an unflinching look at the nature of modern warfare, in which there is never a clear victor and innocence is not all that is lost. Prospect magazine said “Pumpkinflowers is a sad, lyrical book – proud and fierce on its own terms. Friedman’s prose is elegant and concise, yet it is studded with gems from the Talmud and Torah that only a writer deeply learned in the Jewish tradition could offer. His memoirs of his time in the mist and the mountains of Lebanon are full of haunting insights into what it means to be a soldier. It will be remembered as a classic.” You can read the full review here. 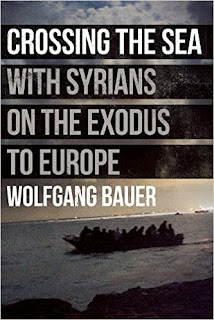 There was also a great review (which you can read here) for Crossing the Sea: With Syrians on the Exodus to Europe (hb, £15.00, 978 1908276827) by respected migration journalist Daniel Trilling in the Times Literary Supplement. He says the book “exemplifies the best qualities of immersive journalism . . . Bauer’s brave investigation tells us an important truth about the refugee experience.” Award-winning journalist Wolfgang Bauer and photographer Stanislav Krupar were the first undercover reporters to document the journey of Syrian refugees from Egypt to Europe. Posing as English teachers in 2014, they were direct witnesses to the brutality of smuggler gangs, the processes of detainment and deportation, the dangers of sea-crossing on rickety boats, and the final furtive journey through Europe. Combining their own travels with other eyewitness accounts in the first book of reportage of its kind; Crossing the Sea brings to life both the systemic problems and the individual faces behind the crisis, and is a passionate appeal for more humanitarian refugee policies. It’s published by And Other Stories and is out now. 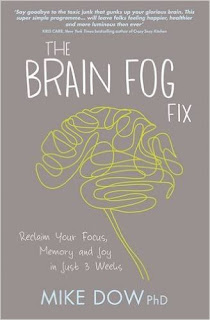 Are you tired and forgetful all the time? We’ve all experienced that foggy feeling – where you suddenly lose track of your train of thought or struggle to find the right word. But while you might shrug it off as a sign of ageing, for many of us, Dr Mike Dow believes these are symptoms of a “new epidemic”. This sense of being “in a slump, a bit detached and disengaged from life” is caused by “the way we eat, sleep, work and live”. The Brain Fog Fix: Reclaim Your Focus, Memory and Joy in Just 3 Weeks (£12.99, pb, 978 1781805923) is published by Hay House and has just had a huge extract and feature in this week’s Mirror – you can read the full piece here. This is really brilliant publicity for the book! The Brain Fog Fix is an easy-to-follow three-week programme designed to help naturally restore three of your brain's most crucial hormones, which Mike Dow believes will enable the rest of your brain's chemistry to reach optimal levels to improve your mood, increase your energy and enhance your spirit. I think we’d all like a bit of that and Mike Dow promises that by the end of his simple programme, you'll be thinking more clearly, remembering more accurately, learning more quickly and unleashing the floodgates of your creativity. The Brian Fog Fix is available now – as a result of the Mirror publicity it is zooming up the charts on Amazon – don’t let them get all the sales!

Love this  – the most bookish episodes in Friends! 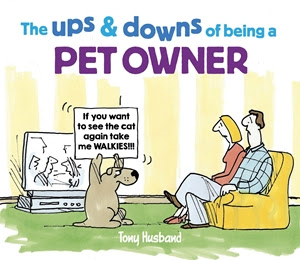 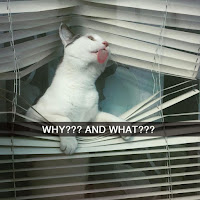 And if a cat is your pet of choice, then you are bound to enjoy this  from our chums at Buzzfeed – truths that only couples who live with a cat will truly understand! 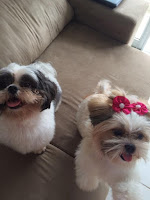 Whereas if you are a dog owner, then this may be more your cup of tea – 12 thoughts your pooch has definitely had! 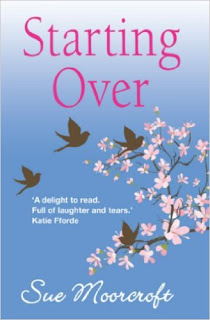 Are you missing out on sales because of "snobbery"? The MD of publisher Choc Lit, Lyn Vernham believes this may well be the case. She feels that many booksellers are "reluctant" to stock and promote "high quality women's fiction and romance" and this is playing into the hands of their online rivals. "Too many booksellers are missing a trick," Vernham said. "A lot of bookshops are very passionate about their product and what they sell – but they sell what they read and they’re probably unlikely to read women’s fiction and that content. Therefore, they’re probably reluctant to sell it. But at the end of the day, they’re giving Amazon such a huge advantage, they’re making it so easy for them because there’s no snobbery, they’ll just sell whatever they want. For our readers, they’re not intimidated in any way [shopping online], but when they go into a bookshop and look for a book that has a pretty pink cover, they feel intimidated so they buy it online because they don’t feel welcome in the stores." 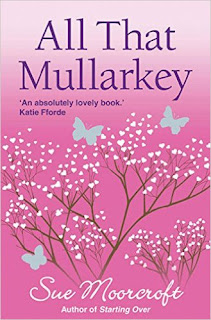 Vernham added: “I think the industry as a whole looks at the romance reader and thinks perhaps that they are a stay-at-home mum, or very young, but the way that we choose our novels is through our tasting panel and over the seven years [we've been operating] we’ve managed to gain lots of information about who our readers are." Choc Lit selects titles to publish through its ‘tasting panel’ which is made up of readers. Speaking of the composition of Choc Lit's readers, Vernham said: "It's fair to say a bookseller wouldn't sniff at such customers walking through the door. As you would expect, most - but not all - of our readers are women, but they are also in the main, professional and with money to spend. Altogether 87% are aged between 26 and 64 - very much in keeping with the profile of today's bookshop customers.”  Vernham said: "The issue that we have is that through the last seven years, our customers know that they can’t get our books in bookshops, so they don’t go there. So we have to work together to try and drive people into those bookshops, and that’s a bit of work that we need to do as well as the bookshops. We need their support in order to do that.  I think that we – as an industry – need to make those shops more welcoming, more diverse and able to offer more choice." 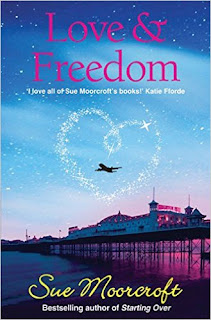 Books have generated many memorable quotations – as have films of course. This is fascinating – a look at some of the most memorable lines in films that almost never happened!
That’s all for now folks! More next week!
This blog is taken from a newsletter which is sent weekly to over 700 booksellers as well as publishers and publicists. If you would like to order any of the titles mentioned, then please talk to your Compass Sales Manager, or call the office on 020 8326 5696.