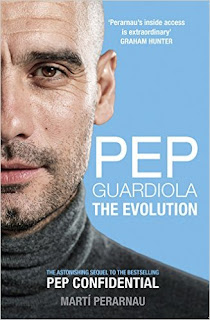 Following Man City’s thrilling defeat of Barcelona this week, there’s been Pep-mania across the media which could not be better timed for the publication of Pep Guardiola: Evolution by Marti Perarnau, (pb, £14.99, 978 1909715493) which is out from Arena Sport today! There will be an author interview in the Sunday Times this weekend and there have already been recent extracts and features in the Mail on Sunday, the Sun and Sports Illustrated a well as on Marca.com and Gola.com which you can see here.  Pep Guardiola: Evolution is more than the story of this extraordinary man’s three seasons with one of the biggest clubs in the game. It is a portrait and analysis of a manager and the footballing philosophies that have beguiled the world. This title is all set to be as big a bestseller as Pep Confidential, the critically acclaimed account of Guardiola's first full season at Bayern was; so do make sure you’ve got it on display!


Talking of footie – I love this   –  the top, most totally epic own goals ever scored! 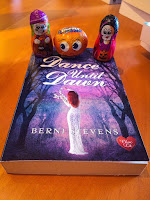 I hope Halloween was good to you and your bookshop, there were some great window displays around the country! We loved the Choc Lit online Halloween promotion – a round-robin Hallowe’en Faerie Tale with five of their top authors each writing a chapter every day, followed by giveaways, competitions and prizes for all readers! What a great way to introduce your readers to some new authors. 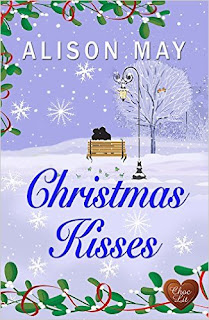 Choc Lit are excellent at seasonal promotion – and here’s a real cracker from them which is the perfect stocking filler for the many women who love a good old fashioned romance to read over the holiday season. Christmas Kisses by Alison May (pb, £7.99, 978 1781893234) comprises three short novellas; three women and three perfect kisses all wrapped up in one enticing paperback – one of the stories, Cora’s Kiss, was shortlisted for an award in the Romantic Novelists' Association 2016 Romantic Novel of the Year. There’s a lot of love online for this one – it has a very cute cover which would look great on your Christmas books table! Here's Alison with her new book! 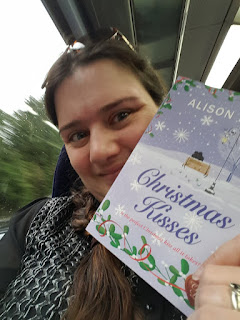 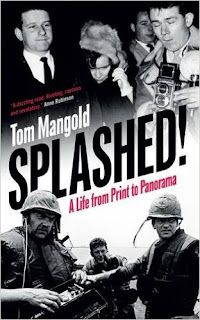 Splashed by Tom Mangold (978 1785901706, £12.99, pb) just been published by Biteback and there’s quite a bit of publicity coming up. There was a mention today in the Daily Express; there will be an author interview in the Sunday Times’ News Review this weekend, and Tom will also be interviewed on LBC as well being on BBC Radio 5 Live on the 15th November and on BBC Radio 4’s Midweek with Libby Purvis on 7th December. Tom Mangold is known to millions as the face of BBC TV's flagship current affairs programme Panorama and as its longest-serving reporter. Splashed: A Life from Print to Panorama is not a conventional journalist's autobiography but a compelling, hilarious and raucous revelation of the events that have marked Tom’s extraordinary life in journalism. He describes his National Service in Germany, where he worked part-time as a smuggler, through his years in the 1950s on Fleet Street's most ruthless newspapers; as well as covering his forty years as a broadcaster, developing a reputation for war reporting and major investigations. 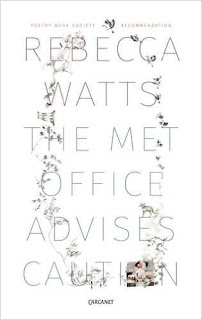 Rebecca Watts’ poem Turning from her intelligent, witty, warm-hearted debut collection The Met Office Advises Caution (pb, £9.99, 978 1784102722) was the Guardian Saturday Poem last weekend.  You can read the whole piece here but I’m going to reproduce it in full since it’s such an evocative portrayal of the lovely autumn season we’ve had this year. The Met Office Advises Caution was published in September by Carcanet. 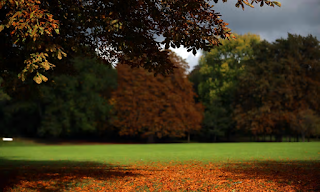 Now it’s autumn
and another year in which I could leave you
is a slowly sinking ship.
The air has developed edges
and I am preparing to let myself lie
in a curtained apartment,
safe in the knowledge that strangers
have ceased to gather and laugh
in the lane below
and the brazen meadow no longer
presumes to press its face to the window
like an inquisitor.
Soon even the river will evince a thicker skin,
my breath each morning will flower white,
and all of summer’s schemes will fly like cuckoos.
The leaves are turning and the trees
are shaking them off. Bonfire smoke
between us like a promise lingers. 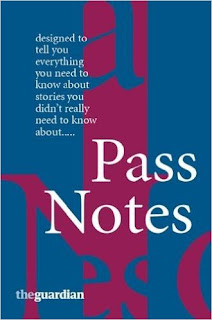 Pass Notes is one of the Guardian’s longest running and most popular regular features. It is published four times a week is currently billed as “A quick chat designed to tell you everything you need to know about a story you don't need to know about.” The format is a question-and-answer dialogue between two people, one of whom asks rather dumb questions about the subject, which can be anything from real people, to buildings, countries, food or more abstract entities. It usually ends with "Do say" and "Don't say", followed by witty remarks one should or shouldn’t say about that day's subject. It has been around since 1992, and is now a much-imitated format. A paperback collection of Pass Notes is out this week bringing readers the very best of this highly amusing column. It focuses mainly on modern times but also delves into the archives for some classic entries and would make the ideal stocking filler for all Guardian fans – just to remind you, that’s almost 9 million readers in print and online! Pass Notes (pb, £9.99, 978 903385487) has an intro by Tim Dowling and is published by Galileo.

Recent Pass Notes have included briefings on Prince Harry’s new squeeze, bomb-detecting spinach, Essex girls, Wallonia and the benefits of being a pudgy dad! Have a look here to swot up! 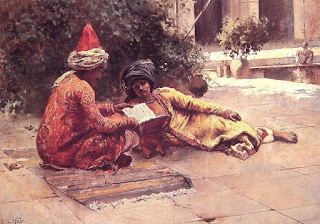 An interesting story in the news this week from the United Arab Emirates who have passed a new law – and it’s one that may surprise you! Described as the first of its kind, the United Arab Emirates’ new National Law of Reading which is intended to “make reading a daily habit” was announced by its president, Sheikh Khalifa bin Zayed al-Nahyan, earlier this week. It will allow government staff time to read at work and will also oblige coffee shops to offer reading material for their customers, said Dubai’s ruler Sheikh Mohammed bin Rashid al-Maktoum, and will see branches of libraries opened in malls, as well as exempting books from fees and taxes. You can read all about that story in the Guardian here. Come on Teresa, stop mucking about with legalities of Brexit and start passing a national law of reading – I think it would be a lot less controversial! 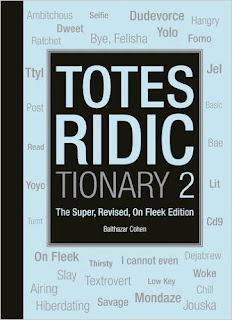 It’s always interesting to see what the Collins Dictionary will come up with as their Word of the Year – no surprises really that this year’s winner was Brexit – closely followed by Trumpism and hygge. I think we all know however, that if you really want your vocabulary to reflect the happening and trendy hipster that you clearly believe yourself to be; then what you need is a copy of Totes Ridictionary 2: The Super-revised, On-fleek Edition by Balthazar Cohen (hb, £12.99, 978 0859655491) which is published at the end of this month by Plexus. The language of texting and internet slang is no longer confined to comfort of the screen, but has succeeded in creeping into our day to day conversations and Totes Ridictionary 2 is more than just a guide to teen slang. It is also a pocket-sized youth culture bible, that offers insight into the origins behind the latest phrases and the contexts in which to use them There are appearances from celebrities and conversations between popular historical figures as Balthazar Cohen explores the connection between technology and language, in both a positive and negative light. Some feel that our precious English language has been ruined by slang and long for a #throwback to a more hashtag-free time. Cohen offers a satirical take on slang, and, in a more implicit way, takes a look at the role that irony and humour play in the popularisation of these phrases: For instance, there are only so many times you can use “lol” as an ironic alternative to actually laughing out loud, or pose for ‘‘ironic’’ selfies until all sense of irony is lost. Totes Ridictionary 2 is a fun, witty read that can be appreciated by members of all generations. 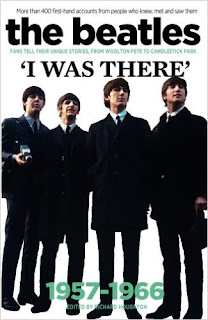 Loads of publicity coming up for The Beatles: I Was There by Richard Houghton (pb, £15.99, 978 1 9059 5994 5) published by Red Planet. This fab book contains more than 400 first-hand accounts from people who knew, met and saw them.  This is not just a fantastic book about the Beatles. It is also a unique document of the 60s – a great big slice of rock music heritage. It documents the Beatles when they were at their world-conquering best. And it does so through the eyes of more than 400 of their fans, all telling their personal tales of when they saw the Beatles live in concert – both in the UK and the US. Packed with vintage 60s memorabilia and never-before-seen photos of John Lennon, Paul McCartney, George Harrison and Ringo Starr; I Was There: The Beatles Live is a lovingly designed time-capsule, a portrait of an era. It’s as close to actually being at a Beatles gig as you’ll ever get! Richard Houghton will be talking about his book next week on BBC Berkshire, BBC York, BBC Oxford,  BBC Hereford & Worcester,  BBC Wiltshire,  BBC West Midlands, BBC Wales and  BBC Belfast. There will be features in the Scottish Sunday Post and the Scottish Sun as well as a Daily Mail feature next week or the start of the week after.
So, let’s end with the fabulous foursome – here’s a medley of the top fifty Beatles songs of all time – all in 12 minutes!

Compass is on Twitter! Follow us @CompassIPS. Here are some of our favourite tweets from this week...


Andrew Smith @WaterstonesPicc Delighted to see The Speech on your thrillers table. Would be very happy to come in and sign copies if it helps. @urbanepub


Blackwells Oxford @Blackwells Oxford Do you like maps, the history of Oxford, and really really beautiful books? Well, you should come to this event then. Go on. Dan McCannell: Mapping the City.


IPG ‏@ipghq Learn more about the IPG's great supplier members in our ongoing blog series. Latest to feature is @CompassIPS


Freight Books ‏@FreightBooks Hurrah for all the literary types on #ListHot100, & thanks to @thelistmagazine for always highlighting the most exciting bookish happenings.


And Other Stories ‏@andothertweets Humour, according to @VillalobosJPe, is 'a weapon against power'. @theskinnymag on I'll Sell You a Dog


Galileo Publishing ‏@Galileobooks Does The Guardian's Pass Notes make you laugh? Then our collection of the best will make you seriously happy. Do say: Just published ...


Matthew at Urbane ‏@urbanepub #NationalAuthorsDay What can I say? It would all be utterly pointless without you - keep writing those wonderful words!


Comma Press ‏@commapress 'In the age of Trump and Brexit, publishing has never been more important in the promotion of tolerance' M Moushabeck, Sharjah International Book Fair


This blog is taken from a newsletter which is sent weekly to over 700 booksellers as well as publishers and publicists. If you would like to order any of the titles mentioned, then please talk to your Compass Sales Manager, or call the office on 020 8326 5696.