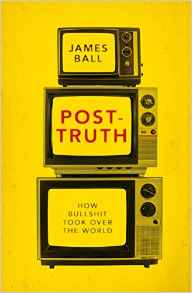 2016 marked the dawn of the post-truth era. The year’s two shock election results, highlighted many of the same issues; but, more than anything they heralded an unprecedented rise of bullshit. Of course, sophistry and spin have been part of politics forever, but the modern era has taken it to a whole new level. Millions were fed false reports that Hillary Clinton ordered 30,000 guillotines to use on her opponents following her victory, while Trump claimed he “never said that” about speeches recorded on video. In the UK, the Leave campaign's divisive claims about £350 million extra funding for the NHS and “swarms” of new EU immigrants from Turkey proved pivotal to the referendum result. Post-truth is bigger than fake news and bigger than social media. It's about the slow rise of a political, media and online infrastructure that has devalued truth. Post Truth: How Bullshit Took Over the World (pb, £9.99, 978 1785902147) is published by Biteback in May and delves into the reality of exactly why this nonsense gets you noticed and makes you rich. It’s by James Ball, an author who really knows his shit – he’s currently special correspondent at BuzzFeed UK and was previously special projects editor at the Guardian, playing a key role in the Pulitzer Prize-winning coverage of the NSA leaks by Edward Snowden, as well as well as also working in investigative journalism at the Washington Post.
Well, I think what we need is  this  –  Karl Pilkington’s Bullshit Superman – that would put a stop to it! 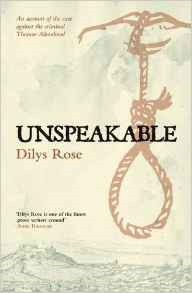 Literary historical fiction based on true stories is definitely having a bit of a “moment” – and those readers who loved titles such as Burial Rites will probably enjoy Unspeakable – the brilliant third novel by acclaimed author, Dilys Rose which has just been published by Freight. This is a fictional account of the true story of Thomas Aikenhead, the last man in the British Isles to be tried for blasphemy, who was executed in Edinburgh in 1697. You can read an interview with Dilys Rose about this fascinating historical novel here . This is a beautifully written and thought provoking evocation of Edinburgh in the late 17th century; a centre of religious authoritarianism, intolerance and fear where the flames of the city's famous Enlightenment are yet to burn. 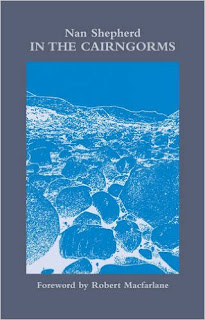 We mentioned the fun new podcast A Hitchhikers Guide to Scottish Literature last week, and the February edition discusses Nan Shepherd’s The Living Mountain – her reflection on her experiences walking in the Cairngorm mountains. you can listen to it here.  It feels like Nan Shepherd has been a bit of a cult classic for too long, and with her addition to the Royal Bank of Scotland five-pound note, as well as several beautiful new editions of her three novels now making their way into bookshops, she is having a much-deserved resurgence. Hill-walking was her great love; and her single collection of poetry In the Cairngorms (978 1903385333, £9.99, pb), which she wrote in 1934 is published by Galileo.  They are poems written with the perception of one who has climbed the mountains, truly knows them and express an intensity of deep kinship with nature.  As Robert Macfarlane wrote: “most works of mountain literature are written by men, and most of them focus on the goal of the summit. Nan Shepherd's aimless, sensual exploration of the Cairngorms is bracingly different." In this atmospheric collection, rocks, burns, wildlife and plants are given real presence and by allowing herself to be absorbed into the totality of the mountain Shepherd discovers her true essence. In addition to the hill poetry, In the Cairngorms includes some intensely felt love poems and is illustrated by some lovely line drawings. It has a foreword by Robert Macfarlane. 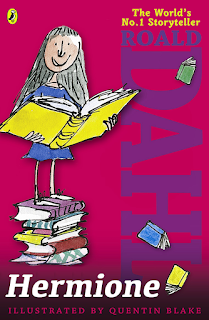 This is  fun –  Harry Potter as if written by other authors. “It is a truth universally acknowledged that a young wizard in possession of a good fortune must be in want of a wand.” From those merry funsters over at Buzzfeed! 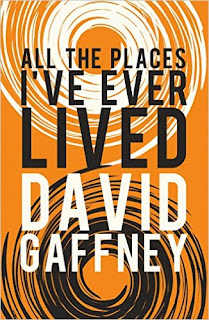 Part murder ballad, part ghost story, part true crime, All The Places I've Ever Lived takes you on a gripping journey from the small-town murder of a teenage girl in the 1970s to the recent real-life shootings in Whitehaven, West Cumbria. Are the crimes linked? Fifteen-year-old Barry Dyer may have the answers, but when events impact so horrifically on a town and its people, it always pays to tread carefully when revealing the truth... Quirky, disturbing, and haunting, All The Places I've Ever Lived is a moving and tender exploration of a teenage outsider in a small community, as well as being a finely wrought portrayal of neglected industrial settlements, where nuclear plants, thermometer factories and chemical works contrast vividly with the desolate beauty of the Lake District. David Peace meets Murakami in award-winning writer David Gaffney's compelling mash up of Twin Peaks weirdness and peri-urban noir. 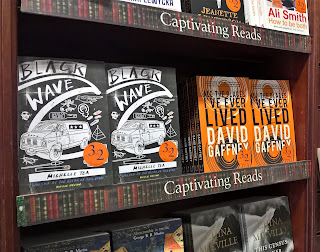 You can see it here nestling up against Michelle Tea’s fabulous Black Wave (from And Other Stories) in a Captivating Reads Promotion in Blackwell’s Oxford. David Gaffney has been praised by the Observer for his “ruthless eye and pitch-black humour” and All The Places I've Ever Lived (pb, £8.99, 978 1911331063) has just been published by Urbane. 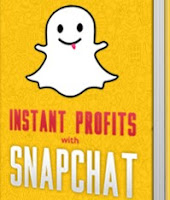 Snapchat has been much in the news recently – but can we publishers and booksellers harness its power to help us promote books? Have a look here at this thought-provoking report from The Book Machine which suggests that maybe we can… 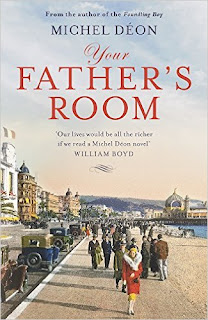 Born in Paris in 1919, Michel Déon, the author of more than 50 works of fiction and non-fiction which offered a witty, panoramic view of French society and history; died at the end of last year in Ireland aged 97. You can read a piece about him in the New York Times here. I am very much looking forward to the publication of his fictionalised memoir, Your Father’s Room (pb, £8.99, 978 1910477342) which is coming from Gallic in June.  A vivid recreation of the interwar period, this is a touching and very true depiction of boyhood and how our early experiences affect us as Édouard (Michel Déon's real name) looks back on his 1920’s childhood spent in Paris and Monte Carlo. Within a bourgeois yet unconventional upbringing, 'Teddy', an observant and sensitive boy, must deal with not just the universal trials of growing up, but also the sudden tragedy that strikes at the heart of his family.
If 1920’s Paris is something that appeals to you, then you’ll probably enjoy this five-minute collection of highly evocative film clips from the period!

International Women’s Day this week – and I love this idea – Loganberry Books Cleveland in the USA has turned all the books written by men page side-out to illustrate the colossal gender gap in male and female authors. Have a look here at what that looks like – a veritable white-out on the shelves, which delivers a real wallop for anyone shopping at the store! 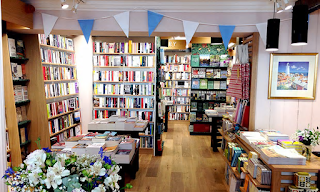 And if you’re one of our many friends out there running an independent bookshop, do you feel threatened by small, unbranded Waterstones stores “pretending” to be indies? The bookselling giant has opened three unmarked outposts in small towns and while some retailers say anything that puts books on the high street is a good move, others are not convinced. The chain has come under fire for opening three unbranded branches in the past three years – Southwold Books in Suffolk, Harpenden Books in Hertfordshire and The Rye Bookshop in East Sussex where the handwritten signs in the windows are the only overt indication that the three belong to the bookselling behemoth. Southwold shopkeepers told the Telegraph that Waterstones had “crept in” on the quiet, accusing the company of dishonesty. One said that if the shop had a large Waterstones sign on the front, “the whole town would have been up in arms.” You can read more about that story in the Guardian here. 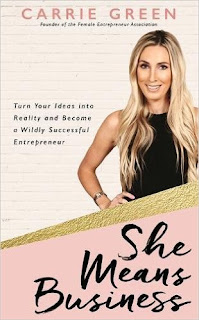 She Means Business: Turn Your Ideas into Reality and Become a Wildly Successful Entrepreneur (£10.99, pb, 978-1781807408) by Carrie Green is zooming up the bestseller charts on Amazon – don’t let them get all the sales for this inspirational title which has just been published by Hay House. With a computer and an internet connection you can get your ideas, messages and business out there like never before and Carrie Green knows what it's like to be an ambitious and creative woman with big dreams and huge determination but she also knows the challenges, the fears and blocks that entrepreneurs face. Based on her personal, tried-and-tested experience, she offers valuable guidance and powerful exercises to help readers achieve a clear business vision, understand their audience, create your brand, maintain focus and achieve success! She Means Business provides the honest, realistic and practical tools to bring your vision to life. Carrie Green was named an entrepreneurial rising star by HRH The Duke of York after winning The Change Makers Award and in 2014 won Entrepreneurs’ Champion of the Year Award. She’s been featured on BBC News, and in Glamour and Stylist magazines and her TED Talk, Programming Your Mind For Success, has had nearly three million views! You can watch that here on Youtube. This author has a LOT of fans and She Means Business gets uniformly 5-star reviews on Amazon – comments such as “Having read many books in this genre I can honestly say that this is the greatest business book of our time” are typical – so I would certainly urge you to stock it!!
Never mind the greatest business book of our time – what would you say is the greatest business movie of our time? Have a look here  at the Top Ten films about business – from Jerry Maguire to Wall Street!

That’s all for now folks! More next week!
This newsletter is sent weekly to over 700 booksellers as well as publishers and publicists. If you would like to order any of the titles mentioned, then please talk to your Compass Sales Manager, or call the office on 020 8326 5696.
Posted by Compass Rose at Friday, March 10, 2017