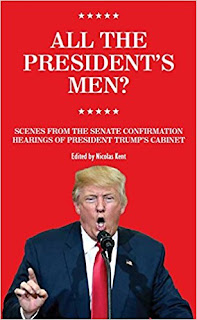 In January, one week before the President's inauguration a fierce fight erupted in the Senate between Republicans and Democrats over the confirmation of the key figures for President Trump's cabinet. In front of four separate Senate committees the nominees were subjected to tough and relentless cross-examination and questioned forensically about their ethics, beliefs and political philosophies. Each of them had to fend off accusations ranging from corruption to deceit or racism. These gripping and dramatic verbatim Senate sessions gave a vital insight into the future policies and direction of Trump’s presidency and a verbatim account of the confirmation hearings of four key cabinet members is published next week by Oberon as a play text: All the President’s Men? (pb, £9.99, 978 1786822116) edited by Nicholas Kent. Also next week, the National Theatre will present a staged reading of All the President’s Men? for one night only at the Vaudeville Theatre in London – which has now completely sold out; you can find out about that here.  A top cast (which you can see here ) are performing, and we expect the event to be very well covered by the media. I think there will be very strong demand for this paperback – it is a tremendously dramatic and effective way of presenting real life drama – and as I say, the National Theatre presentation of it is likely to get a lot of coverage. There will be loads of people who would like to have seen it but couldn’t get tickets – this book is for them! 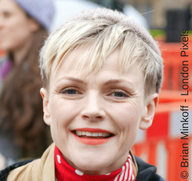 Manchester based independent publisher Comma Press have just appointed two new patrons – the very wonderful Maxine Peake and Courttia Newland. Peake said she was "really honoured" to be asked to be a patron for the publisher. "Comma are cultural and political trailblazers, and I’m looking forward to working with them to promote great writing talent, both from this region and beyond." Literary activist, author and playwright Newland added that he is "thrilled" to be working with the publisher. "The timing couldn't be better for me to become a patron for Comma Press", Newland said. " I'm so thrilled to be working with a publishing company that sees the enormous merits of the short story, and is committed to putting their political money where their mouth is. I look forward to exciting times ahead pushing the boundaries for writers and readers alike." You can read the full story in the Bookseller here.

Many congratulations to Freight whose title A Drink of One’s Own: Cocktails for Literary Ladies by Laura Becherer and Cameo Marlatt has just been shortlisted for two Scottish Design Awards, Best Publication and Best Use of Illustration. This is such a fab idea for a book: 50 cocktails each inspired by famous women writers from around the world, are presented with cocktail recipes and literary profiles of the writers that inspired them. You can discover the delights of the Sylvia Plath, the Virginia Woolf, the Simone de Beauvoir, the Zelda Fitzgerald, the Angela Carter, the Jane Austen, the Marguerite Duras and many more in this beautifully conceived and presented gift book celebrating the very best in women's writing, with beautiful illustrations and photography of many of the cocktails. In addition to a 5-page feature in the Herald, a big article has also appeared in the Stylist which you can read here. Why not try out some of the recipes this evening – just the thing for a bookseller’s Friday night tipple! 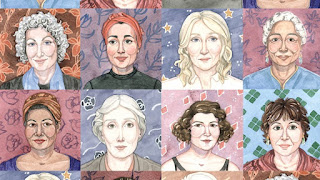 This seems like a very good opportunity to watch this short scene from one of my favourite films, Woody Alan’s Midnight in Paris where the hero meets Zelda Fitzgerald – and yes, she is drinking a cocktail! I wonder if it’s the one featured in A Drink of One’s Own?

How much do you know about sex? No, really! Well, a new book out from Hay House on 30 May believes that pretty much everything we think we know; is incorrect. Real Sex: Why Everything You Learnt About Sex is Wrong (£12.99, pb, 978 1781808245) feels strongly that the more modern culture shines its light on sex, the longer the shadow it casts. This shadow of commercialism, pornography and shame leads to performance pressure, increasing numbers of sexual 'dysfunctions' and a fundamental disconnect from ourselves and others. Authors Mike and Louise Lousada believe that sexuality is one of the most important paths to happiness, simply because it requires us to engage all the other aspects of ourselves. Real Sex will show you how almost everything that our society has tried to teach you about your sexuality is misleading or simply inaccurate. It sets out seven keys that will teach you how to love and accept your feelings and desires at a deeper level, leaving behind feelings of guilt, insecurity and shame. Real Sex offers a new, integrated idea of sexuality that holds a positive perspective of the intimacy and aliveness that we know deep down makes our lives meaningful. Mike and Louise Lousada are experienced sexual therapists – you can find out more about them on Mike’s website www.mikelousada.com  Real Sex will be featured in the May issue of Red magazine and a quiz designed by Mike and Louise will appear in Woman’s Way. They have already had articles published in the national press and have spoken about their work on Radio 4. 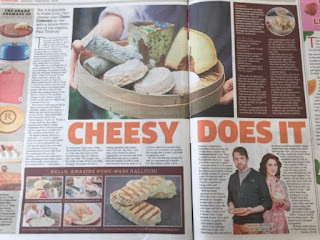 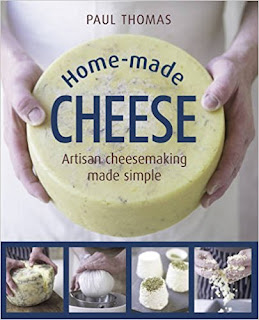 There was a brilliant full colour double page spread by Paul Thomas on making your own cheese in this week’s Metro – as seen above!  Homemade Cheese: Artisan Cheesemaking Made Simple (hb, 978 0754832423, £14.99) published by Lorenz features 40 classic cheeses, including mozzarella, cheddar, halloumi, stilton, and brie, and tells you exactly how to make them! It is a fantastic price, and the full colour spreads are informative, easy to follow and beautiful to look at – you can see some below. It covers the importance of food safety and hygiene; where and how to source milk; plus essential techniques such as milling, draining, pressing, salting, rind-washing, maturing and storing. And, if you get stuck, there’s a user-friendly troubleshooting section! There are over 475 beautiful photographs in this title – and it shows you exactly you can develop your cheesemaking skills whatever your previous experience or level of expertise! Getting all “artisanal” and making your own stuff is a massive foodie trend right now that looks set to stay around for a while – and this is the best book on the subject. You can find out more about Paul Thomas on his Twitter account @wheymaker here. And you can see Paul showing us how to make some scrummy looking ricotta here at his School of Artisan Food.

Well, that was pretty good. But what are the five best cheese moments available on YouTube I wonder? Here’s a fairly obvious one – what are the Top Ten Cheeses and what’s number one? Find out here! I quite enjoyed this from BuzzFeed – a quiz where punters try to tell expensive cheese from cheap. What about the Cheeseball Bath Challenge here ? Is this funny?? Can 12 million viewers possibly be wrong? If you’re feeling hungry then DON’T watch this  – a 40 second clip of gorgeousness from the raclette restaurant in New York. But the top cheese moment of all time must surely be this one – don’t forget the crackers Gromit! 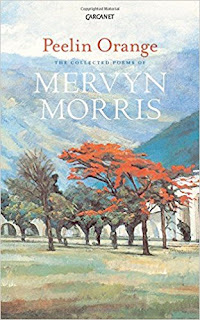 Jamaican Poet Laureate Mervyn Morris will be doing a UK tour shortly, which will celebrate the end of his tenure as (he officially hands over to Lorna Goodison in May), his 80th birthday and the release of the definitive collection of his poems, Peelin Orange (978 1784104580, £14.99, pb) which has just been published by Carcanet and explores his Jamaican heritage with trademark musicality, often drawing upon Creole dialect. On Saturday 29th April, he’ll be at Waterstones Piccadilly, as part of their Writers of the World festival – you can find out more about that here.  On Tuesday 2nd May he’ll be doing a reading at Waterstones in Bristol, which you can find out about here.  On Wednesday 3rd May he’s at the John Rylands Library, in Manchester –  that info is here -  and then on Thursday 4th May he’s back in London at the George Padmore Institute for an exclusive in-conversation with Kei Miller about his life and distinguished writing career from pre-independence Jamaica to post-colonial times. Mervyn Morris is also likely to be soon reading some of his poems on Radio 4’s Front Row and Radio 3’s The Verb. 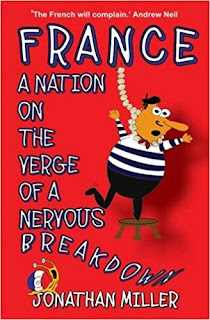 We’re getting ever closer to the French Presidential elections – and as a result there’s been lots of recent publicity for France: A Nation on the Verge of a Nervous Breakdown. (978 1783340842, pb, £8.99) by Jonathan Miller which is published by Gibson Square. There’s a big piece in the Spectator coming tomorrow, and there have already been articles on this title in the Telegraph, the Western Daily Press, the Sunday Mirror the People and on the BBC and Today FM.  Former Sunday Times journalist, Jonathan Miller believes that the image the French have of being savvy, sophisticated and elegant is entirely wrong, and this is a nation who lecture the world about haute cuisine yet eat more MacDonald's than anywhere else in the world; roll their eyes at foreign culture even as CSI is their most watched TV programme and pretend to be literary even as Fifty Shades of Grey is France’s bestselling book! Miller believes he has uncovered the true France – one where its people live in a feverish state of fantasy, are paid to pretend to work, pretend to strike, and generally think work causes depression and suicide. Dental hygienists are illegal, yet the French exchange a staggering 184 billion kisses every year. While preaching liberté, the State forbids everything, is run by one school’s alumni, and messes up over two thirds of the economy! Zut alors! As Andrew Neil said of this book: “the French will complain” –  but everyone else will probably love it!
And just to prove that no one knows more about what it means to be French than an Englishman – let’s finish by watching the top ten best moments from that master of la comédie française; Peter Sellers – what a genius!

That’s all for now folks! More next week!
This blog is taken from a newsletter  which is sent weekly to over 700 booksellers as well as publishers and publicists. If you would like to order any of the titles mentioned, then please talk to your Compass Sales Manager, or call the office on 020 8326 5696.
Posted by Compass Rose at Friday, April 21, 2017