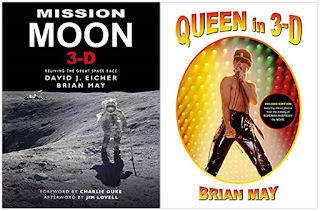 Who saw Brian May on Lorraine this week – you can watch it here. She opens the interview by picking up Mission Moon (hb, £30, 978 1999667405) and saying “this is a cracker” – then goes on to wave around Queen in 3D (hb, £30, 978 1999667429) to the cameras saying “this is a remarkable book!” Please, oh please can all book publicity be as targeted and fabulous as this! With blockbuster films First Man and Bohemian Rhapsody both out this autumn (and remember Queen in 3D has been updated to include scenes from the making of the film photographed on set in 3D by Brian May) both of these titles are really set up now to be HUGE bestsellers! 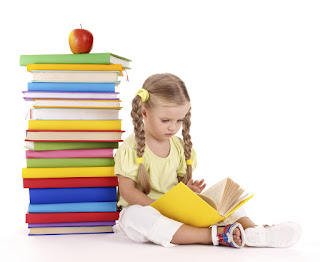 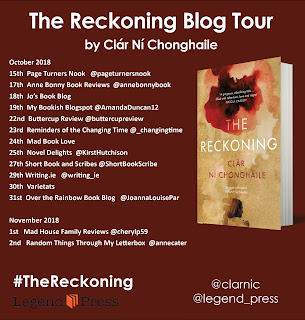 In a cottage in Normandy, Lina Rose is writing to the daughter she abandoned as a baby. Now a successful author, she is determined to trace her family’s history through the two world wars that shaped her life. But Lina can no longer bear to carry her secrets alone, and once the truth is out, can she ever be forgiven? Clar Ni Chonghaile weaves a complex narrative in The Reckoning (£8.99, pb, 978 1787198142) which has just been published by Legend, covering conflict, secrets, judgement and what it takes to sever family ties. There’s a wide-ranging blog tour coming up for this which includes Page Turners Nook, Anne Bonny Book Reviews, Jo’s Book Blog, My Bookish Blogspot, Buttercup Review, Reminders of the Changing Time, Mad Book Love, Novel Delights, Short Book and Scribes, Writing.ie, Varietats, Over the Rainbow Book Blog, Madhouse Family Reviews and Random Things Through My Letterbox. 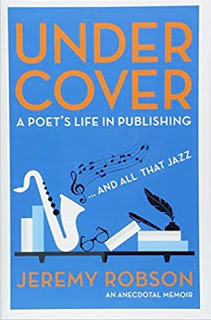 Publishers tend to have plenty of cracking tales to tell about their famous authors – most of which are usually only heard in the bar after a sales conference. Happily, independent publisher, Jeremy Robson has decided to share the best of his in a marvellous new memoir, Undercover (978 1785904097, hb, £25). In it, he looks back at times spent driving Muhammad Ali around Britain, coping with Michael Winner, joyously laughing with Maureen Lipman and Alan Coren, undertaking an exciting poetry reading tour with Ted Hughes, and lots of stories of life-long friendships with poets and writers; including Spike Milligan, Alan Sillitoe, Laurie Lee and Yevgeny Yevtushenko. The Mail are running a serialisation of this book tomorrow – which promises to be highly entertaining! It is packed full of terrific anecdotes – which sadly I can’t quote to you direct until the Mail extract has happened – but trust me, it’s well worth a read and well worth selling! Matthew Parris said it has “jollity, diversity and colour” as well as telling “another story: the struggle to survive and thrive as a small independent publisher in an age of amalgamations and growing corporate size.” Which is very definitely a story worth shouting about. 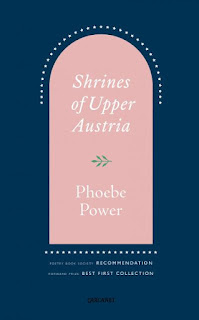 We're so pleased to tell you that Phoebe Power has been shortlisted for the 2019 TS Eliot Prize with her brilliant debut collection, Shrines of Upper Austria. The collection was a Poetry Book Society Recommendation, and also won the Felix Dennis Award for Best First Collection at the Forward Prizes earlier this year - so huge congratulations to Phoebe! The T S Eliot Prize Shortlist Readings are the largest annual poetry event in the UK and will be hosted once again by Ian McMillan on 13 January, in the Royal Festival Hall. You can read more about the prize and see the full shortlist here. 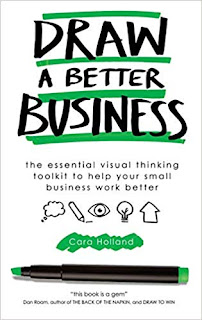 The famous French architect Le Corbusier once said, “I prefer drawing to talking. Drawing is faster and leaves less room for lies.” Le Corbusier would have loved Draw a Better Business: The Essential Visual Thinking Toolkit to Help Your Small Business Work Better (£14.99, pb, 978 1910056639) by Cara Holland which is an illustrated practical guide for freelancers and business people who want to tap into their innate creativity and gain the business benefits. Cara has worked with companies such as TimeWarner, Google and the NHS, and shares empowering tips, tools and insights that will bring the power of working visually to your business. Business leaders are super-enthusiastic about this one, Google’s creative director said “There’s hardly a soul who wouldn’t benefit from the ideas in Cara’s book” and the founder of the Black British Business Awards said it was full of “innovative solutions that will engage your audience and transform your business.” There will be a feature on Cara in the January issue of Diva magazine’s Women on Top section, as well as articles in Mollie Makes, Biz Rocks and the Design Trust. It’s just been published by Practical Inspiration. 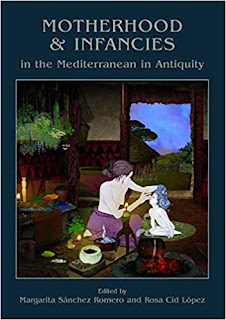 “Motherhood” and “childhood” are social and cultural constructions that have their origins in prehistoric times. A new volume in the Childhood in the Past series from Oxbow; Motherhood and Infancies in the Mediterranean and Antiquities (pb, £40, 978 1789250381) explores images of maternity and infancy, and the identification of women and womanhood in prehistoric and classic societies. Aspects such as socialization, the impact of infant death, the figure of the mother queen, the rules on parental rights, the transgressions of traditional motherhood and the emotional aspects of the mother-child relationship are analysed to gain a deeper understanding of the diversity of women’s agency through history. Oxbow ran a social media promotion for this one this week which got a great response with lots of likes, comments and shares and this is an important contribution to a fascinating subject. 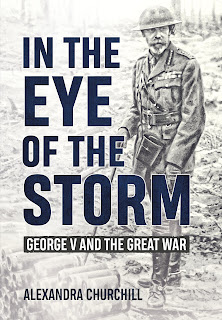 An absorbing new biography of George V by historian Alexandra Churchill reveals that Balmoral Castle nearly became home to Tsar Nicholas II after the Russian Revolution. The royal retreat was considered as a possible residence for the Romanovs after they were overthrown by the Bolsheviks in 1917, but King George thought the Highland estate was too chilly and remote for the Russian royal family and the idea was abandoned along with his offer of asylum in Britain. You can read more about this in the Daily Record here and the book, The Eye of the Storm: George V and the Great War (978 1911628262, £25, hb) has just been published by Helion. There will be an interview with Alexandra on Dan Snow's popular history podcast and hopefully a forthcoming article in the Sunday Times. This in-depth biography reveals how George V went from being a largely unknown entity to both his ministers and his people at the outbreak of war in 1914, to the most visible and accessible sovereign in British history by the end of the decade. Pioneering modern public relations, he had not only established the House of Windsor in name, but in the hearts of his people; establishing a blueprint for the modern monarchy that is still followed today. Published to mark the 100th anniversary of the Armistice, the King’s war legacy is examined in full. He played a key role in the introduction of the two-minute silence and the unveiling of the cenotaph and was the chief mourner at the burial of the unknown soldier. He also became the ﬁrst battleﬁeld tourist when he toured the Western Front in the company of those that won the war. This is a flawless account on the life of a man who has been highly misunderstood and wrongly vilified. 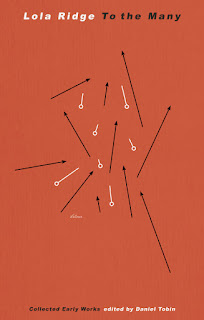 Lola Ridge's Manhattan is the Poem of the Week in The Guardian this week. I encourage you to have a read – there is also wonderful analysis of it by Carol Rumens. An intensely dynamic vision of New York in the early 20th century, Manhattan captures the excitement of a dynamic modern city as well as raising questions about its gilded allure. The poem is taken from her 1918 first collection, The Ghetto and Other Poems, which you can read online. To the Many: Collected Early Works by Lola Ridge has just been published by Little Island Press (pb, £14, 978 0993505645) and there’s a great review of it here saying “It is to be hoped that this publication will hasten the process of recovery and re-evaluation of her work and her place in the interweaving stories of modernism, leftist political poetry and poetry by women.” 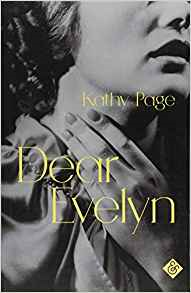 Some terrific reviews for Kathy Page's Dear Evelyn (£10, pb, 978 1911508281), as well as successful appearances by Kathy on her recent UK tour (Battersea Library, Birmingham Literature Festival and Nottingham's Five Leaves Bookshop.) Kathy has also just been shortlisted for the prestigious Writers Trust Awards in Canada and the winner of this $50,000 prize will be announced 7 November. The Guardian Review last weekend described Dear Evelyn as “a love story, a coming-of-age story, and a brilliantly evocative sketch of Britain in the 20th century”; the Times Literary Supplement called it “disconcerting, profoundly convincing” with “the tautness of a thriller” and the Daily Mail praised it as “quietly devastating.” 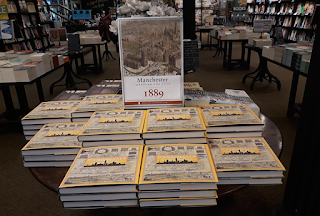 A super launch event and display from Waterstones Deansgate (thanks guys!) for Manchester: Mapping the City (£30, hb, 978 1780275307) by Terry Wyke, Brian Robson and Martin Dodge which has just been published by Birlinn. Manchester is one the world's most iconic cities and this this sumptuously illustrated cartographic history uses historic maps and unpublished and original plans to chart its dramatic growth and transformation  from the late 18th century, through periods of boom and bust in the Victorian period, and its post-industrial transformation in the 20th century. As Waterstones said; this is “an endlessly fascinating and truly beautiful book”. 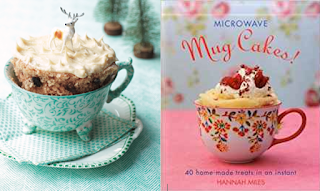 Well – like it or not, the dreaded C word is on its way – and the festive suggestion here from Microwave Mug Cakes (978 0754831365, £9.99, hb) was included in Homestyle Magazine this month. This irresistible book will transform the way you bake, showing you that all you need is a microwave and a mug! The results are remarkably moist and delicious and you can have a lemon drizzle, a carrot, salted caramel, chocolate or the Christmas Pudding cake featured here, all in a matter of moments! It’s published by Lorenz. 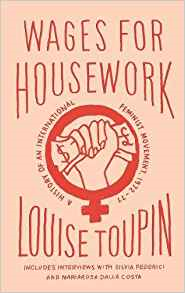 Revolutionary feminism is resurging across the world. But what were its origins? In the early 1970s, the International Feminist Collective began to organise around the call for recognition of the different forms of labour performed by women which paved the way for an influential and controversial feminist campaign. A new Pluto title, Wages for Housework: A History of an International Feminist Movement 1972-77 (£19.99, pb, 978 0745338675) by Louise Toupin looks at the history of this movement, drawing on extensive archival research and highlighting the power and originality of the campaign which encompassed rich theoretical traditions, including autonomism, anti-colonialism and feminism, whilst also challenging the mainstream women's movement. 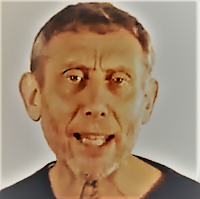 We started with Queen, we’ll finish with Queen. We in the book trade all know and love Michael Rosen. But until recently I had no idea that he had an entire fan-base among today’s teenagers for his hilarious rap memes – of which this (rather rude) version of Bohemian Rhapsody is one of the finest!

This weekly blog is written for the UK book trade. If you would like to order any of the titles mentioned, then please talk to your Compass Sales Manager, or call the Compass office on 020 8326 5696. Every Friday an e-newsletter containing highlights from the blog is sent out to over 700 booksellers – and if you’d like to receive this then please contact nuala@compass-ips.london