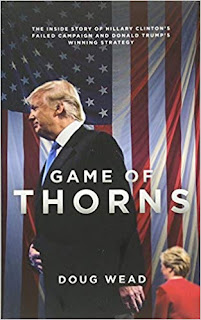 Well, they don’t come much more famous than one Donald J Trump, and yesterday he took it upon himself to kindly recommend a Biteback book, tweeting: “A great new book just out, Game of Thorns by Doug Wead, Presidential Historian and bestselling author. The book covers the campaign of 2016, and what could be more exciting than that?” Indeed Donald, we quite agree and so far, this has attracted 69,000 likes and 14,000 retweets, so I think that qualifies for promotion of the week! Game of Thorns (pb, £12.99, 978 1785902260) is not “just out” – it’s two years old, however it certainly is a bestseller, and it is available now so please do order it! However, The Donald should know better than to ask a rhetorical question of his followers; here are some of the Twitter answers: “Your resignation and subsequent incarceration” “Nancy Pelosi serving your ass on a golden platter was quite entertaining” “More exciting than that: dial-up internet, canned green beans, medically-induced coma, cardigan week on the Home Shopping Network” and “Why do you promote so many books when neither you nor your followers read?” 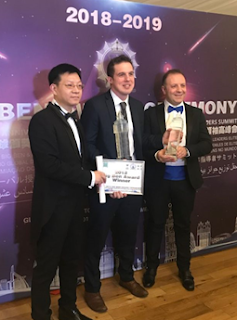 Congratulations to Legend Press Founder and MD Tom Chalmers who last night was announced as the winner of the Global Outstanding Young Persons Award at the Big Ben Awards, which took place at the House of Parliament in London. The awards were founded in 2008 and each year celebrate those who have globally inspired young people through their achievements, with a particular focus on creative entrepreneurs who has forged strong international business and reach. Tom commented: “It is a real honour to receive this fantastic award among so many exceptional and talented candidates.” Well done Tom! 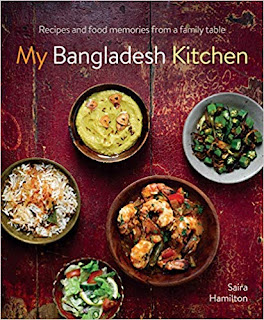 There’s plenty of magazine coverage coming up for the fabulous My Bangladesh Kitchen: Recipes and Food Memories from a Family Table (£20, hb, 978 0754834502) by Saira Hamilton. There will be features in Olive, Food and Travel, IndyEats, Vegan Living and Living North and most excitingly, the book is being extracted in the Times Weekend on Saturday 2nd Feb. Saira is available for bookshop events – her infectious enthusiasm for getting big flavours into your home cooking really sells the book! She was on the Three Counties Radio a couple of weeks ago and her event at the Bishops Stortford Literary Festival late Feb is now totally sold out. She's doing a cookery day at Baythorne Hall, Halstead, Essex, and is appearing at the Chipping Norton ChipList Festival in April. If any bookshops would like to host an event please email Joanna at Lorenz on jlorenz@anness.com 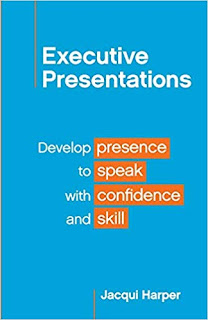 Lots of publicity coming up for Executive Presentations: Develop Presence to Speak with Confidence and Skill (978 1788600163, £15.99, pb) by Jacqui Harper which is just out from Practical Inspiration and is shortlisted for the 2019 Business Book Awards. Jacqui is an international expert in leadership presence and personal branding, and a former BBC News anchor. This book equips executives to give compelling and clear presentations and Jacqui’s rich blend of tools, tips and expert advice will help anyone become a consistently outstanding communicator. There are reviews in HR magazine, The CEO magazine, Financial Management, and #Biz Rocks. Here's a great little video from Jacqui answering three key questions in five minutes: 1) How do I handle nerves? 2) What can you do to increase impact? and 3) What’s the best way to begin a presentation? 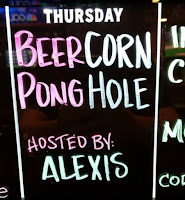 We love a bookshop blackboard telling us all about the cool events coming up! But have a look here for some handwritten signage that has gone seriously wrong – I’m sure no booksellers would make such a hash – but these really made me chuckle! 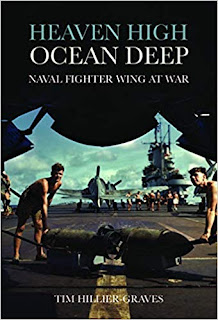 Flying from an aircraft carrier in the Second World War was the most dangerous of pursuits. Even without the threat of enemy action, the likelihood of being killed or maimed was great and when faced with a determined foe, the chances of survival diminished even more quickly. It wasn’t a life for the faint-hearted or the unskilled; naval aviators were the best of the best. Tim Hillier-Graves is a retired Royal Navy officer and his new book Heaven High, Ocean Deep (£19.99, hb, 978 1612007557) will be published by Casemate on 14 February. A fascinating article about the book has just appeared on Dan Snow’s History Hit, which has been extremely popular, and much shared. 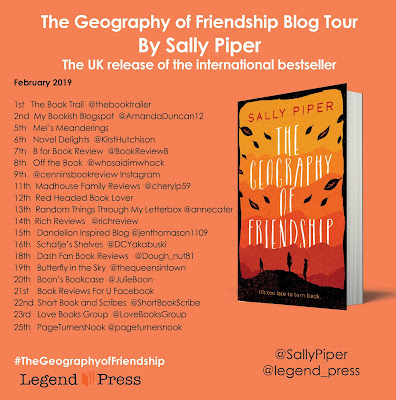 When three women set off on a hike through the wilderness, they are anticipating the adventure of a lifetime. Over the next five days, as they face up to the challenging terrain, it soon becomes clear they are not alone… The Geography of Friendship (£8.99, pb, 978-1789550184) which is out on 1 February from Legend has been a huge hit in Australia and I think is set to do the same here. It was a Women’s Weekly Book Cub Great Read who said “There’s a little bit of Big Little Lies about this deft and powerful study of female friendships under pressure… this lyrical author has a style and tone all of her own which sucks you in and holds you in its seductive embrace, almost unable to breathe… a page-turner… a book dripping in the raw beauty of the Australian landscape.” Sally Piper is about to embark on a month-long blog tour with 22 bloggers, and you can see all the details above. There will also be a review in WI Life (220k subscribers), a piece in the March issue of Writers Forum, and a lot of promo on social media. 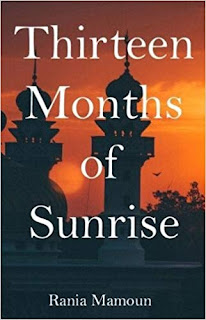 Great to see Sudanese author Rania Mamoun's debut collection Thirteen Months of Sunrise (translated by. Lissie Jaquette, £9.99, pb, 978 1910974391) included in The Mancunions round-up of the Most Anticipated Books of 2019 which you can read here. This is the first major translated collection from Arabic by a Sudanese woman writer and expertly blends the real and imagined to create an intimate portrait of life in Sudan today. From brief encounters to unusual friendships, this startling and evocative debut illuminates human experience and explores the alienation, isolation and estrangement of urban life. 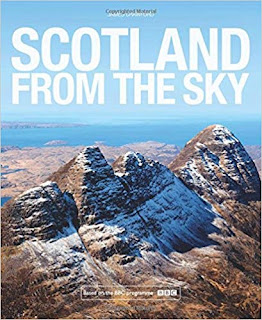 I think most of us were highly amused by this story about the ancient stone circle that wasn’t actually old at all! A “recumbent stone circle” in the parish of Leochel-Cushnie, Aberdeenshire, had been celebrated by Historic Environment Scotland as an authentic discovery until the former owner of the land told them he’d actually built it himself in the mid-1990s! Never mind Historic Environment Scotland, we know you can’t get it right all of the time – and it gives me a chance to re-promote your lovely title Scotland from the Sky (£25, hb, 978 1849172523). This beautiful book draws on the vast collection of aerial photography held in their archives of and tells a remarkable story of a nation from above, taking readers back in time to show how our cities and landscapes have dramatically altered with the ebb and flow of history, and how aerial imagery can reveal (genuine!) treasures from the ancient past. It’s coming in paperback (£14.99, 978 1849177375) in August. 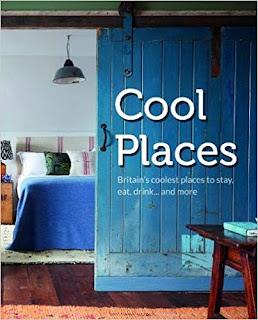 The promotion for Cool Places: Britain's Coolest Places to Stay, Eat, Drink... and More (978 1906889692, hb, £18.99) is about to begin in earnest – it’s due to be featured in the Times on Feb 2 and the Observer on Feb 10. This lavish full-colour guide to more than 200 of the very best places to stay in the UK is based on recommendations from the Cool Places website and has everything from boutique hotels and designer B&Bs to chic country cottages and luxury glampsites. Compiled by Cool Places and Rough Guides founder Martin Dunford and UK travel specialist Jules Brown, each featured place has an incisive first-hand review and all the information you need, uniquely including all the best stuff to do nearby: local pubs, great walks, fun activities, and features on the local entrepreneurs who run their own ‘cool places’ with such passion. 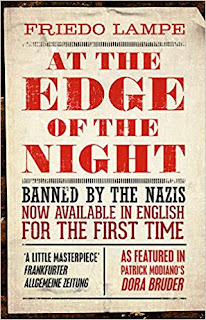 A novel banned by the Nazis in the 1930s for its homoerotic content is to appear in English for the first time next month. At the Edge of the Night (£9.99, pb, 978 1843916543) by Friedo Lampe, was first published in 1933. Poignant and haunting, it is seen today as an early work of magical realism but was seized by the Nazis who objected to the novel’s inclusion of homoerotic content, and its depiction of an interracial liaison between a black man and a German woman. The book was placed on their list of “damaging and undesirable writings”. You can read more about this in the Guardian here . Lampe has enjoyed a growing reputation in Germany, and the novel drew praise from Hermann Hesse, who said that “what struck us at the time as so beautiful and powerful has not paled, it has withstood; it proves itself with the best, and captivates and delights just as then”. Publisher Hesperus said the novel embodied its ambition to recover overlooked gems, and its translator Simon Beattie commented “He’s a very interesting author: a disabled, gay writer during the Third Reich who somehow survived, only to be shot by a Red Army patrol days before the end of the war.” 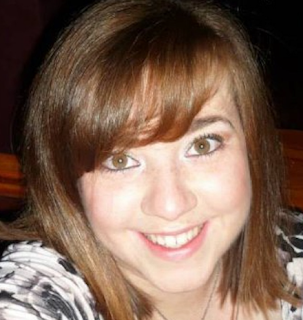 There’s a super interview with De Coubertin publisher Megan Pollard in Strong Words – a new print and online magazine all about books – which is doing very well and is now on sale in WH Smith, so this is great publicity for one of our favourite sports publishers! Megan talks about lots of interesting things: “we try and do books that other people wouldn’t give a chance to.” “Everyone knows the bog-standard autobiography … but it is all those little extra things that you probably didn’t know about them or that you haven’t experienced yourself that adds that bit extra to an autobiography.” “Sometimes though, people who aren’t liked also potentially make a good book, because people like to read about people they don’t like. I know it’s not sport, but just look at Donald Trump. Everything written about him is devoured because people are so interested in why no one likes him.” “The ones that interest me the most are not the usual, stereotypical stories.” If you have a copy of Strong Words magazine in your bookshop then do have a read, it’s really interesting and there’s lots of great promo for De Coubertin’s top titles! A big Pierre Bonnard exhibition The Colour of Memory opened at the Tate in London this week, which has attracted lots of publicity and is going to be massively popular – it is the first major exhibition of Bonnard’s work in the UK since the much-loved show at Tate 20 years ago and runs until 6 May. With perfect timing, Carcanet have just relaunched Gabriel Josipovici’s Contre-Jour: A Triptych After Pierre Bonnard (pb, £12.99, 978 1857544107) with a new cover. This acclaimed novel based on the life of the French painter is told in three parts from the perspectives of Bonnard’s wife, daughter, and the painter himself. It was reviewed this week in the Jewish Chronicle who said “Short, devastating…a brilliant study of the artist’s life. Contre-Jour is Josipovici at his very best and the timing of this reissue is perfect. It offers the chancre to read this astonishing account of art and obsession along with going to the exhibition at the Tate Modern.”

And if you’d like to spend a highly relaxing five minutes spent gazing of some of Bonnard’s most gorgeous work – then you can do that here!