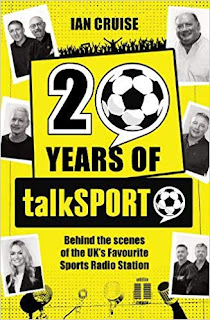 First up this week is Twenty Years of talkSPORT (£12.99, pb, 978 0956328410). Celebrating the 20th anniversary UK's favourite sports radio station, this is a laugh-out-loud, behind-the-scenes, warts-and-all look at the station and its presenters. It brilliantly captures the funniest stories right from the early days and is a highly entertaining read, with contributions from all the top presenters and tales from trips to World Cups and European Championships where the talkSPORT team got into all sorts of scrapes and situations, And of course there are classic clips from callers, presenters, and newsreaders with many hilarious slips and gaffes. There have been ads for this title in the Sun and the Times and this book is an absolute no-brainer gift for sports fans over Christmas. There will definitely be more publicity to come. There were just too many classic stories to fit them all into the 279 pages of “solid gold’ as talkSPORT describe it. So if you’d like to hear one that didn’t quite make the book, here is Ray Parlour talking about Kolo Toure taking out Thierry Henry, Dennis Bergkamp, and Arsene Wenger. 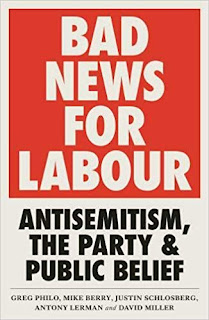 A torrent of “threats” and “abuse”, allegedly levied against Waterstones in Brighton, allegedly resulted in the cancellation of the launch of Pluto’s title Bad News for Labour: Antisemitism, the Party and Public Belief (£14.99, pb, 978-0745340661) on 23 September. Pluto expressed its “disappointment” that “external pressure” had resulted in the cancellation of the event but James Daunt said “we had an event which was being chaotically done, causing quite a lot of emotion and that needed to be handled professionally on our part.” There’s quite a lot to take in about this story, and you can read more about it in The Canary here. The book’s launch was held at the Rialto Theatre instead. Bad News for Labour is described by Pluto as “a ground-breaking study on the reality behind the headlines.” It examines the impact of the media coverage on public beliefs about Labour, replacing media hype with the rigorous analysis of evidence. Raoul Martinez, called it “a necessary corrective to widespread media distortions. Scholarly and persuasive, it rescues the facts from a storm of misinformation.” 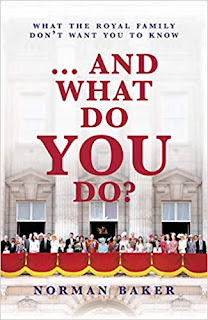 A three-part Mail on Sunday serialisation for And What Do You Do? What the Royal Family Don’t Want You to Know by Normal Baker (£20, hb, 978 1785904912) is starting this weekend (29th September) and will run through to the 6th and 13th October. This is a hard-hitting analysis of the royal family, exposing its extravagant use of public money and the highly dubious behaviour of some among its ranks, whilst being critical of the knee-jerk sycophancy shown by the press and politicians. What makes this book so unusual is that Baker is himself a member of the Privy Council, the body that officially advises the monarch. He also considers the wider role the royals play in society, and the constitutional position of the monarch, which is important given Prince Charles's present and intended approach. 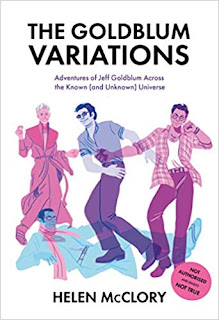 PopMatters have just reviewed Helen McClory's new edition of The Goldblum Variations: Adventures of Jeff Goldblum Across the Known (and Unknown) Universe (978 1912489244, £7.50, pb) saying "McClory has crafted a very fine, lushly sensitive, gently moving series of portraits of a cultural icon." You can read the whole piece here. They call it “the best book I have read this year. And it's September, so that's really saying something. The book is marketed as pop culture/humour, and more loosely as absurdist fiction. It's also very fine hybrid poetry, or flash essays, or any other number of mixed genre labels.” It’s published by 404ink on 24 Oct and you can see the mighty Goldblum himself reading from the book here.  Helen McClory was listed as one of Ali Smith’s favourite underrated authors in the Guardian recently, and you can expect lots more publicity for this title when Penguin publishes it in the US in October; there is big interest in Jeff Goldblum at the moment, he’s become a bit of an icon! This title is a perfect Christmas gift book and talking of gifts, the first five booksellers to email laura@404ink.com with their name and bookshop address and Goldblum in the subject line will get a free reading copy! 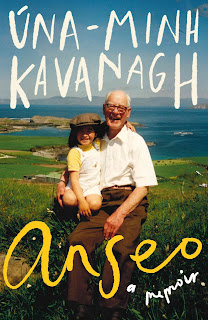 There’s quite a buzz building for Anseo: A Memoir (pb, 12.95, 978184840749) by Úna-Minh Kavanagh which is published by New Island on 24 October. This is a contemporary and unconventional memoir of adoption from Vietnam to Kerry, the love of a small family and the power of the Irish language to overcome loss, racism and online trolls. You can find her on Twitter at Úna-Minh (is my first name) Caomhánach@unakavanagh. 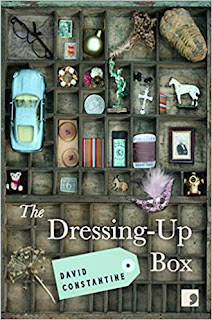 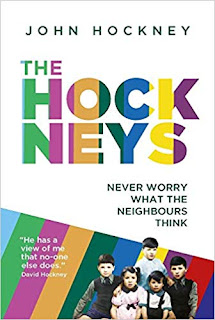 The serialisation of The Hockneys (£25, hb, 978 1789550733) begins this weekend in the Daily Mail. There will also be a BBC local radio interview press day Monday 7th October which includes interviews with BBC Leeds, BBC Northampton, BBC York, BBC Lancashire, BBC Humberside, and articles in the Yorkshire Post and Christies Magazine and events at Salt Mills and the Royal Academy. This unique insight into the lives of the family by youngest brother John, poignantly illustrated by both famous and private pictures and paintings from David Hockney is published by Legend on Tuesday. 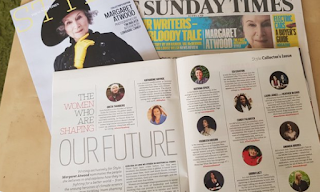 Many congratulations to Heather McDaid and Laura Jones from 404Ink who were named by Margaret Atwood in the Sunday Times recently as two of her “Women Who Are Shaping Our Future”. 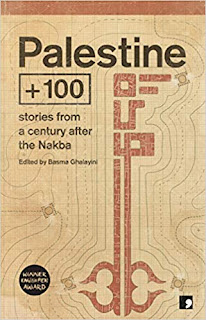 Palestine +100 was reviewed very well by PopMatters, that’s here, who said the collection was "richly imaginative" and "a deeply rewarding addition to the sci-fi canon." 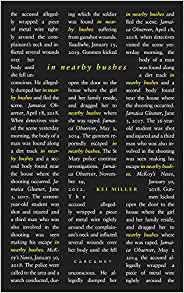 Kei Miller’s In Nearby Bushes (£9.99, pb, 9781784108458) published by Carcanet is the Telegraph Poetry Book of the Month, you can see that  here.  This highly anticipated new collection from a Forward Prize-winner was published by Carcanet at the end of August and contains sequences and single lyrics exploring landscape, legends and histories. 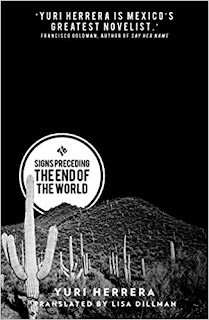 We were very excited to see Signs Preceding the End of the World (pb, 978-1908276421, £8.99) by Yuri Herrera included in the recent Guardian feature The 100 Best Books of the 21st Century, you can see that here.  They wrote “Makina sets off from her village in Mexico with a package from a local gangster and a message for her brother, who has been gone for three years. The story of her crossing to the US examines the blurring of boundaries, the commingling of languages and the blending of identities that complicate the idea of an eventual return." 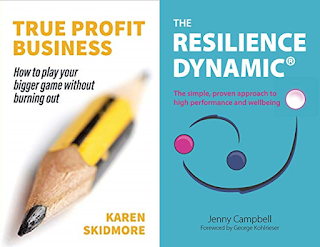 This week sees the publication of True Profit Business by Karen Skidmore (£14.99, pb, 978 1788600842) and The Resilience Dynamic® (£15.99, pb, 978-1788601085) by Jenny Campbell from Practical Inspiration, with guest posts and reviews lined up for both. Skidmore’s mission is to give every small business owner a plan and a process to grow their business, without burning out along the way. The Resilience Dynamic® illustrates, with practical tools, how to develop resilience as a buffer to stress and how it can transform how you lead change and increase performance in a complex and uncertain world. 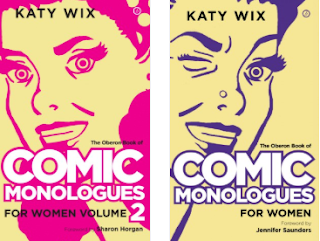 Who loves Taskmaster? Me, me, me and here are the top ten funniest moments. One of the current series contestants is Katy Wix who is doing pretty well!  But did you know that she has two books published by Oberon? No, I thought not. The Oberon Book of Comic Monologues (£9.99, pb, 978 1849434287) and The Oberon Book of Comic Monologues for Women Volume 2 (£9.99, pb, 978 1783199235) are collections of hilarious and original audition speeches which fill a significant gap in the market, as although are many monologue collections out there, very few provide good material for comedy. The brevity in length (each is two or three minutes) makes these ideal for auditions or showcases and the variety in age and style encompasses different comedic approaches; from the very quirky to the more traditional. Katy Wix’s profile is definitely on the rise, and I think these would sell well if displayed.

And fifty years after the release of Abbey Road, here's  a brand-new remix of Here Comes the Sun, which has notched up more than a million views in less than 24 hours. I think this is just what we all need to see in these contentious times!
That’s all folks, more next week!