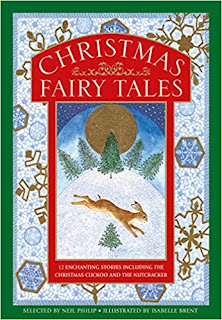 Halloween done and dusted, so we all know what come next, and I will draw your attention to this new title from Armadillo. Christmas Fairy Tales (hb, £10, 978 1861478740) is a collection of twelve traditional fairytales in very readable retellings by folklore expert Neil Philip (with introductory notes for the interested). Some, such as The Nutcracker are well known, others such as the joyous Schnitzle Schotzle and Schnootzle less so; but all offer glorious views of the true meaning of Christmas. It is exquisitely illustrated by Isabelle Brent with gold leaf trims to all the pictures, and the pages are beautifully designed with intricate borders and lots of lovely festive details; you can have a look here. Finished copies have just come in looking absolutely gorgeous and I would highly recommend it! Of course, there are plenty of Christmas anthologies around but this one really is something special and it’s just £10! 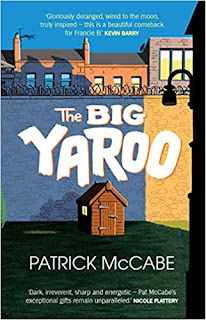 A brilliant article in the Observer last weekend about Patrick McCabe, which talks a lot about his new book The Big Yaroo (£12.99, pb, 978 1848407411) which is published by New Island Books this month. Here's another piece on New Statseman.com by the same writer (Megan Nolan, also an Irish author who’s just signed a big book deal, and is quite in vogue right now) explaining exactly why this sequel is something to be thrilled about and why The Butcher Boy, published in 1992, was such a turning point for Irish literature. The Big Yaroo is a roller-coaster of a read, it’s uproariously funny, terrifying and profound. As Nolan says, it reminds you of ‘the joy of McCabe’s sentences, and … how dangerous and thrilling Irish writing can be.’ Nicole Flattery called it ‘dark, irreverent, sharp and energetic—Pat McCabe’s exceptional gifts remain unparalleled’ and I’m sure there will be more rave reviews to come. 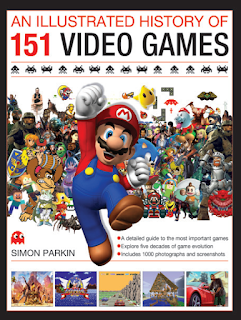 Author Simon Parkin is on a bit of a roll at present, he’s got a non-fiction title A Game of Birds and Wolves out from Sceptre this month, which is currently being turned into a film by Steven Spielberg's production company! He’s also a regular contributor to the Guardian's Long Read, a contributing writer for the New Yorker, and the game critic for the Observer. A good time therefore to flag up a new edition of his blockbusting Lorenz title, An Illustrated History of 151 Video Games (978 0754823902, £14.99, hb) which has just been published in a new and updated edition. Beginning in the early 1970s, the book charts five decades of the game evolution. The story of each game is wittily described with loads of great trivia and quotations, and fully illustrated with over 1,000 photographs, screenshots and artwork. This celebratory reference and history by the man whom the New Statesman called ‘one of the most effortlessly masterful voices in video game writing’ will enthral any video games aficionado whether they are playing as a supersonic hedgehog, athletic archaeologist or moustachioed Italian plumber! 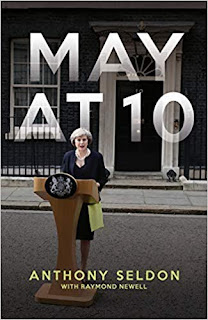 A major serialisation of May at 10 (£25, hb, 978 1785905179) by Downing Street's official historian Anthony Seldon began this week in the Times, you can see part one and two here and there were two more big extracts also. Written by one of Britain's leading political and social commentators, May at 10 describes how Theresa arrived in 10 Downing Street in with the clearest, yet toughest, agenda of any Prime Minister since the Second World War: delivering Brexit. What follows defies belief or historical precedent. Including a comprehensive series of interviews with May's closest aides and allies, and with unparalleled access to the advisers who shaped her premiership, Seldon decodes the enigma of the Prime Minister's tenure. Here’s a review in the Guardian entitled ‘Theresa May inflexible, introverted and surly, biography claims’ and also one in the Times saying ‘Readers of his 640-page account of May’s neuralgic time at the top may feel less indulgent to this brine-washed limpet of a prime minister, as incurious and foggy a figure as ever led this country.’ 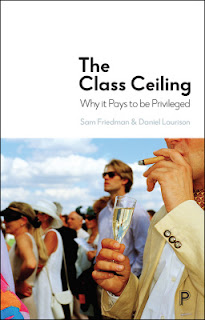 Lots of chat on social media this week about Labour’s crusade against ‘the elite’ with questions about who exactly ‘the elite’ are and whether they are necessarily bad! Plenty of reference was made to BBC Two's recent How to Break into the Elite documentary (available on the iPlayer here ) where Amol Rajan looked at how much class matters in Britain's top professions. It featured Daniel Laurison and Sam Friedman, authors of The Class Ceiling. Sam was described by Amol as ‘the Don when it come to the link between class and top jobs’ and discussing his research into social mobility, he reveals stats that are both shocking and depressing. The Class Ceiling: Why it Pays to be Privileged (978 1447336105, £9.99, pb) is published by Policy Press and the paperback of is coming inJanuary. 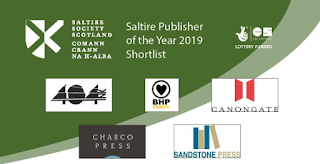 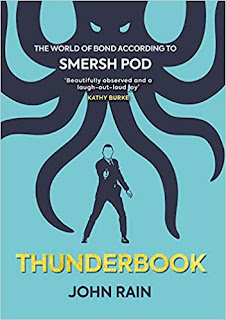 Congrats to the wonderful City Books in Hove who won last week’s giveaway, a copy of Thunderbook: The World of Bond According to Smersh Pod (hb, £16.99, 978 0957507623) is now on its way to you! The Bond films have entertained annoyed, excited, bored, aroused and invigorated cinemagoers for more than fifty years. Who hasn't wanted to kick a big bloke with metal teeth in the groin? Fly a small plane out of a pretend horse's bottom? Or push a middle-aged man into space? No one, that's who. Thunderbook affectionately examines Bond with tongue firmly in cheek and elbow dug in ribs. Join John Rain as he goes film-by-film pointing out all the good, the bad, and the double-taking pigeons contained within Bond's half-century of world domination. It’s out from Polaris on 7 November.

And if you want to text yourself on your Bond knowledge – then why not try this quiz from the 007.com website! 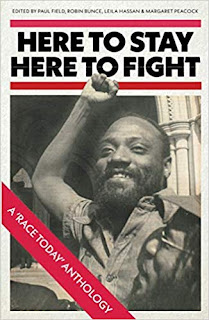 Here to Stay, Here to Fight: A Race Today Anthology (£17.99, pb, 978 0745339757) which has just been published by Pluto was extracted in Ceasefire magazine, you can read that one here and there’s a brilliant interview which you can watch on YouTube here with one of its authors Leila Howe talking about the book and also discussing racist and sexist abuse against Dianne Abbott, FBI infiltration of Black Panther-inspired groups, the knife crime epidemic in London and the difference between the activism of the previous generations and the activism today. Fascinating stuff. Here to Stay, Here to Fight, is the first book-length anthology of its kind, providing an overview of Race Today's 15-year history, as well as exploring its impressive legacy in contemporary social movements. 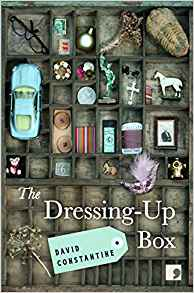 A brilliant review for David Constantine's collection The Dressing-Up Box (hb, £14.99, 978 1912697212) in the Guardian this week here calling it an ‘intelligent, unshowy and often moving collection.’ David also wrote a piece for Big Issue North this week, about his work with the homeless in the 1960s, and how it inspired him to tell the truth about people through his stories. The characters in The Dressing Up Box are all in pursuit of sanctuary; the violence and mendacity of the outside world presses in from all sides be it the ritualised brutality suffered by children at a Catholic orphanage, or the harrowing videos shared among refugees of an atrocity 'back home'. In each case, the characters withdraw into themselves, sometimes abandoning language altogether, until something breaks and they can retreat no further. In Constantine's luminous prose, these stories capture such moments in all their clarity. It was published by Comma in September. 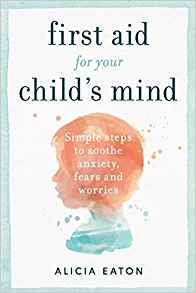 Lots of PR for First Aid for Your Child’s Mind (£12.99, pb, 978 1788601177). There will be a feature in Families Nationwide magazine, Jan/Feb 20, a review in Families SE, Jan/Feb 20, a double page interview in The Weekly News, a 500 word feature in Toddle About entitled  'Practical Techniques and Words to Manage Children's Worries', and a feature in the Spring 2020 issue of Country Child magazine. Alicia Eaton is a Harley Street practitioner with over fifteen years’ experience of helping children to feel more confident and as Elaine Halligan (Director of The Parent Practice) says, ‘This book will come as a huge relief to so many parents by helping them understand that much anxiety is actually part of everyday childhood worries and doesn’t need to be catastrophised.’ 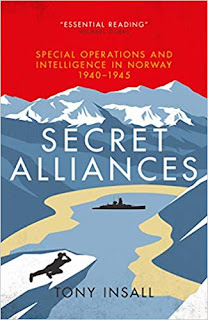 A great piece about Secret Alliances: Special Operations and Intelligence in Norway 1940-1945 (978 1785904776, £25, hb) in the Times this week. Secret Alliances is published by Biteback next week, and is an extraordinary book in which historian Tony Insall reveals how some of the most striking achievements of the Norwegian resistance were the detailed reports produced by intelligence agents living in the dangerous conditions of the country's desolate wilderness. Offering dramatic details on operations such as the Nazis plans to build an atomic bomb and the sinking of the Tirpitz in November 1944, Secret Alliances is an authoritative new perspective on some of the most remarkable exploits of the Second World War. 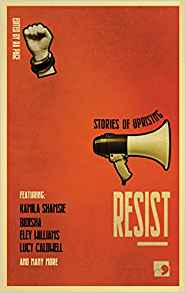 You can read an excerpt from Resist (£14.99, hb, 978 1912697076) from Comma’s collection of British protest history inspired stories, on the Minor Literatures website here. The Done Thing by Luan Goldie is based on the Ford Dagenham Women's Strike of 1968. At a time that feels unprecedented in British politics, with unlawful prorogations of parliament, casual race-baiting by senior politicians, and a climate crisis that continues to be ignored it's easy to think these are uncharted waters for us, as a democracy. But Britain has seen political crises and far-right extremism before, just as it has witnessed regressive, heavy-handed governments. Eventually, people have called it out, stood up, resisted and in this new collection spanning two millennia of British protest, authors, historians and activists re-imagine twenty acts of defiance. 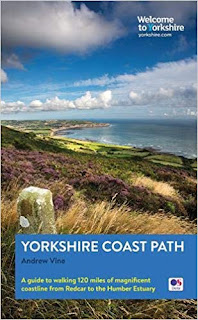 A full spread feature for Yorkshire Coast Path by Andrew Vine (pb, £14.99, 978 0993291180) in the November issue of Yorkshire Life, which has a circulation of 12,000. You can see the online version here and admire some of the gorgeous pics from this terrific book! This definitive walking guide maps the whole route on large-scale OS maps and is packed with colour photos, making it an essential purchase for the long-distance walker and afternoon stroller alike. It’s published by Safe Haven. 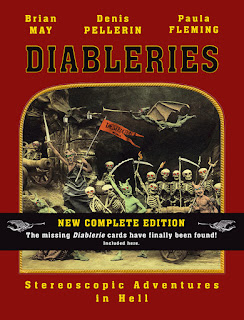 Super piece in the Guardian here about how Brian May found the two missing cards needed to complete the new edition of Diableries: Stereoscopic Adventures in Hell (£60, hb, 978 1999667436). which has just been published by London Stereoscopic. The tale of how for nearly 30 years, May has attempted to collect all 182 of the 19th-century French stereoscopic photography cards featuring scenes such as The Infernal Cavalry, Satan the Journalist and Bicycle Race in Hell is a fascinating one.

Now that Halloween is over and the ghouls and ghosties are back in their coffins, I enjoyed this deliciously scary read in the Guardian about which books frighten the bejezus out of horror authors! 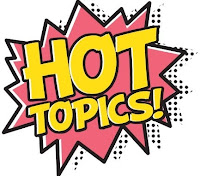 And in this week’s Hot Topics, here's James Corden talking to Kanye West in a special ‘Airpool Karaoke’, here's the BBC on the correct etiquette for asking for a celeb selfie, (as Dame Emma Thompson is said to have been horrified to learn a waiter lost his job for asking for one with her) and here's a trailer for series three of The Crown which is starting on 17 November – I can’t wait! That’s all folks, more next week!