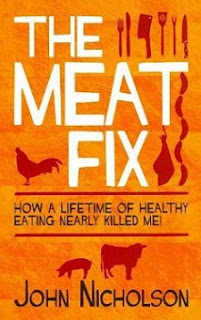 Hurrah hurrah, Christmas is on its way – and with it that chance to podge up on all the delicious seasonal scoff - turkey, sausages, pork pies – if you’re lucky maybe even a venison casserole and a roast partridge or two! Naturally the Christmas food police will tell us that this massive annual increase in our meat and saturated fat consumption is extremely bad for us – but is it really? For twenty-six years John Nicholson was a vegetarian, following a seriously healthy diet that included no cholesterol or animal fats but plenty of brown rice and lentils. However, for twenty-six years John Nicholson was ill – tormented year after year by apparently untreatable IBS. He was eating the healthiest diet known to mankind yet his digestive system was breaking down. His illness was affecting his life so badly that eventually he and his partner considered doing the unthinkable – eating meat. The results were spectacular. Twenty four hours after eating meat, he was better. After forty eight hours he was totally well. All his symptoms had gone – the IBS, the headaches, the mid afternoon tiredness, achy knees – the lot. Even his eyesight improved to the point he no longer needed to use reading glasses. Twelve months on, he feels like a new person. The Meat Fix: How a Lifetime of Healthy Eating Nearly Killed Me is the story of how eating meat again after twenty-six vegetarian years changed John Nicholson’s life powerfully for the better, and of his quest to understand why the supposedly healthy diet he had existed on was actually damaging him. This is a fascinating, surprising, often hilarious and shocking journey of discovery.
Order the Meat Fix here 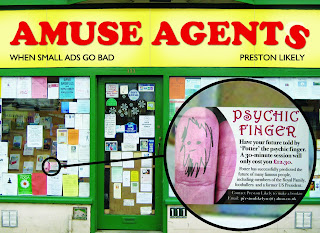 Amuse Agents by Likely is getting some cracking publicity – and is the perfect stocking filler Christmas present – so make sure you have plenty on display for those impulse purchases! This book is an amusing compilation of extremely daft spoof small ads that put up in shop windows over a space of two years.  Normally these little cards advertise everything from second-hand cars to baby-sitters, cleaners, kittens and rabbits. But the ones created by 46-year-old Likely were designed for a laugh and to see whether anyone would reply in similar humorous vein… There was a massive full page piece about it in the Mail this week, which gives you a good flavour – you can see it here – and the reviews online are very favourable – for example; “Such a funny book, I left this book on my dining room table for people to browse and within seconds readers were laughing, it is one of those books you can browse through as it gives you instant belly laughs, and in times like these, a laugh is just what Preston prescribes. One of my favourite adverts is the Pickpocketing Course.”  This article has now been reproduced online by The Lady and The Mirror (now there’s a diverse readership) – so lots more people will be finding out about the book – and looking for it!
Order Amuse Agents here 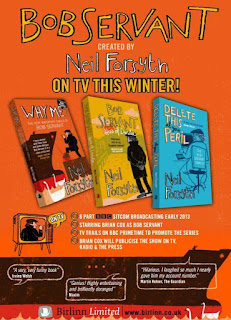 Now, who’s a fan of Bob Servant – the hilarious fictional Dundonian businessman? This comic character was created by Neil Forsyth and is the star of three collections of email exchanges between "Bob Servant", the fictional author, and internet spammers. The first title was originally published in the in 2007 and is characterised by Servant's increasingly surreal contributions and growing frustration on the part of the spammers. On publication the character of Bob Servant was compared to that of John Shuttleworth and a number of reviewers drew comparison to Henry Root. Irvine Welsh selected this  title, the then little-known Delete This At Your Peril as his choice in an Esquire Magazine poll for The Funniest Books Ever and along with support from a number of bands including Snow Patrol and Belle and Sebastian, created a word of mouth campaign that attracted the attention of the BBC who serialised the books on Radio 4. Now in January 2013 comes a new BBC4 TV series. – you can watch a clip from it here. The series will run for six weeks – plenty of time to build up a mega fan base for the three hilarious books on which the series is based. The trilogy of books by Neil Forsyth comprises: Delete This At Your Peril, Bob Servant: Hero of Dundee and Why Me? The Very Important Emails of Bob Servant. The series starts Brian Cox, and there is going to be lots of publicity for it. Brian will be on be on Lorraine Kelly, The One Show and lots of other chat shows and the author Neil Forsyth is writing tie in pieces for newspapers including the Guardian and Scotsman where he’ll give plenty of mention to the books. They are all being reissued with new covers to tie in with the TV series in January.
Order the Bob Servant Emails here! 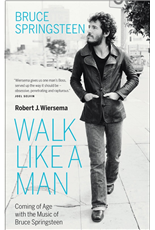 As he enters his sixties, Bruce Springsteen remains a paragon of all that is cool and right. He’s a genuine voice of the people, an elder statesman who has inspired generations of bands. There are dozens of books about the Boss, so what’s left to say? Nothing objective, perhaps. But when it comes to music, objectivity is highly overrated. Walk Like a Man: Coming of Age with the Music of Bruce Springsteen is a frank and funny blend of biography, music appreciation and memoir. Novelist Robert Wiersema grew up with Springsteen’s songs, and this book tells the story of a man becoming a man (despite getting a little lost along the way), and of the man and the music that have accompanied him on his journey. It is essential reading for all fans of Bruce Springsteen, and it’s coming in January.
Order it here

And here's the Boss himself at his brilliant best! 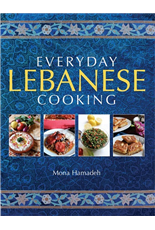 Who watched that episode of the Junior Apprentice a couple of weeks ago where the contestants had to come up with a cookery book for a niche market. I don’t think their plans for of a student cookbook entitled #Where’s Mummy? or a cookbook for professional women entitled er, Professional Woman – are exactly going to set the world on fire – although they did come up with some clever marketing ideas and graphics. But where they really fell down was on the proof reading – with some real shockers of spelling and grammar. See guys, this publishing game isn’t as easy as everyone thinks! Of course what they should have come up with is something like Everyday Lebanese Cooking, which is published by How To Books in January. Lebanese food is definitely having a bit of a moment at present – there are more and more Lebanese restaurants appearing on our high streets and there is a growing interest in the fresh tastes offered by this delicious cuisine.   As well as having the reputation of being amongst the healthiest in the world; Lebanese food is the deal food for the current economic climate because it is very economical to make.  Mona Hamadeh has been cooking Lebanese food for friends and family for over 50 years and this book is a response to being constantly asked to share her recipes.  This book includes a wide variety of dishes from Lebanese cuisine, including the well known and delicious hummus, baba ghanouj and tabouleh as well as many other maza (starters), chicken and fish main dishes and of course the scrummy middle eastern pastries. Find out more and order it here

And here's an amusing introduction to this year's Junior Apprentice candidates!

This blog goes weekly to over 550 booksellers. If you would like to order any of the titles mentioned, then please click here to go to the Compass New Titles Website.

That’s all for now folks, more next week!
Posted by Compass Rose at Friday, November 30, 2012