The desire to improve ourselves,  lose weight, shape up and just have better lives never seem to go away – and every month Hay House publishes inspiring new titles on these topics. They always get a lot of publicity, as they are the type of subjects that women’s magazines, radio stations and tabloid newspapers love! For example, Janet Thompson, author of Think More Eat Less was on Steve Wright (BBC Radio 2) this week talking about her book. And Mindless Eating: Why We Eat More Than We Think by Brian Wansink is featured in the March issue of Weight Watchers magazine. And how about this new title published In April – Hot, Healthy, Happy: The 21-Day Diet to Eat, Drink and Think Your Way to Self-Love and Skinny Jeans by Christy Fergusson PhD which will be featured in the March issues of Woman, Top Santé and Women’s Health magazines. Would you like to feel great in a bikini, get glowing skin, and spring out of bed full of energy every day? Oooh yes please. Well this title promises that you can wake up each day with enough energy to follow your dreams; have flawless skin and nails to die for; connect to and trust your own inner wisdom and feel happy and confident despite facing drama on the twittersphere? Sound pretty good to me! Order Hot Healthy and Happy here (April)

And how about something that will help you to understand your emotional weight and shed your pounds of pain?  What are we really hungry for when we turn to food? Hungry by bestselling author Dr Robin L. Smith isn't about the hunger for food, but the craving to reclaim and embrace our true identity. It's not about making a plan or signing up for a program to change our lives or relationships. It is about signing up to be a witness to our own lives and journeys. Hungry helps us get back in touch with our wants and needs and encourages us to approach them, with compassion, tenderness, and hope. Dr Robin shows us that what we're really hungry for is self-acceptance, love, appreciation and the confidence and freedom to embrace the lives we want in order to make our dreams a reality. Being real, being yourself full time, is what creates a rich, meaningful, and fulfilling life. Wow! Who knew? Get me a copy right now – it’s out in April and you can order it here.

Remember you can always tune into www.hayhouseradio.com to listen to many of the Hay House authors talking about their books – and find out about forthcoming mind body spirit events and publicity.

Right, that’s quite enough self improvement. Give me a cup of tea … a beverage brewed from the fermented dried leaves of the shrub Camellia sinensis and imbibed  by all the great civilisations in the galaxy’s history; a source of refreshment, stimulation and, above all  else, of moral fibre – without which the British Space Empire must surely crumble to leave Earth at the  mercy of its enemies. Sixty per cent of the Empire’s tea is grown on one world – Urn, principal planet of the Didcot system. If Earth is to keep fighting, the tea must flow! But when a crazed cult leader overthrows the government of Urn, Isambard Smith and his crew find themselves saddled with new allies: a legion of tea-obsessed nomads, an overly civilised alien horde and a commando unit so elite that it only has five members. Only together can they defeat the self-proclaimed God Emperor of Didcot and confront the true power behind the coup:  the sinister legions of the Ghast Empire and Smith’s old enemy, Commander 462.

Blimey, what on earth am I going on about – who’s still with me or did I lose you at Urn? Well, those of you who are good at spotting a cult classic about to go properly mainstream will recognise the plot of one of the three instalments in The Chronicles of Isambard Smith by Toby Frost.  Smith and his erudite alien sidkick, Suruk the Slayer are enjoying cult celebrity status among a growing and dedicated army of readers. As you might have deduced, these books have a strong appeal to those whose taste in humour runs through Python, Hitch Hiker’s Guide, Blackadder, and Red Dwarf.  The three titles in the series so far:  Space Captain Smith, God Emperor of Didcot and Wrath of the Lemming Men – are being rereleased in April, with updated covers, and lots of publicity. This is in advance of the publication of the long awaited fourth book in the series A Game of Battleships, which is coming in August.  This series has all the hallmarks of something that could become seriously BIG – so order the copies and help to start building up the buzz now – then you can claim to have been in on it from the start!

You can find out more on the website spacecaptainsmith.com and order all three titles (published by Myrmidon) below.
Order Space Captain Smith
Order God Emperor of Didcot
Order Wrath of the Lemming Men

And you can watch a rather overly keen fan on YouTube talking about the books below! 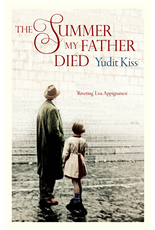 The annual Jewish Book Week Festival begins at the end of this month – this is an event which always attracts a lot of media attention. (You can find out more about Jewish Book week 2013 here) As part of the build up to this, The Times Literary Supplement will be reviewing The Summer My Father Died by Yudit Kiss this weekend and the author is over in the country for her event at Jewish Book Week on the 28th February.  Yudit Kiss grew up a communist in , soaking up her father’s ideology unquestioningly. As a child she is puzzled when others refer to her as Jewish; she only knows that her family doesn’t believe in God.  How can they? As her father lies dying, Yudit tries to understand the enigma surrounding his life. Where does his unshakeable communist conviction come from?  Why doesn’t he have relatives? As she digs deeper into his tragic history, Yudit is forced to confront the contradictions and lies woven into the life of her family – and her country – through the dramatic twists of twentieth century . Lyrical and poetic The Summer My Father Died is a powerful memoir. It is similar to Remind Me Who I Am, Again by Linda Grant and is a wonderful book that deserves more attention.  Lisa Appignanesi said of it “In this remarkable memoir, Yudit Kiss uncovers the paternal history that shaped her own, even while she was unaware of it … the journey is riveting.” while István Szabó (director of Mephisto and Being Julia) said “It shook me profoundly … not only the richness of the relationship between father and daughter, but the internal development of the narrator also had a deep impact on me.” Find out more and order it here 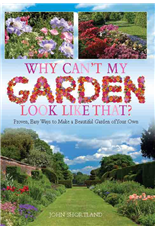 Wow – the weather suddenly seems to have taken a turn for the better – well at least it has down in for us sissy southerners – it’s positively balmy today! Time to get out and about – but how many times when we are visiting gardens do we then look at our own garden with mixed feelings of disappointment and despair, and exclaim “Why can’t my garden look like that?”  The simple answer is “it can”. John Shortland has lots of easy ways to make a beautiful garden of your own, demonstrating just how easy it is to make adjustments to what is already there to make your garden stunning, whatever its size.  Written in an informal, easy-to-read style, Why Can’t My Garden Look Like That? enables every reader to have a garden they can be proud of.  The author looks at every aspect of transforming what you’ve got, including: sorting out what you are trying to achieve, the best use of time a busy person can make in their garden, improving the layout of your garden, maintaining visual interest throughout the year and using plant combinations, colour and foliage for maximum impact. It’s full colour throughout, it’s paperback, it’s clear and jargon free and it’s out in April.
Order it here. 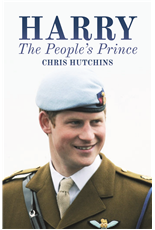 Yes, OK, fair enough, not everyone is interested in gardening – not everyone even has a garden. “Please give us something that we can all sell” I hear you cry – something that appeals to everyone, young and old, rich or poor, from Oban to . Well how about Prince Harry? After all he is The People’s Prince, or at least so this new title by Chris Hutchins claims! This is the story of Prince Henry, third in line to the British throne. From a childhood born to a troubled marriage and scarred by the tragedy of the death of his mother, Diana, Princess of Wales, to his brilliant public performances at the Diamond Jubilee,  the London Olympics and his brother the Prince of Wales’s  wedding; this book charts the remarkable journey of a  seemingly ordinary young man with an extraordinary destiny.  Once pilloried as a playboy prince who drank £200 cocktails with louche friends in nightclubs, brawled with photographers and wore a Nazi uniform to a fancy-dress party; then lauded following his first term of duty on the front line in southern Helmand in , from which he returned a hero.  Written with the help of a wide range of people – from senior aides to humble members of staff, from aristocrats to bodyguards and protection officers, from friends of Harry’s to  the not-so-friendly, from girls he has  loved and lost to soldiers who have served alongside him on  the front line in Afghanistan – Harry: The People’s Prince is  the story of a young man who has created a life  for himself in contrast to the one set out for him by what he  describes as ‘an accident of birth’. I hardly need to tell you that this book will get absolutely tons of publicity – the royal family are rarely off the front pages these days – so order your copies here!

But if you’d prefer a rather less complimentary “view” of Harry, click below to remind yourself of how he looked partying naked in Las Vegas!

That’s all for now folks, more next week!
Posted by Compass Rose at Friday, February 15, 2013