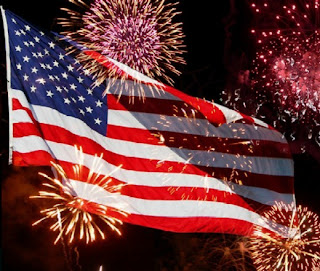 Yesterday was July 4th, a big day of celebrations for all in – and appropriately enough, this week I have a very exciting announcement to make: Compass has formed a new partnership with the massive distributor Ingram. This means that you, the independent bookseller will now be able to order titles – and have them delivered to your bookshop within 3-5 days! There is no minimum order – you can just order one title, and we really believe that this will give you a chance to compete effectively with Amazon – the shipping costs are very competitive indeed! By opening an account with Ingram you get great terms; 40% discount and over 12 million US titles are available to order! You will be ordering using the Ingram ipage website – widely regarded throughout the industry as one of the best and easiest to use ecommerce sites in the world. Julian Ryle, Supply Manager for Blackwell’s said of it: “ipage is invaluable when ordering US books – the ease of accessing catalogue and stock detail all from one place is second to none.” I’ll give you more details about how you can open your Ingram account next week – and show you exactly how you can get your hands on all of those juicy US books – but I will tell you now; it’s extremely simple, you can do it with a few clicks online, and then you can use it as little or as much as you need – in fact really there’s no reason not to have an Ingram account for your bookshop! 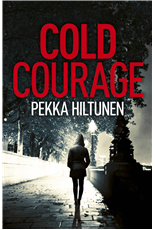 Moving north from to , Cold Courage by Pekka Hiltunen was officially published this week! This gripping psychological thriller from Hesperus set in London presents us with a whole new slant on the Scandi crime genre, and reviewers are already saying things like “Rich in details, sure in its descriptions and smoothly written, this novel is a stylish debut.”  If you haven’t read it yet then the plot begins with a young woman who has been gruesomely killed, her body abandoned in a car boot in the middle of as a warning to others. The police have no leads and no clue as to the identity of the victim.It seems that Lia is the only one who refuses to let the murderer go unpunished. A chance encounter with the mysterious Mari gives Lia fresh hope. But just who is she? Can Lia trust her? Can Lia afford not to trust her? There is a really good trailer on YouTube which you can watch: here and also a short author video where Pekka talks about the ideas behind the novel here on YouTube . We have 50 or so signed copies of the book in the office which would be perfect for any independents that have active social media pages; blogs etc. and want to really give this book a push. If you’d like one then email Pat@compass-dsa.co.uk Cold Courage is a great read with a wonderfully strong female protagonist and you can  order it and find out more here 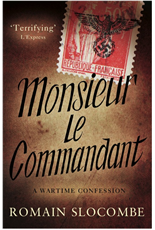 This seems to be a very international Compass Points this week – so let’s continue in the same vein. You can click here to see author Romain Slocombe explain the inspiration behind his novel, Monsieur le Commandant which is coming from Gallic Books, in September and is  a harrowing tale of wartime collaboration within the French literary establishment. It has had sales of over 40,000 copies in and was long listed for the Prix Goncourt 2011. French reviewers described it as “Probably one of the most significant novels of the year” and ”in a unique way, a powerful piece of Resistance literature.” The book begins in 1942, when French Academician and Nazi sympathiser Paul-Jean Husson writes a letter to his local SS Officer. Tormented by an illicit passion for Ilse, his German daughter-in-law, Husson has taken a decision that will devastate several lives, including his own. The letter is intended to explain his actions. It is a shocking story that begins in the years leading up to the war, when following the accidental drowning of his daughter, Husson’s previously gilded life begins to unravel. Through Husson’s confession, Romain Slocombe gives the reader a startling picture of a man’s journey: from pillar of the French establishment and World War I hero, to outspoken supporter of Nazi ideology and the government.
Find out more and order Monsieur le Commandant here

And now leaving , our next title takes us off on a year long voyage across the Pacific! Love with a Chance of Drowning: A Memoir by Torre DeRoche (published by Summersdale) was serialised in You Magazine in the Mail this weekend – and since then has become their number one bestseller in their online shop! Don’t let them get all the sales – the Mail on Sunday has gazillions of readers, and this is the ideal summer read. You can read the whole article in You Magazine here – there are lots of fab photos which really bring the adventures in the book come to life! Set against a backdrop of the world’s most beautiful and remote destinations, Love with a Chance of Drowning is a sometimes hilarious, often moving and always breathtakingly brave memoir that proves there are some risks worth taking.
Order Love with a Chance of Drowing here

A big thank you to all you booksellers – we can announce this week that The Hundred-Year-Old-Man Who Climbed Out of the Window and Disappeared has officially sold over one million copies in the ! To mark this occasion Hesperus has organized a competition which will run on The Independent online, for the whole of July. To look at the competition click here.  This comes with tube advertising, which is visible in 50 stations across - again for the whole of July promoting the book. All great publicity for this title – and maybe some of you would like to enter! The competition is for entrants only and prize is a three night holiday to for two people, the runner-up prize is one of five bottle of Karlsson’s Gold Vodka (an apt homage to Alan Karlsson)!

Don’t forget we have two forthcoming September titles available as bound proofs – which you can order if you want some reading for your summer holidays to help you get ready to sell these two cracking titles. The Visitor is the debut novel from exciting new talent Katherine Stansfield and is a novel steeped in the coast and people of which shivers and flashes with visions as elusive as the fish at the centre of its story. It’s intelligent women’s fiction which will appeal to readers of Helen Dunmore and Hilary Mantel, Sarah Hall, and Kate Morton and it’s from Parthian. The Best Book in the World is a wonderfully quirky and hilarious novel which is already a big bestseller in – and is published in the by Hesperus. It’s by Peter Stjernström, and has been described as “Spot on satire” and “Insanely funny and easy to read”. If you’d like a bound proof of either of these titles then please send your details to pat@compass-dsa.co.uk and we’ll send you one!

Finally; are there any booksellers called Tyler or Charmaine out there?? If so you will probably be very offended when you watch this crazy rant from the truly appalling Katie Hopkins on This Morning this week where she decides that certain names belong to those people she’d like to avoid at all costs!