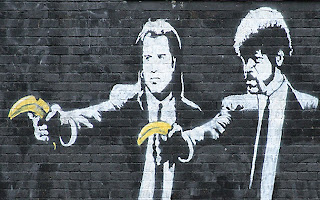 artist Banksy has been much in the news this week, with the revelation that a stall in 's was selling original signed canvasses by Banksy for just $60 (£38) each. Many of the pieces, estimated to be worth up to £20,000 each, remained unsold at the end of the day. The elusive artist then posted a video on his website accompanied with the words, "Yesterday I set up a stall in the park selling 100% authentic original signed Banksy canvases. For $60 each." So does this mean that no one actually values the work very much – unless they know it’s by Banksy? You can read the whole article on the BBC website here.

This is all excellent ammunition to help you sell lots of copies of the amusing spoof £9.99 hardback from Summersdale: Wansky: Interpreting a Graffiti Virtuoso. This colour gift book has just been published and is by Marc Blakewill and James Harris who have been a writing partnership for over twelve years, writing for many popular TV and radio comedy shows such as Horrible Histories, Russell Howard’s Good News and The Weakest Link. Wansky combines somewhat juvenile images with high-brow art criticism and will appeal to a wide-ranging audience. Find out why Wanksy is the unheralded genius behind some of the most iconic urban images of our time: the seminal ‘cock and balls’, the timeless ‘Leroy loves Sarah’, the devastating brevity of ‘sod’ and countless other masterpieces. You’ll never look at a crudely drawn penis in the same way again! There will be publicity this week for Wanksy in Time Out and also Zoo magazine. 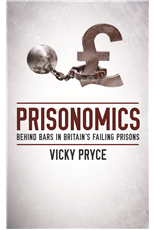 Plenty of media coverage this week for Prisonomics: Behind Bars in Britain’s Failing Prisons by Vicky Pryce this week – cross letters to the Telegraph saying “who says crime doesn’t pay” and so on – all good stuff to help you sell this book! Vicky Pryce appeared on the Today Programme on Radio 4 and on BBC Breakfast and was on Channel 4 News on Monday evening on and also the ITN News at Ten. The second part of her serialisation in the Mail which you can read here also appeared this week and there will be interviews with her in the Times on October 19th and the Guardian on Monday 21st October. Prisonomics has just been published in hardback by Biteback and is a compelling analysis of the cost to the economy, as well as the human cost, of keeping women in prison. Vicky Price uses her own very challenging experiences and the diary she kept in prison to look at how prison works, and should work, from an economist’s perspective. She has strong views on how the prison system works, especially with regard to how it treats women and this book is a genuinely interesting read. Her previous book, Greekonomics, was highly acclaimed and sold 3,000 copies.
Order Prisonomics here 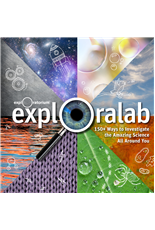 Now, Compass Points doesn’t usually bring you children’s books – but here’s a really terrific title coming from Emex in November. Exploralab: 150+ Ways to Investigate the Amazing Science All Around You is a great book that teaches young readers all about the mind blowing science that right there if they just knew where to look! Exploralab begins the way every day does: with the instant we open our eyes. Readers then embark on a journey through a typical day in the life of most children, engaging many scientific principles along the way. There are tons of activities that explore the forces at work around us – the wavelengths of sunlight that hit our eyelids, or the sound of the alarm clock that so rudely wakes us up. But that’s not all  – most of the book’s “laboratories” contain special gizmos - such as mirrored inserts, spinning discs and polarized filters – that help readers play with optics, physics, chemistry, earth science, astronomy, social behaviour and more. And a removable magnifying glass on the cover empowers kids with a tool of discovery that they can use inside the book and out. Popular science is a subject on a real roll at the moment – and this is the ideal Christmas present for parents wanting to give children something educational – but also a bit zany and fun! It’s a £16.99 hardback with over 500 colour photos and there is an absolutely cracking promotional video for the book on YouTube which you can see below  that does the job of explaining what the book is all about brilliantly, so I urge you to have a look at it! And you can order Exploralab here. 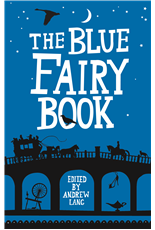 While we’re on the subject of children’s books, take a look at these two lovely titles from brand new Hesperus children’s imprint, Hesperus Minor - bringing forgotten children’s classics back into print for new generations to discover and older generations to revisit. The Blue Fairy Book and The Red Fairy Book are gorgeous and bewitching collections of fairy tales, edited by Andrew Lang. Lang (1844–1912) was a Scottish novelist, journalist, poet and literary critic who collected stories from communities and traditions all over the world for his fairy books: from the Arabian Nights, China and the Brothers Grimm. Many of the tales were translated into English for the first time for these anthologies, from languages as diverse as Russian, Norse and Japanese. There were twelve coloured Fairy Books, originally published in the nineteenth century – and Hesperus Minor will be publishing them all – these first two are coming in November. 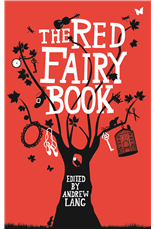 The covers are absolutely stunning, and these are beautiful and stylish classic editions. I adored the Andrew Lang Fairy books when I was a child – his retellings of both popular and more unusual tales capture the imagination and take you to enchanted, far-away lands where anything can happen. The Blue Fairy Book  includes Little Red Riding Hood, Aladdin, Puss in Boots and Rumpelstiltskin as well as little-known stories such as The Yellow Dwarf, The Bronze Ring and The Master-Maid. The Red Fairy Book includes Jack and the Beanstalk and Rapunzel as well as less popular tales such as The Twelve Dancing Princesses and The Marvellous Musician. These are hardbacks at £14.99 – absolutely ideal for the many parents and grandparents looking for Christmas presents. Andrew Lang’s fairy books helped to lay the foundation for our continuing fascination with fairy tales as entertainment and cultural objects, and each is a veritable treasure trove of stories. The books have the original black and white illustrations throughout.
Order the Blue Fairy Book here
Order the Red Fairy Book here

Many parents are looking to read their children the original fairy tales after years of relentless Disneyfication of the stories – however, by all accounts Tangled, the recent Disney retelling of Rapunzel was actually pretty good – and now seems to have attracted a bit of a teenage cult following! Watch the trailer below and see what you think – and then order those Andrew Lang titles! 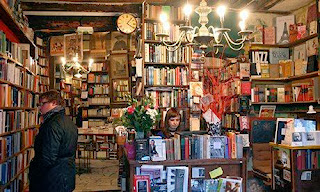 An interesting piece in the Guardian came to my attention this week, discussing what the French Government are doing to help independent booksellers – they’ve just passed a bill stopping the  online giants (no names mentioned!) from offering discounts along with free post and packing. Could the same idea work in the do we think?
Read the whole piece here. 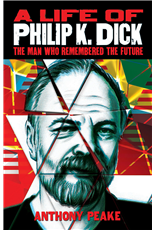 As knowledgeable booksellers, you will of course be familiar with the work of Philip K Dick – and also know how many major blockbusters are based on his work. He is probably not however, a household name despite the huge popularity of his ideas. A Life of Philip K Dick: The Man who Remembered the Future by Anthony Peake is a fascinating book written with the co-operation of numerous close acquaintances of Dick.  He was a writer who drew upon his own life to address the nature of drug abuse, paranoia, schizophrenia and transcendental experiences of all kinds and more than ten major movies are based on his work, including Blade Runner, A Scanner Darkly, Total Recall, Minority Report and The Adjustment Bureau. Dick lived through a hugely eventful period in American and world history from the upheavals of WW2 through the Cold War through to Flower Power and the ‘Summer of Love’ as well as the traumas of the Vietnam War and the Watergate Scandal. He was born in 1929 just before the Great Crash, his twin sister died when she was a month old and his parents were divorced by the time he was three. In his teens, he began to show the first signs of mental instability, but by then he was already producing fiction writing of a visionary nature. A Life of Philip K Dick is published by Arcturus (£9.99 with 8 pages of photographs) in November.
Order A Life of Philip K Dick here

And let’s remind ourselves of a couple of examples of the Philip K Dick genius – below is  the trailer for Blade Runner – the original short story on which it’s based was called Do Androids Dream of Electric Sheep? – which I personally think is a much funkier title!

And how about this trailer for Total Recall  which was based on We Can Remember it for You Wholesale – again – a cooler and cleverer title I feel, but maybe lacking that zing! 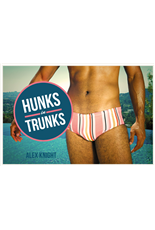 Looking for the ideal Christmas present for the hard to please women in your life? Well, I think Hunks in Trunks by Alex Knight should probably fit the bill nicely. This £7.99 paperback from Summersdale is the ideal gift for anybody who appreciates the male form, especially in a state of undress. It features retro photography and has a 60s feel, which gives it a certain degree of street cred and will tap in to the huge popularity of Instagram and vintage-chic. But basically it’s lots of full-colour photographs of hunks. In trunks. Big trunks, small trunks, trunks so teeny you can barely tell they’re there...
Order up some Hunks in Trunks here – ooooh yes please.

Never mind the trunks – what about what’s inside the trunks? Oooh er missus – and if you enjoy this type of remark then you will almost certainly share Compass Points’ hysterical amusement at this saucy spoof advert for deck sealant!

This blog is read weekly by over 600 booksellers, publishers and publicists. If you would like to order any of the titles mentioned, then please click here to go to the Compass New Titles Website or talk to your Compass Sales representative.
Posted by Compass Rose at Friday, October 18, 2013