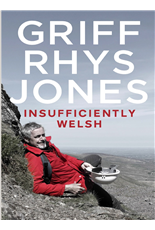 To kick off this week, we’ve just heard about a fantastic new series which will start on ITV on Monday 6 January at 8pm entitled A Great Welsh Adventure with Griff Rhys Jones. This is running over two months; in eight 30 minute episodes. ITV are expecting really good viewing figures of around 5 million for this series as Griff is such a popular presenter, and it is being aired at peak viewing time. I’m pleased too say that Parthian is publishing the accompanying full-colour hardback edition (9781909844698 £4.99) in January which features lots of lovely photographs from the series. In this informal guide to , Griff Rhys Jones rediscovers “the land of his aunties”. Born in but raised in Essex, he returns home on a mission to explore the real : the one beyond the tourist trail that exists in the deep beautiful countryside, full of hidden treasures and eccentric characters that make this country so unique. With help from a hidden hand, Griff is set a number of quests in eight distinct regions that not only test his knowledge of his homeland but his body too, as he climbs, abseils, rides and canoes his way through some truly breathtaking scenery. Griff’s journey takes him through Snowdonia, Anglesey, and the Gower; mid , Brecon, Pembrokeshire, north and Monmouthshire. Packed with all manner of weird, wonderful and enlightening facts, you’ll learn as much about as you do about Griff! And is he or isn’t he insufficiently Welsh?!
Order Insufficiently Welsh and find out more here

And here’s ten minutes of clips of Smith and Jones at their fabulously funny best! 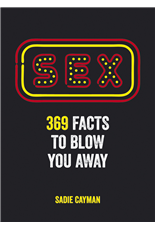 A big feature in the Sun this week for Sex: 369 Facts to Blow You Away by Sadie Cayman. Join her on a randy romp through the glorious world of sex, as we discover the longest orgasm on record, the world’s first penis museum, and why every man can travel as fast as Usain Bolt – well, his sperm, that is! This book is packed full of extraordinary and fascinating facts and would make a good present for a partner or fun-loving friend. Did you know for example that the most orgasms experienced by a woman in one hour is 134; the record for a man is 16. Thirty minutes of active sex burns approximately 200 calories and the proteins in sperm make a very effective anti-wrinkle treatment! This is a £5.99 hardback from Summersdale, which has just been published.

Some good publicity for three Carcanet titles in the Christmas book features. Her Birth (978 1 847772 38 1 pb) by Rebecca Goss will be included in the Daily Mail Christmas Round Up of Best Books.  The Greek Anthology, Book XVII (9781906188054) by Greg Delanty has been listed in Times Literary Supplement’s Books of the Year, selected by A.E. Stallings. “In these archly archaic ventriloquisms, Delanty’s wry wit comes through.” And finally, the Sunday Telegraph Supplement Seven Magazine featured Muriel Spark’s biography of Mary Shelley (978 1 847772 37 4 pb £12.95) “a brief but brilliant biography of Mary Shelley which has all the economy and ruthless insight of her novels.”

And if you need reminding of Mary Shelley’s most famous work, then it's time to have a look at Boris Karloff's finest hour!

The Totes Ridictionary by Balthazar Cohen will be featured in the Sunday Times Style magazine at the end of December – there will be a big two page spread on it and then they’ll run an image from it each week. There certainly has been a crazy amount of media nterest this year in words like “deets”, “jel”, “obvs” and  “twerk” – and The Totes Ridictionary is the ideal way to keep ridiculously up to date with the way language has changed during 2013 – in emails, tweets, Facebook posts, text messages, blogs and even real-life conversations. It’s a paperback from Plexus, with over 60 photos and illustrations (978 0 85965 511 8).

And if you’d rather have a visual definition of the word “twerk” – well then  take it away Miley  – or should I say put it away Miley. 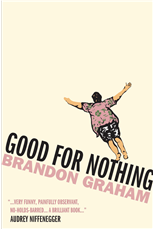 We mentioned that Andrew Marr was seem reading and enjoying Good for Nothing by Brandon Graham a couple of weeks ago – and the word of mouth buzz is definitely building for this title.  Audrey Niffenegger, the author of The Time Traveller’s Wife said “Brandon Graham is a very funny, painfully observant, no-holds-barred American writer. … This is a brilliant book. When times are really horrible it's good to be able to laugh (especially at ourselves).” This amazing debut novel, containing humour with a bite, covers a week when Flip Mellis tries to rid himself of excess weight and solve the problems of his life when a suicide attempt – like much else in his life – fails to achieve its goal. Overweight, weak-willed, and quick to criticise others, Flip has a self-fulfilling fatalism which leads him to stumble through each day, hoping against hope that he can get a job, mend his marriage and rebuild his life. Perceptively observed characters from American small-town life populate the book in hilarious cameos and get in the way of Flip’s well-meaning attempts at reform. This is approachable, laugh-out-loud humour and comes from same agent and editor as the 2012 runaway bestseller The Hundred-Year-Old Man Who Climbed of the Window and Disappeared. It is coming out in paperback (978-0-9551810-7-8 £8.99) in January from new independent publisher, Skyscraper Publications. Order Good for Nothing here 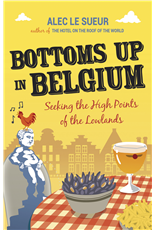 Can you name 10 famous Belgians? Or do you think it is just boring and all those Eurocrats on the gravy train? Until 1993, Alec le Sueur had never been to , so it came as some surprise when in August that year he found himself at the altar of a small church in , reciting wedding vows in Flemish. It was the start, for better or for worse, of a long relationship with this unassuming and much maligned little country. He decided to put worldwide opinion to the test: is really as boring as people say it is? Bottoms up in Belgium: Seeking the High Points of the Low Land sees Alex immersing himself in Belgian culture – and sampling the local beer and ‘cat poo’ coffee along the way. He discovers a country of contradictions; of Michelin stars and processed food, where Trappist monks make the best beer in the world and grown men partake in vertical archery and watch roosters sing (not necessarily at the same time). This colourful and eccentric jaunt is proof that isn’t just a load of waffle. It’s published in paperback (978 1 84953 247 1 £8.99) by Summersdale.
Order Bottoms up in Belgium here 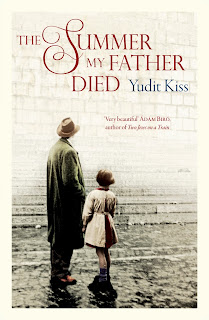 We are delighted to announce that The Summer My Father Died (9781846590948, paperback £8.99) by Yudit Kiss and published by Telegram has been shortlisted for the 2014 Jewish Quarterley Wingate Prize. This prize is awarded to a book that explores themes of Jewish concern in any of its myriad possible forms either explicitly or implicitly. The other shortlisted titles are Shani Boianjiu’s The People of Forever Are Not Afraid, Otto Dov Kulka’s Landscapes of the Metropolis of Death, Ben Marcus’ The Flame Alphabet, Anouk Markovits’ I Am Forbidden and Edith Pearlman’s Binocular Vision. Yudit Kiss grew up a communist in , soaking up her father’s ideology unquestioningly. As her father lies dying, Yudit tries to understand the enigma surrounding his life. As she digs deeper into his tragic history Yudit is forced to confront the contradictions and lies woven into the life of her family – and her country – through the dramatic twists of twentieth century . Lyrical and poetic, The Summer My Father Died is a powerful memoir. The winner will be announced on 26 February, during Jewish Book Week, at a ceremony at in . 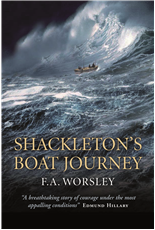 2014 marks the 100th anniversary of Ernest Shackleton’s expedition to - one of the most breath-taking and inspiring adventure stories of all time. Shackleton’s Boat Journey by Frank Worsley is published in new B format edition by Birlinn to mark the anniversary of this classic tale of British bravery, loyalty and inspiring leadership. Ernest Shackleton was 11th in the BBC public poll of 100 Greatest Britons – ahead of Sir Francis Drake, Charles Dickens and Florence Nightingale and Sir Edmund Hillary called this “A breath-taking story of courage under the most appalling conditions”. On August 1, 1914, on the eve of World War I, Sir Ernest Shackleton and his hand-picked crew embarked in HMS Endurance from ’s West India Dock, for an expedition to the Antarctic. It was to turn into one of the most breathtaking survival stories of all time. Even as they coasted down the channel, Shackleton wired back to to offer his ship to the war effort. The reply came from the First Lord of the Admiralty, one Winston Churchill: “Proceed.” And proceed they did. When the Endurance was trapped and finally crushed to splinters by pack ice in late 1915, they drifted on an ice floe for five months, before getting to open sea and launching three tiny boats as far as the inhospitable, storm-lashed . They drank seal oil and ate baby albatross (delicious, apparently). From there Shackleton himself and seven others – the book’s author Frank Worsley among them –went on, in a 22-foot open boat, for an unbelievable 800 miles, through the Antarctic seas in winter, to South Georgia and rescue. It is an extraordinary story of courage and even good-humour among men who must have felt certain, secretly, that they were going to die. Worsley’s account, first published in 1940, captures that bulldog spirit exactly: uncomplaining, tough, competent, modest and deeply loyal.
Order Shackleton's Boat Journey here

And talking of breathtaking journeys made under the most appalling conditions over hundreds of miles – what do we all think of Amazon’s ambitious idea to get their drones to deliver the books? Have a look here to find out more.

Hang on a minute though, Waterstone’s have a much better plan. Very Harry Potter, and I like it a lot!

But do the general public actually want to get books for Christmas anyway – whether or not they are bought in a bookshop or delivered by an owl? Well this little brat certainly didn’t: I must say I found this clip absolutely hilarious!

This blog is read weekly by over 600 booksellers, publishers and publicists. If you would like to order any of the titles mentioned, then please click here to go to the Compass New Titles Website or talk to your Compass Sales representative.
Posted by Compass Rose at Friday, December 06, 2013