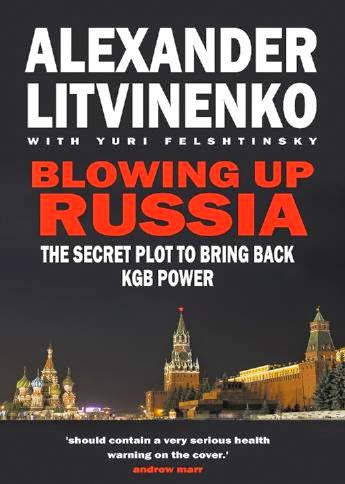 Well, there’s only one news story this week that has all the ingredients of a bestselling spy story – and that’s the extraordinary, scary and tragic tale of Alexander Litvinenko and his polonium poisoning by the Russian state. And Compass brings you the book written by Alexander Litvinenko himself that got him killed – Blowing Up Russia: The Secret Plot to Bring Back KGB Power by Alexander Litvinenko and Yuri Felshtinsky. As Andrew Marr said when it was first published: “This is a book that should contain a very serious health warning on the cover” and sadly for Litvinenko that has certainly proved to be the case. Alexander Litvinenko served in the Russian military for more than 20years achieving the rank of Lieutenant-Colonel. In 1999 he was arrested and imprisoned on charges that were later dismissed. After continuing further charges (equally dismissed), he escaped from , and lived with his family in . In his new forward to this book, Litvinenko's friend and collaborator Yuri Felshtinsky reveals that Litvinenko worked for 's secret service. He was murdered in 2006 in . Felshtinsky was one of the last people to speak to Litvinenko hours before he succumbed to radio-active poisoning by Polonium 210. Blowing Up Russia is, as the Independent called it, a “pull-no-punches expose”, which was first published in 2013. The Sunday Times called it “A vivid condemnation of the Putin regime as has yet been written” while the Times said “For clues as to who wanted Alexander Litvinenko, you need look no farther than Blowing up Russia.”  The Litvinenko Enquiry will now  run for ten more weeks, during which the role of this book will be mentioned, and Britain’s relationship with Russia is under the spotlight on many other levels too – so you really do need this title in your bookshops! Blowing Up (£8.99, pb, 978 1908096234) is published by and has been featured in pretty much every single national newspaper already – with lots more to come! You can find out more and order Blowing Up Russia here 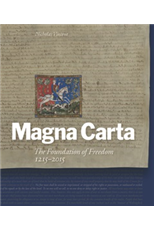 Phew! Let’s go back in history to a time before was quite such a scary place. This year of course is the 800th anniversary of King John’s sealing of Magna Carta - the most influential and far-reaching legal text the world has ever known. It is the founding document of individual freedom throughout the world, and Magna Carta: the Foundation of Freedom by Nicholas Vincent is published by Third Millennium Publishing .This is the definitive account of Magna Carta’s genesis and subsequent impact and is published with the official support of the Magna Carta Trust. Professor Nicholas Vincent is joined by a range of experts on Magna Carta from across the world to reflect on its enduring significance. This magnificent book has 192 pages in full colour with over 250 integrated colour illustrations, and as I have previously mentioned, the hardback (978 1 908990280, £44.95) of Magna Carta: The Foundation of Freedom is published in February, but it will no doubt be the paperback (pb, 978 1 908990488 £24.95) that will be the big seller, and that is coming in April. Magna Carta: The Foundation of Freedom was runner up in the prestigious Longman History Today Awards, in the category Best Historical Picture Researcher of the Year 2015. Magna Carta will be a prominent feature on the literary festival circuit this year, and four of the contributing authors will be appearing at events across the country:

You can find out more and order Magna Carta here

And talking of the founding of freedom, and what it means to rever our British heritage – have a look here at 32 things that we Brits all know and love - on Buzzfeed of course! Following their bestselling debut novel, Spring Tide, Cilla and Rolf Börjlind are back with the second instalment in the series, Third Voice.  Samira is dead. She died last night. But now she is looking down over the roofs of Marseille. She remembers how he strangled her, how he bashed in her skull with an ashtray. How he cut off her head and buried her body in six different places. She hopes someone will find her… some day. Olivia Rönning is still struggling to come to terms with her brutal entry into the world. Cut from the womb of her murdered mother, with only seconds to spare, she is left with haunting dreams, brutal feelings and guilt. From now on she has resolved to rely solely on herself. When Olivia’s friend Sandra discovers her father’s body hanging in the hall of their house, the police initially assume suicide. But something doesn’t sit right. Having veered away from her budding career as a police office, Olivia knows she should leave this alone – but she is just too close to this case, it’s personal now. Yes, I think you can definitely say we are back in the dark world of Scandi noir – and Third Voice promises to be just as gripping as the first novel in what the Express called “a major new crime series.” Third Voice (pb, 9781843915553, 8.99) by Cilla and Rolf Börjlind is published in March by Hesperus Nova and you can find out more and order it here 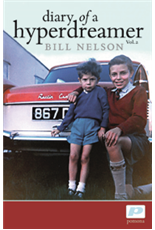 I don’t know about you, but I’m in the mood for a bit of music. Who’s heard of Bill Nelson and Be Bop Deluxe? Here’s a short burst to remind you. Bill Nelson is in fact one of the most respected creative forces in the . He came to prominence in the 1970s with his band Be Bop Deluxe and later Red Noise. He still releases a prolific amount of new music on various labels throughout the world and the first volume of his day-by-day diary in which he reflected on life, art and the nation; Diary of a Hyperdreamer, Volume 1; was very popular and had to go to reprint with interest throughout the world when it was published . Now in March from Pomona Books comes Diary of  Hyper Dreamer Volume Two. His unique perspective is fed by a lifetime’s work creating and producing music, photography, painting and video – pop, rock, film scores, television and ad themes, pop videos, as well as performance and video art. Written from his home in a hamlet in north where he lives with his Japanese wife Emi; it includes reflections on his various and diverse creative projects, mixed with philosophical and political musings. It also includes homespun details of an ordinary domestic life where he looks back at his time as a pop star, the best places to get a haircut in and, of course, mortality. Be Bop Deluxe and Red Noise were massively popular and influential and Bill Nelson will promote this book at the sell-out shows he is playing throughout this year. A ‘Nelsonica’ festival is held each year attended by hundreds of fans. Diary of a Hyperdreamer Volume Two by Bill Nelson (£9.99, B-format paperback, 978 1904590316) is published in March and you can find out more and order it here.

Talking of pop music and being a Hyperdreamer; about a Top Five Songs about dreaming? I nominate this Mamas and Papas classic - and you’ve got to include this Monkees favourite of course. What’s that you say Billy? Get outta your dreams and into your car? Well alright then. Do we really think sweet dreams are made of this? And finally, yes I think we have to have another one from Mama Cass.  And please can I have all of the outfits worn in this week’s top five videos! 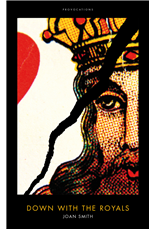 Who’s watching Wolf Hall? Fantastic isn’t it. And it reminds us of a time when royalty really did matter. Are we still as interested as to who rules us? And should the descendants of HenryVIII even be ruling us at all? Author Joan Smith feels that after Princess Diana, there seemed some hope that this country would finally grow up and get rid of the monarchy, the symbol of inequality and privilege. But the royals have been smart and were able to cleverly re-establish themselves. Now with William, Kate and their babies, it has become almost treasonable to argue for an elected head of state; which is why; according to Joan Smith that is exactly why it must be done. Down with the Royals is a new hardback in the Provocations series - short polemics composed by some of the most intriguing voices in contemporary culture. Never less than sharp, intelligent and controversial, Provocations is a major new contribution to some of the most vital discussions in society today. Down with the Royals by Joan Smith (£10.00, pb, 9781849548298) is published by Biteback in March and you can find out more and order it here 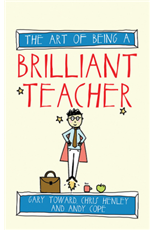 Schools are in the news again this week, with the publication of the controversial new league tables. But what really makes a good educator? Is it really something that Ofsted can measure? Or is it that indefinable something unique that ensures your pupils will remember you for life? The Art of Being a Brilliant Teacher would have us believe that with the right techniques, guidance, skills and practise teachers can masterfully face any situation the classroom could throw at them. With their fresh perspectives, sage advice and a hint of silliness, Andy Cope Chris Henley and Gary Toward are convinced that they can show teachers how to unleash their brilliance. This paperback is for any teacher who has ever had a class that are angels for colleagues but Lucifer incarnate as soon as they cross the threshold of their classroom. Or who had their energy and enthusiasm sapped by a staffroom Grinch. With plenty of practical advice and top tips, this book will show teachers how to be the best. Andy Cope is the author of the famous Spy Dog books, a trainer and keynote speaker. Gary Toward is a trainer and keynote speaker who has previously taught in seven schools countrywide and has, more recently, been a teaching head. Chris Henley is a trainer and keynote speaker who has been teaching for over thirty years in three different secondary schools. There are nearly half a million teachers in the at present (yes you read that right, the exact figure is 478,839) so that is plenty of people who would like to read this book! The Art of Being a Brilliant Teacher by Toward, Chris Henley and Andy Cope (9781845909413, £9.99, pb) is published by Crown House Publishing in March and you can find out more and order it here

And just to finish, let’s have a lesson on Beowulf from Jack Whitehall showing us how NOT to be a brilliant teacher!

This blog is taken from a newsletter which is sent weekly to booksellers as well as publishers and publicists. If you would like to order any of the titles mentioned, then please click here to go to the Compass New Titles Website or talk to your Compass Sales representative.
Posted by Compass Rose at Friday, January 30, 2015