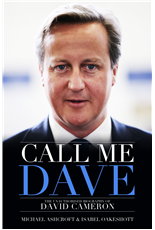 Wow! Or should that be Oink!  I think it’s fair to say that we have never had a book whose contents have made ALL the front pages of ALL the newspapers – and exploded all over social media as well! Call Me Dave by Michael Ashcroft and Isabel Oakeshott (hb, £20.00, 978 1849549141) has had the largest ever initial print run for any Biteback title – so congratulations to them, thank you very much Daily Mail, and good luck booksellers – I hope you all sell lots and lots of copies when it is published on 5 October! Scroll down to the end of this newsletter to see the best of the jokes on Twitter!
You can order copies of Call Me Dave here 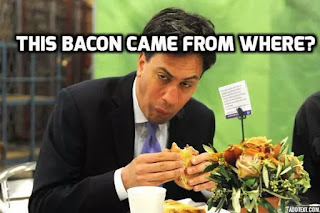 And I think you really know you’ve made it as a publisher when Cassetteboy makes a film based on one of your books! Watch Gettin' Piggy With It here! 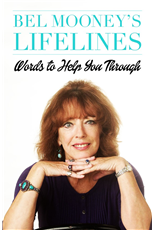 Talking of the Daily Mail; one of its most popular columns is ‘And Finally’ – a readers’ problems page by Bel Mooney. Bel is unique among agony aunts in that she gives of herself to her readers in return for their confidences, and readers regularly write to say that this is the first thing they turn to in the newspaper.  Bel Mooney has been one of this country’s best-loved journalists for over 40 years, and this hugely popular Daily Mail column reaches around six million people every week. Now, for the first time, these columns have been revised, updated, and collected in a bedside book: Bel Mooney’s Lifelines: Words to Help You Through which is packed with insight from a writer whose own life experiences have taught her much about the workings of the human heart. Designed for dipping into, these mini essays and accompanying quotations encompass joy, family life, sadness, resilience, the love of nature, gratitude, possibility, hope and encouragement. These are anecdotes and insights to challenge and uplift, to entertain and inform. Bel Mooney’s Lifelines: Words to Help You Through (pb, £9.99 9781849549325) is published by Robson Press at the end of October and you can find out more and order it here 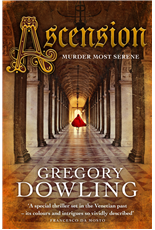 A great review from the Times on Saturday, for Ascension by Gregory Dowling (pb, £9.99, 978 1846973130), who have made it their Historical Fiction Book of the Month. Entitled “death, drag and deceit in ” they describe it as “stylish, clever and gripping”. Ascension is the first in a new series of mystery thrillers set in 18th century , and as the Times says; it is a fast-paced gripping story, with lots of action, murder, romance, and long-buried secrets. Set in 1749, the city has become Europe’s pleasure capital, famous for its gambling dens, its courtesans, its hectic carnival, its music, art and theatre – and the most highly organised secret service in . Something momentous is being planned for the Feast of the Ascension, ’s most important and spectacular holiday, but can the hero, a reluctant spy - prevent the day from turning into bloody mayhem? This is a very handsome paperback - dripping in gold foil and really rather gorgeous; It’s just been published by Polygon and you can find out more and order it here.

Ooh who doesn’t love a novel set in – here’s a good list of the top ten as voted for by readers on tripfiction.com – and since films set in are equally alluring – here’s the Telegraph's top ten list of movies featuring this dazzling city. 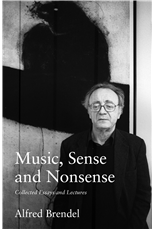 There’s a terrific review for Music, Sense and Nonsense: Collected Essays and Lectures by Alfred Brendel (hb, £25.00, 978 1849549059) in this Saturday’s Guardian. Alfred Brendel is arguably the greatest living pianist of our time, and in addition, he has long been one of the world’s most influential writers on music. Alan Rusbridger says “it’s difficult to think of any other living figure who could have produced a book like this” – you can read the full review here. This important book brings the clarity and originality of expression that characterise Brendel’s performances to the printed page. Whether discussing Bach, Mozart, Beethoven, Schubert, Liszt, Schoenberg or other pianists, his reflections will prove invaluable to music lovers. It contains all of Brendel’s essays and articles, (published originally in two classic books, Musical Thoughts and Afterthoughts and Music Sounded Out), along with new, previously unpublished material, bringing it completely up to date. There was an interview with Brendel talking about this book on Classic FM at the start of September, and also a review in the Independent calling it a “glorious compendium of the great pianist's writings on music” which you can read here: and an Alfred Brendel special on BBC Radio 3, Music Matters focusing on the book, which is published by Biteback .
Find out more and order it here

For a bit of tranquillity in your life, here is five minutes of Brendel playing one of his favourite composers - Schubert. Now that’s just what you need to calm you down on a frenetic Friday! 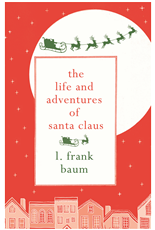 Well, I’m afraid there’s no doubt that we are drawing ever closer to you know what – yes, the elves have already lined the shelves of Sainsbury’s with crackers and puds. For those readers still full of innocent wide eyed appreciation rather than cynical world-weary irritation; comes The Life and Adventures of Santa Claus (pb, £7.99, 978 1843915904) by L Frank Baum; published by Hesperus Minor in October. L. Frank Baum (author of course of The Wonderful Wizard of Oz) takes us back to the fantastical origins of so many of our Christmas traditions as well as the humble origins of Santa Claus himself. I’m willing to bet that none of you knew that, as a baby, Santa Claus was found by a woodsman in the , and placed into the care of the lioness, Shiegra, and the wood nymph, Necile? When he grew up, they encouraged him to leave the forest so that he could see for himself the sad things in the world such as war and poverty, of course once Santa came to understand these issues, he made it his mission to cheer up us all up a bit and do good deeds. Ho ho ho! This tale unfolds the surprising reasons why Santa Claus invented toys, why he must deliver them at night and how he came to use reindeers to take him all over the world. Adults and children alike will be captivated by this magical, feel-good story, full of panache and imagination;  it’s clearly the ideal stocking filler and I think this attractive B-format paperback could do very well indeed! Hesperus Minor are doing a fab job bringing forgotten children’s classics back into print for new generations to discover and older generations to revisit – and there is no other mainstream edition of this title available. Find out more and order The Life and Adventures of Santa Claus here 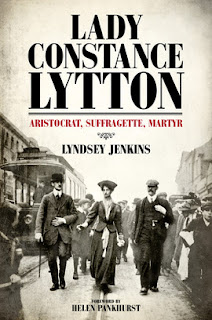 Last week I mentioned Suffragette: My Own Story by Emmeline Pankhurst (978 1843915591, £7.99, pb) the original autobiography of Emmeline Pankhurst If you are getting together all your women’s rights titles to tie in with the new film Suffragette, then don’t forget to also include Lady Constance Lytton: Aristocrat, Suffragette, Martyr by Lyndsey Jenkins (hb, £16.00, 978 1849547956) which was published back in March by Biteback. This fascinating biography tells the story of Lady Constance - the most unlikely of suffragettes who began life as one of the elite, but abandoned a life of privilege to fight for women s rights. 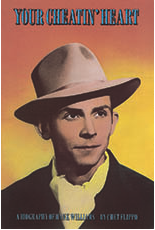 Who doesn’t love a bit of Hank Williams? The world is about to remember just what a great singer/songwriter he was, with the release of a major new biopic I Saw the Light at the end of November,  starring Tom Hiddleston as Hank  and Elizabeth Olsen  as his wife. You can watch a short clip of Tom talking about it here. The film is based on Hank Williams: A Biography (published by Little, Brown) and its author expert Colin Escott, has referrenced Your Cheatin’ Heart by Chet Flippo as the classic Hank text. Your Cheatin’ Heart: A Biography of Hank William by Chet Filippo (pb, 978 0859652322 £14.99) comes out in paperback in October by Plexus. It’s a meticulously researched, compelling biography; a history of country music encapsulated in one man’s career. Hank Williams was the first musician to truly lift country out of the backwoods and into the charts, courtesy of such heartfelt hits as Your Cheatin’ Heart, Cold Cold Heart and I’m So Lonesome I Could Cry – songs of such undeniable emotive force that they transcend time, place and audience. Bob Dylan and Bruce Springsteen have hailed him as a major influence, and his songs have been recorded by such diverse artists as Elvis Costello, the Carpenters and the Cowboy Junkies. But few could have known that Williams was privately suffering most of what he sang about so convincingly. Raised in in abject poverty, with an absentee father, a controlling mother, and an equally domineering first wife, he also had a crippling defect of the lower spine. Left untreated, the condition eventually drove him to drugs and alcohol. Your Cheatin’ Heart is 256 pages, with 60 photos and you can find out more and order it here.

And here is  a little bit of Hank to finish! Lovely!

Compass is on Twitter! Follow us @CompassIPS. This week the twittersphere appears to have been taken over by #piggate... 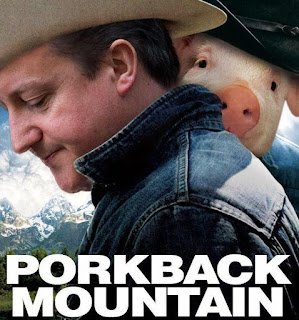 Gary Lineker ‏@GaryLineker
A bacon sandwich for breakfast has lost its appeal...you just never know do you?
Jack Seale ‏@jackseale
Because that was almost as good as "Toff on swine, toff on the corpses of swine"
Louise Ann Davies ‏@louanndavies
Imagine waking up and thinking "I hope no one mentions my sexual abuse of a dead pig today" - the life of a PM
David Cameron ‏@DavidChameron
As a final word on #piggate can I just say in my defence that she looked nothing like her Tinder profile picture.
Sallyjo ‏@sallyjo
#Corbynnottheonlyonelovinghamass
Markymark ‏@themarkster
Dave's mates told him it was snouts in the trough.  But that was old hat, so he changed it to toffs in the snout.
Uncut ‏@UKuncut
Why didn't the BBC report on #PigGate?! It's silence of the hams...
Sue Frent ‏@frenton
I hope the migrants coming to this country respect these ancient British traditions and are prepared to integrate fully with our native farm animals.
MissusVee ‏@MissusVee
"Sorry David, I can't hear you very well... is there some crackling on your end?"
Joe Bloggs ‏@Blogsy
Well the debate as to whether he prefers West Ham to Aston Villa is finally over.
Maeve B @MaeveyB
#Piginapoke or #pokeinapig?
BBC Newsnight ‏@BBCNewsnight
"I mean who cares?" Cameron biographer @AnthonySeldon on #piggate.

This newsletter is sent weekly to over 700 booksellers as well as publishers and publicists. If you would like to order any of the titles mentioned, then please click here to go to the Compass New Titles Website or talk to your Compass Sales representative.
Posted by Compass Rose at Friday, September 25, 2015