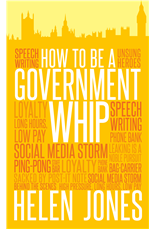 Aside from being a bookseller, what is your dream job? Well, a surprising amount of us seem to want to work in Government these days – is it the promise of those off-shore tax accounts I wonder? How to be a Government Whip is the latest title in the acclaimed How to Be series from Biteback. It is going to be serialised in the Mail on Sunday on 17 April which is great publicity for it. How to Be a Government Whip is a light-hearted, behind-the-scenes guide to the roles and functions of the Whips - those party enforcers tasked with imposing discipline on members of the House of Commons. Its author, Helen Jones describes the long hours and endless debates, and writes also about the dark arts employed to deal with the rebellious and the disaffected. She reveals what Whips really think of their colleagues, including ministers and former ministers, and how they view the civil servants who believe Parliament gets in the way of government.  Helen Jones served in the Whip’s Office in Gordon Brown’s Government so she really knows her stuff, and this is a fascinating guide to this most mysterious but important of roles in the British political system. How to be a Government Whip by Helen Jones (£12.99, pb, 9781785900624) is published this month, and the other titles in the series How to Be an MP (pb, 9781849542203) How to Be a Minister (pb, 978 1849547321) and How to Be a Parliamentary Researcher (pb, 978 1849549301) are also available now. Find out more and order it here. 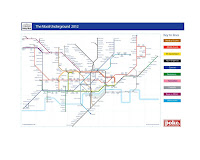 Now don’t get me wrong, publicity for one of our titles in the Mail is always great news as it has gazillions of readers – but if you’ve ever wondered whether any of them are actually capable of getting to grips with intelligent subjects, then you will find this tube map of where the Mail’s interests really lie highly amusing!

And if you’re in a mood for a bit of politics, then I’m sure you’ll very much enjoy this latest offering from the brilliant Cassetteboy! 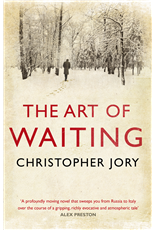 Russia, 1943. A girl from Leningrad and a soldier from Venice stand together on the edge of wilderness. He is a shadow of a man, trapped behind wire, an enemy in her land. Taking something from her pocket, she slips her hand through the wire and catches her skin on a barb producing a tiny drop of blood. ‘Have this.’ The man takes the gift – a small crust of bread, a little piece of hope. Its memory will nourish him, keep him alive, on his long journey home to Italy. But when he returns, he must decide which path to take; whether to be true to the love of the girl who saved his life, or to pursue his unfulfilled vow and seek revenge on the man who had ruined his home and his family. The Art of Waiting by Christopher Jory is a tale of love, revenge and survival against the odds, set in Venice and Russia in the 1940s This is the second novel from Christopher Jory, an exciting and very promotable new talent in historical fiction with the ability to evoke a powerful sense of place thanks to his own extensive travelling. The Art of Waiting by Christopher Jory (pb, 978 1846973628, £9.99) is published by Birlinn in May and you can find out more and order it here.

Many of you sell magazines in your bookshops, and I’m pleased to be able to tell you that Britain’s most entertaining and authoritative poetry magazine PN Review is now available to order from Carcanet via Compass. Simon Armitage described it as “The most engaged, challenging and serious-minded of all the UK’s poetry magazines.” There are six issues a year of this A4 journal with its classy and distinctive covers, and the retail price is £6.99. All trade sales are sale or return, and in any shop which places a standing order for three or more copies, the poetry or literature buyer will be entitled to a personal free subscription to PN Review, to be sent to your home address. If you would like to stock PN Review in your shop then please talk to your Compass Sales Manager, or email nuala@compass-ips.london for more details.

OMG this is very funny – and also scary; a selection of original Donald Trump quotes as voiced by Winnie the Pooh! 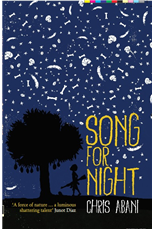 This next title comes with the highest of praise. Esquire Magazine said “Abani … brings to mind Babel, Hemingway, McCarthy” while Dave Eggers said “Chris Abani might be the most courageous writer working right now. He writes like an angel.” Junot Díaz said “Chris Abani is a force of nature … a luminous, shattering talent” and the New York Times wrote “Song for Night contains, at once, an extraordinary ferocity and a vulnerable beauty all its own.” Coming in May from Telegram is a new edition of this acclaimed haunting story of a child soldier in West Africa. Trained as a human mine detector, My Luck, a boy soldier in West Africa, witnesses and takes part in unspeakable brutality. At twelve his vocal cords are cut to prevent him from screaming and giving away his platoon’s presence should he be blown up. Awaking after an explosion to find that he has lost his platoon, he traces his steps back through abandoned villages and rotting corpses – and through his own memories – in search of his comrades. 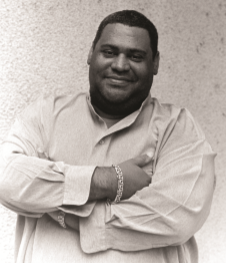 Song for Night is a lyrical, poignant journey through the nightmare landscape of brutal war. Abani’s most recent novels have been successfully published by Penguin – if you are not familiar with his work you can find out more on  www.chrisabani.com. He was featured on the BBC’s Open Book last month discussing the role of race, culture, and language in fashioning our sense of self: you can listen again to that here. Song for Night by Chris Abani (pb, 9781846592041, £7.99) is published in May, and you can order it here.

We do love a good quiz here at Compass – so well done to Sylvie, Mark and the team at Waterstone’s Cambridge for running their incredibly, nay legendary, popular Book Quiz – looks like a great evening! 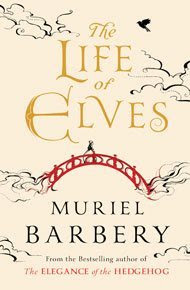 Copies of The Life of Elves have just arrived at Compass Towers and they look absolutely terrific. This latest novel by Muriel “Elegant Hedgehog” Barbery, was released in France last year and after a long seven-year wait, her many fans are in for a treat. A recent article in the New York Times describes what The Life of Elves is all about: “Now she has surprised readers and critics by delivering an enigmatic and beguiling fairy tale, unicorns and all. The story centres on two 12-year-old girls: Maria, a charmed orphan with supernatural powers who is taken in by villagers in France, and Clara, a clairvoyant piano prodigy in Italy, who begins having visions of Maria and realizes their fates are intertwined. The girls never meet, but they are drawn together in an epic supernatural battle between the world of elves, a land of swirling mists, shape-shifting creatures and celestial music and art, and an evil elf faction seeking the end of humanity.” The Life of Elves has elements that are very close to Barbery’s life such as her fascination for Japanese gardens and her love for art and music. Whether you are a fantasy reader or not, you will find this novel hard to resist. With echoes of Tolkien, J.K. Rowling and Milton; Muriel Barbery has created two heroines whose personality and adventures will charm and entertain. You can read an interview with Muriel Barbery talking about the book in the Independent here and The Life of Elves (pb, 978 1910477212 £12.99) is published by Gallic in May.

And talking of bestselling fantasy authors did you see the EXTRAORDINARY amount that the chair that JK Rowling sat in while writing Harry Potter sold for last week?! Read about it on BuzzFeed here! 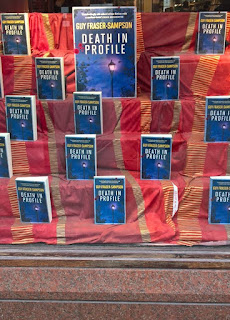 Thanks very much to Daunt Books in Marylebone for a great window display for Death in Profile by Guy Fraser Simpson. This is what Christopher Brookmyre has described as “Comfortingly old school crime fiction with a modern twist” and what Ruth Dugdall, a CWA Debut Dagger Winner called “classy and sophisticated … if you thought the Golden Age of crime writing was dead, then read this.” This crime story speaks to a contemporary audience yet at the same time harks back to the Golden Age of detective fiction. Intelligent, quirky and mannered, it is something of a love letter to the detective novel evoking the elegance of an earlier time, and the spirit of the one and only Lord Peter Wimsey.  It’s just come out from Urbane, and you can order it here. 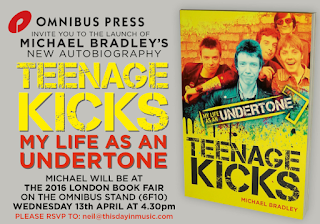 Teenage Kicks: My Life as an Undertone by Michael Bradley is launched at the London Book Fair next week. Teenage Kicks was John Peel’s all-time favourite record, and The Undertones became one of the most fondly remembered UK bands of the post punk era. Michael Bradley‘s story is a bitter-sweet, heart-warming and occasionally droll tale of unlikely success, petty feuding and playful mischief during five years of growing up in the music industry.   The Undertones stuck to their punk rock principles, signed terrible deals, made great records and had a wonderful time. They broke up in 1983 when they realised there was no pot of gold at the end of the rock and roll rainbow.  You can hear Michael talking about his book on You Tube here and he continues to play bass with The Undertones, who reformed in 1999. Teenage Kicks: My Life as an Undertone by Michael Bradley (pb, 978 1785581809, £16.99) is published by Omnibus; find out more here.
And here it is: the original raucous record that you just have to pogo along to! I also really liked the One Direction Comic Relief version you can watch here!

Compass is on Twitter! Follow us @CompassIPS. This week we’re enjoying these tweets on the creative process of actually being an author at #amwriting….
The UnNovelist ‏@TheUnNovelist  It's impossible to explain creativity. It's like asking a bird, 'How do you fly?' Eric Jerome Dickey
John Simmons ‏@JNSim  Much ‘writing time’ is spent not writing a word. It’s not necessarily writer’s block; it’s just thinking time
Novelicious ‏@noveliciouss Don’t tell me the moon is shining; show me the glint of light on broken glass. Anton Chekhov
Eva Jordan Writer ‏@EvaJordanWriter  "Write a page a day, only 300 words, and in a year you have written a novel" Steven King


Jon Winokur‏@AdviceToWriters A writer’s duty is to register what it is like for him or her to be in the world. ZADIE SMITH
The UnNovelist ‏@TheUnNovelist A 1st draft is like exploratory surgery - open the body, see what's there, come back and fix.
Sally Ann Melia ‏@Sally_Ann_Melia Words and ideas can change the world - Dead Poets Society.
Novelicious ‏@noveliciouss Picking five favourite books is like picking the five body parts you'd most like not to lose. Neil Gaiman
Will Hill ‏@WillHillauthor Writing a character so awful that I just want terrible things to happen to him. Luckily, I have that power.
That’s all for now folks! More next week!
This blog is taken from a newsletter which is sent weekly to over 700 booksellers as well as publishers and publicists. If you would like to order any of the titles mentioned, then click here  or talk to your Compass Sales representative.
Posted by Compass Rose at Friday, April 08, 2016