It was The London Book Fair this week and I really hope any indie booksellers who attended had a thoroughly good time! Apparently the indie authors were not pleased about a perceived side-lining of the Author HQ area at the fair this year, with one author calling it a “step backwards” and saying that “it’s about time that authors - the creators of the media this industry revolves around - were recognised as a valuable part of LBF.” You can read the full story in The Bookseller here
There’s more news from the fair in the Guardian which you can read here and here’s a fun post from agent Julie Mushens about exactly what does happen in between the wheeling and dealing and official business!
See our favourite tweets about the LBF at the end of today’s blog! 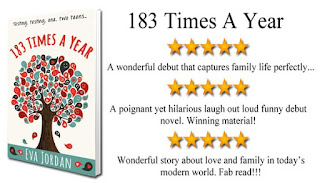 183 times a year is reportedly the number of times it is normal for a girl to argue with her mother. Unfortunately for Lizzie it seems more like 183 times a day! Sound familiar? Then you’ll probably like 183 Times a Year which is a brilliantly funny observation of contemporary family life.  It introduces us to Lizzie; exasperated mother and the frustrated voice of reason to her daughters’ teenage angst. She gets by with good friends, cheap wine and talking to herself. Meanwhile 16-year-old Cassie, the Facebooking, Tweeting, selfie-taking, music and mobile phone obsessed teen hates everything about her life. 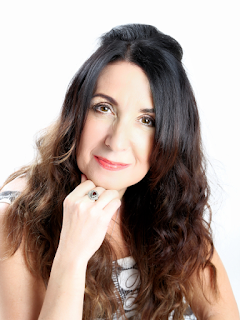 She longs for the perfect world of Chelsea Divine and her 'undivorced' parent and Joe, of course. However, the discovery of a terrible betrayal and a brutal attack means that Lizzie and Cassie are forced to reassess the important things in life as they embark upon separate journeys of self-discovery. A poignant, heartfelt look at that complex and diverse relationship between a mother and daughter; 183 Times a Year (pb, 978 1911129813, £7.99) by Eva Jordan is out from Urbane this month and you can find out more about it here.
You can read a great interview with Eva Jordan here on Word Press

As you may already know, 2016 marks the 100-year anniversary of the Battle of the Somme. One of our finest British poets Simon Armitage has been commissioned by 14-18 NOW (a cultural programme to make the centenary of WW1) to write a sequence of poems in response to photographs of areas associated with this battle.  It took place on the Western Front between July and November 1916 – the first day of the offensive was the bloodiest in British military history. Armitage has written 30 poems of between 2 and 20 lines and has chosen 12 images and a further 13 photographs to contextualise them. The book is called Still, and will act a catalogue for an exhibition of the same name which will first be mounted at first at the East Gallery in Norwich and subsequently go on a national tour. Still is a very high quality special edition of poetry and photography, designed in a large landscape format. As well as poems and photographs it contains contemporary maps, prose texts, fold-outs and decorated endpapers. Still by Simon Armitage (hb, 978 1911253136, £25.00) is published by Enitharmon in July and you can find out more about it here.
You can watch an extraordinary four-minute film on the Battle of the Somme here on YouTube. Shot on location on the Western Front in 1916, this short film was produced privately and proved more popular than the official films that the War Office had made during the war despite being shockingly graphic. Audiences, well aware of the real conditions in the trenches, seemed to prefer a film that didn't try to pretend that war was easy or fun. 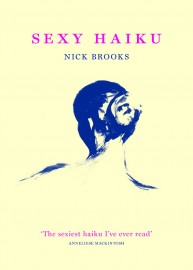 Sexy Haiku by Nick Brooks (hb, 978 1910449561, £9.99) is published this month by Freight. Ewan Morrison, author of Swung and Tales From the Mall said of it “This takes haiku into radically new territory - filthy, hilarious, arousing, tragic and most surprisingly of all, utterly modern. A stroke of zen-like genius.”  These engaging and accessible haiku are in turns romantic, funny, erotic and playful. a powerful and explicit collection that follows the peaks and troughs of one man's relationships. To be read alone or shared with the one you love, this is a collection wrought with sexual tension. Find out more here
A woman asks her new lover:
Why don't you write about me?
legs parted wry smile between
dark curls maybe I will.
If you like the sound of this, you can hear Nick more reading assorted poems from this beautifully packaged collection on a 1-minute film here 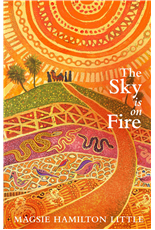 Two years ago Magsie Hamilton Little sold her home and travelled to central Sahara to rethink her life. There she met up with two Tuareg nomads, and ended up buying and making friends with a sick camel, which they consequently christened Fleabag for obvious reasons.  The Sky is on Fire is a book about courage, friendship, freedom and faith. It brings to full circle the journey that the author began in her first book, Dancing with Darkness and gives an insight and perspective into one of the least understood tribal peoples of Africa, the Tuareg. It also asks key questions that we may all have about the deep rifts facing East and West and the issues of refugees and migration that divide the world today. This is travel writing in the tradition of Eat, Pray, Love and Wild – a story of adventure and self-discovery. The Sky is on Fire by Magsie Hamilton Little (pb, 978 1906251765 £8.99) has a really lovely evocative cover and is published by Max Press in July. You can find out more about it here. 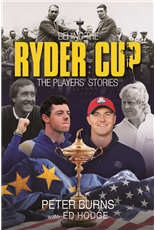 Everyone has gone bonkers for golf following Danny Willett's extraordinary victory at the 2016 Masters. You can re-live that moment here! A good time then to tell you about Behind the Ryder Cup: The Players’ Stories which is the latest in the best-selling series of behind-the-scenes histories from Arena Sport – which have sold over 30,000 copies. The 41st Ryder Cup is at Hazeltine, Minnesota in September 2016, and this fully illustrated hardback is a history of the Ryder Cup like you have never experienced it before. From the origin matches that preceded the first official encounter between Britain and America in 1927, all the way through to Gleneagles in 2014; this is the complete history of the Ryder Cup – told by the men who have been there and done it. With exhaustive research and exclusive new material garnered from interviews with players and captains from across the decades, Behind the Ryder Cup unveils the compelling truth of what it means to play in golf’s biggest match-play event, where greats of the game have crumbled under pressure while others have carved their names into sporting legend. Behind the Ryder Cup by Peter Burns and Ed Hodge (hb, 9781909715318, £20.00) is packed full of exclusive and previously untold stories and you can find out more and order it here. 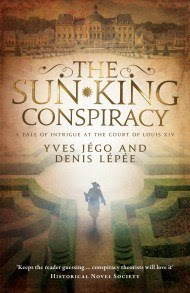 It’s always interesting to debate the validly or otherwise of historical fiction – and there is an interesting article on that subject in the Guardian here. But the fact remains, most of us love love love a good historical drama – be it in book form or on TV, and I  certainly am already getting rather over-excited about Versailles, a bold 10-part French drama about the court of King Louis XIV to be broadcast on BBC Two later this year. You can watch a trailer here – it looks extremely gripping and altogether FABULOUS! With excellent timing, Gallic have just published The Sun King Conspiracy by Yves Jego and Denis Lepee (pb, 9781910477359, £8.99) This tale of religious brotherhoods, corruption, romantic intrigue and political scheming will give you an insight into the world of intrigues and secrets in the court of Louis XIV; perfect reading in preparation for what promises to be the most talked-about TV series of 2016! The Sun King Conspiracy is set in 1661 as Cardinal Mazarin lies dying. As a fierce power struggle develops to succeed him, a religious brotherhood, guardian of a centuries old secret, also sees its chance to influence events. But events take an unexpected turn when a set of documents from Mazarin’s palace fall into the wrong hands. Their contents have the power to change the course of history for France, and for the Sun King. Louis XIV had the longest reign in European history (1643-1715). During this time, he brought absolute monarchy to its height, established a glittering court at Versailles, and fought most of the other European countries in four wars. If you’re not familiar with this particular bit of history - here are ten facts about him – and you can find out more about The Sun King Conspiracy here!


In honour of Louis XIV and to finish with a bit of music – how about my top five Louis songs!
The “Louis” can be the title or the singer – so let’s start with this retro classic from 1980 followed by surely everyone’s favourite Louie here! Number three: this classic from The Kingsmen I think. Then how about this absolute belter from Della Reese. But number one has to be Louis playing Louis – doesn’t get much classier than that!

Compass is on Twitter! Follow us @CompassIPS. Here are some of our favourite London Book Fair tweets from this week...
Joanne Harris‏@Joannechocolat  Once again, that time of year where authors give thanks for not having to attend the London Book Fair...
Freight Books ‏@FreightBooks We're all back in the office after #LBF16 and humblebragging about exhaustion and good times. Might nap in the book cave.
Jonathan Ruppin ‏@tintiddle Well, I'm not sure the London Book FAIR has lived up to its name. No candy floss and you just can't get a goldfish home in a tote bag.
Urbane Publications ‏@urbanepub  Checklist for #LBF16 tomorrow - coffee fund, lovely books, business cards, AIs, free badges, banter and clean underwear. I'm ready!
Freight Books ‏@FreightBooks  Is #LBF16 flu a thing?
Laura Waddell ‏@lauraewaddell  Gail Rebuck at LBF: Apparently the UK ran out of silver ink during Fifty Shades reprinting frenzy.
Urbane Publications ‏@urbanepub  432 emails this morning - ah, the joys of #LBF16
Andrew smith ‏@andrewaxiom On seeing thousands of books at LBF, one asks, 'Does the world really need MY book?' Answer: 'YES!'
Sean O'Keeffe ‏@okeeffe Busiest, most upbeat @LondonBookFair in 10 yrs attending. Books have got their mojo back, though we never really went away.
The London Book Fair ‏@LondonBookFair Thanks again to everyone who attended #lbf16 See you a little earlier next year, the 14-16 of March!!
That’s all for now folks! More next week!
This blog is based on a newsletter which is sent weekly to over 700 booksellers as well as publishers and publicists. If you would like to order any of the titles mentioned, then click here  or talk to your Compass Sales representative.
Posted by Compass Rose at Friday, April 15, 2016