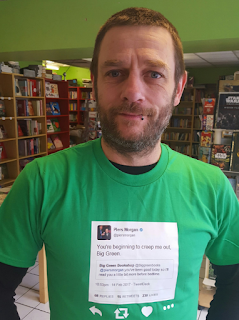 Let’s give a big three cheers to the Big Green Bookshop in Wood Green, London and its co-owner and tweeter Simon Key who has come up with a very amusing way to get involved in the online spat between Piers Morgan and JK Rowling. Simon is tweeting Harry Potter And The Philosopher’s Stone line by line to Piers after he claimed he would “never read” JK’s work The bookshop owner has now been going for days – at the time of writing he was up to tweet number 744 “The lighted dial of Dudley's watch, which was dangling over the edge of the sofa on his fat wrist told Harry he’d be eleven in ten minutes time.”  You can read the whole story in the Metro here and on Sky News here – nice one Simon – we love it! 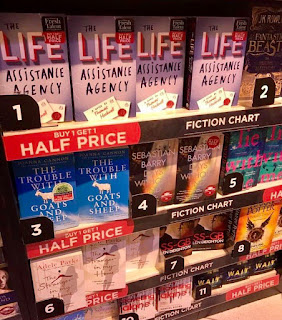 Well done to Thomas Hocknell author of The Life Assistance Agency (pb, £8.99, 978 1911129035) which has hit the number one slot in the in the WH Smith Fresh Talent Promotion which is running across all W H Smith Travel's key locations until 30th March and is published by Urbane. 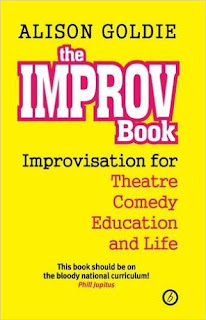 Last week I mentioned the very excellent range of acting titles from Oberon – eleven essential books for aspiring thesps, all grouped together as The Actors Toolkit. The link to the Oberon website where you can find the range wasn’t quite right – so here is the correct one: www.theactorstoolkit.co.uk . I particularly like The Improv Book: Improvisation for Theatre, Comedy, Education and Life (pb, £12.99, 978 1783191802) by Alison Goldie. A smart, witty and accessible guide to the rewarding and joyful practice of improvisation; this book contains loads of great games and includes lots of ways to tell stories and create characters as well as tips on using improv to make theatre and comedy, from monologues to full-scale productions. It would be a great asset for both organizations and individual readers who want to discover how improv stimulates creativity and confidence in all areas of life. Comedian Phill Jupitus said of it: “In a world where imagination seems to be fighting a losing battle against technology, Alison Goldie has come up with a brilliant and easy to follow guide to putting people back in touch with this essential part of their creative minds... This book should be on the bloody national curriculum!”
Have a look here  to find out more on Alison Goldie’s own YouTube channel. And if quick-fire witty improv floats your boat, then you’ll enjoy this  – some of the funniest answers to Scenes We’d Like to See from Mock the Week! 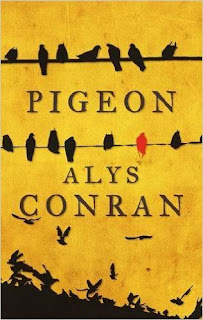 Congratulations to Pigeon, by the north Walian author and creative writing lecturer, Alys Conran published by Parthian; which is one of twelve titles which has just been longlisted for the for £30k Dylan Thomas Prize. The prize, in partnership with Swansea University, is awarded for "the best published" literary work in the English language, written by an author aged 39 or under, invoking the memory of Swansea-born writer, Dylan Thomas. Launched in 2006, the award credits itself as the largest literary prize in the world for young writers. This year’s longlist comprises six novels, four short story collections, and two volumes of poetry you can find out more here.  The shortlist of six books will be revealed at the end of March and then the winner will be announced on 10th May in the run up to International Dylan Thomas Day on 14th May. Pigeon (pb, £8.99, 978 1910901236) is the tragic, occasionally hilarious and ultimately intense story of a childhood friendship and how it's torn apart, a story of guilt, silence and the loss of innocence, and a story about the kind of love which may survive it all. It has a gorgeous cover, and has had great reviews: “Might have been authored by Faulkner... just as imaginatively capacious... pitch-perfect” New Welsh Review; “An exquisite novel by a great new writer” MJ Hyland; “Heartbreakingly beautiful… I didn’t want it to end.” 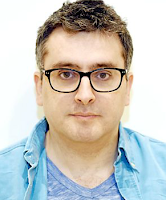 This is an interesting 15 minutes of listening; Daniel Hahn, a judge for this year's Man Booker International Prize, talking on Radio Four about what really makes a good book. 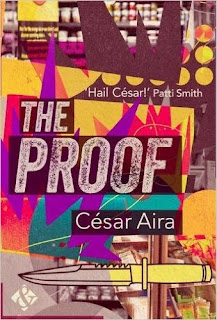 And Other Stories are getting some great subscriber reviews for César Aira’s new title, The Proof, which is published in April. “César Aira has "extreme eccentricity.... an aesthetic restlessness and a playful spirit" say @andothertweets and I couldn't agree more” writes Jeff Lyn, while Ian MacMillan tweets: “Very much enjoying this vivid rollercoaster of a book from @andothertweets superbly translated by Nick Caistor” and Kraken Reads posts “When this stunning book arrived from @andothertweets I couldn't resist diving right in. A surreal and dramatic read!” A playful take on youth culture, young love and ultra-violence on the streets of Buenos Aires from the cult contemporary writer who defies classification: The Proof begins with Marcia who is sixteen, overweight and unhappy. One day, as she's walking down a Buenos Aires street, she hears a shout: 'Wannafuck?' Startled, she turns round and is confronted by two punk girls Lenin and Mao. Soon, she's beguiled by them and the possibilities they open up. But the two have little time for a philosophical discussion of love: they need proof, and with their own savage logic the duo, calling themselves the Commando of Love, hold up a supermarket as the novel climaxes in an unforgettable splatter-fest finale. 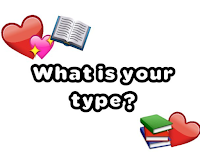 Up for a bit of #FridayFun and looking to find a #bookboyfriend? Take this quiz on BuzzFeed to find out which literary character you should date! I must say it was a little depressing to find out that in my case that would be Winnie the Pooh; but there you go, that’s quizzes for you. 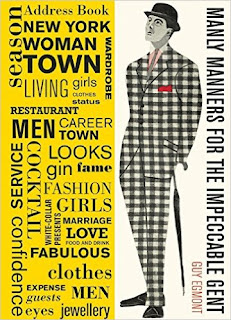 There’s a fun feature in GQ magazine this month featuring Manly Manners For The Impeccable Gent (£12.99, hb, 978 0859655453) by Guy Egmont – a Sixties style classic which has just been stylishly re-published by Plexus. An indispensable guide to gentlemen's etiquette in the 1960s, Manly Manners is filled with little-known secrets to help you get ahead in business, in society and in love. Whatever your dilemma - whether you're wishing to dissuade your wife from wearing those abominable white slacks or wondering how to excuse yourself from work for the day - you're sure to find the solution here. It provides guidance on everything from cigars to exiting the London Clinic discreetly and is a trove of advice for aspiring gents-about-town. Manly Manners remains as relevant today as ever, proving that good manners never go out of style. Have a look at the GQ piece here - it includes a link to a brilliant photo gallery of the most stylish 1960’s men to give you some inspiration!
And who were the top ten decade-defining movie stars of the 1960’s? Steve McQueen? Michael Caine? Have a watch here  and see if you agree. 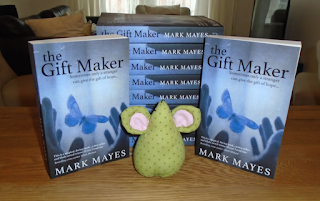 Late one night, Thomas Ruder receives a strange package: a small blue box. Another such item is delivered to his friend Liselotte Hauptmann. These 'gifts' will change their lives forever. In the far-off border town of Grenze, a play is to be performed and Reynard the impresario expects a very special audience. Thomas and Liselotte, together with their friend Johann, are drawn into Reynard's seductive web, as Daumen, the gift maker, must decide who his master really is. This is the strange and extraordinary world of Gift Maker by Mark Mayes (pb, £8.99, 978 1911331773) which is attracting 5-star reviews and a lot of positive buzz on the GoodReads website, with one reviewer saying “The Gift Maker is a magical fantasy novel like no other, and I loved it. To try and define the genre that this book fits into is incredibly difficult. It is a fantasy novel, but it is also a magical fairy tale alongside a story of good and evil and of creation. It's an exceptionally clever novel, that uses poetic language, in a world so unlike our own. And just look at the cover. It is so beautiful.” You can read more reviews here  – and btw the reviewers are right – it does have a gorgeous cover! It’s published at the end of this month by Urbane. 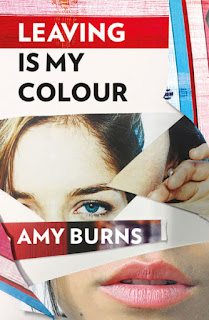 Great review in the Mail for Leaving is My Colour by Amy Burns: “Very funny, fizzing with one-liners and sparkling with a febrile wit.” Set in the southern US, this is a funny, smart, sassy and deeply moving account of a young woman’s disintegration and redemption. After her family becomes unexpectedly wealthy, Rachel, a witty, intelligent young woman, succumbs to drink, drugs and OCD, falling in and out of rehab and dysfunctional relationships. Leaving is My Colour follows her often hilarious, always bittersweet, attempts to make it back from the brink and reconnect with those she loves. “There’s nothing romantic about this darkly witty road trip through the bumpy highway of a young woman’s mind. Instead, it’s about the anti-romance of reconciling life and love, finding your place in an imperfect family, and the way our flaws are exposed and exploited by the people closest to us… if you want a book that is as honest, fractured and occasionally as hilarious as life itself; Leaving is My Colour will look good on you” wrote The List. Leaving is My Colour (pb, £9.99, 978 1911332237) has just been published by Freight. 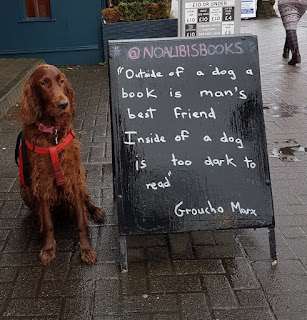