Happy Red Nose Day! I’m sure whatever the BBC comes up with this evening will be great – but personally I think the sketch below from the 2007 Comic Relief Night, featuring David Tennant and Catherine Tate is one of the funniest  ever. 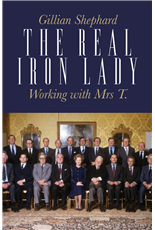 And sticking with the humour theme – or maybe not – what do you think it was like to work for Margaret Thatcher? There are so many myths about the extraordinary presence and political life of Margaret Thatcher, but now in The Real Iron Lady: Working with Mrs T. we can get to the facts. Gillian Shephard –  who herself served as a minister under Margaret  Thatcher – has brought together a group of  contributors with experience  of working with the  Iron Lady at all sorts of levels: members of her  Cabinets, such as Douglas Hurd and Tom King;  other MPs and peers; and people who had worked  for her in her  constituency, or behind the scenes at 10 Downing  Street.  The result is a revealing record of the way that ’s only female Prime Minister approached her job – her thoroughness, her extraordinary capacity for hard work, her rare ability to combine attention to detail with a grasp of strategic issues.  There are plenty of clashes – but there are also many acts of kindness and thoughtfulness. This is a unique insight into the working life of the real Iron Lady. 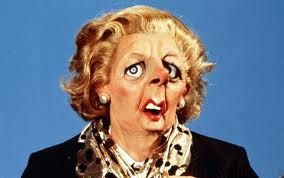 In the wake of the extraordinary success of the film The Iron Lady, the profile of this remarkable politician has not been higher since she retired from politics, and this hardback (which has just been published) is attracting a lot of media attention as you would expect. The Mail on Sunday will run the second serial this weekend; the author is at the Oxford Literary Festival 17th March and reviews will follow in the Guardian, Daily Telegraph, Independent on Sunday, Sunday Times, the Times, Daily Mail and the Spectator. Gillian Shephard is appearing on Channel 5 The Wright Stuff on 5th April and will do an interview with Radio 5 Live for the Richard Bacon Show 28th March.
Order The Real Iron Lady here

And for those booksellers too young to remember the reign of the ferric one – have a look at the Spitting Image sketch below which will give you a pretty accurate idea!

And if that’s given you a taste for a bit more, then how about Maggie’s version of I Did it My Way, which you can watch below! 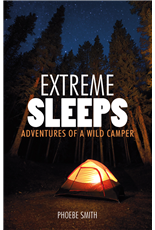 Phew, after that I think I need a bit of a lie down! But maybe I won’t choose to pop my pillow right on the edge of a cliff! However, this is exactly the sort of thing that Phoebe Smith, author of Extreme Sleeps: Adventure of a Wild Camper would do! As she writes in her very entertaining paperback, she becomes “addicted to what I called ‘extreme sleeping’ – a kind of addictive high-adrenaline sport – but rather than being defined by pushing the boundaries of physical activity, my particular pursuit was marked by a distinct lack of it.” Challenged by a cocky Australian in Woolloomooloo, veteran globe trotter Phoebe Smith sets out to prove that the extreme camping experiences available in the could rival anything found elsewhere in the world. In this sometimes scary, frequently funny and intriguing journey around the country, Phoebe attempts to discover and conquer its wildest places. From spending the night in the decaying wreckage of a World War Two bomber at Bleaklow to pitching next to the adrenaline-inducing sheer drops of ; Phoebe’s extreme sleeps change her perceptions of the great outdoors and teach her about herself along the way. The author is the editor of Wanderlust, an award-winning travel magazine with a circulation of 37,000 and this book would appeal to youthful fans of walking, hiking and camping. There will be reviews in national newspapers, travel magazines, camping/outdoor activities magazines; radio interviews and syndicated pieces in the regional press and you can order Extreme Sleeps here. 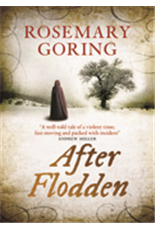 Now how about a cracking historical novel, set in the 16th century which will appeal to fans of Rose Tremain and Hilary Mantel? Andrew Miller, the Costa-winning author of Pure called it “A well-told tale of a violent time; fast-moving and packed with incident.” After Flodden by Rosemary Goring is a novel about the consequences of the battle of , as seen through the eyes of several characters who either had a hand in bringing the country to war, or were profoundly affected by the outcome. This year is the 500th anniversary of the Battle of Flodden, and this is an unputdownable story of political intrigue and romance and a vivid evocation of a violent, pitiless era. It’s a racy adventure, combining political intrigue and romance, and its readership will be anyone who loves historical fiction, or is interested in the history of and the turbulent, ungovernable borderlands between and . The author is an extremely well-known and respected journalist and we expect widespread reviews & features.
Order After Flodden here. 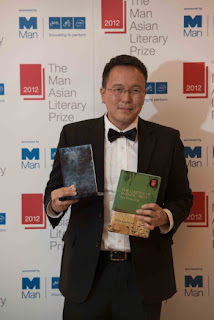 Well done to Tan Twan Eng, author of The Garden of Evening Mists (which you will remember was shortlisted for the Man Booker Prize 2012) who was announced this week as the winner of the 2012 Man Asian Literary Prize, becoming the first Malaysian author to win Asia’s most prestigious literary prize. This is only the second time the Man Asian Literary Prize has been won by a novel originally written in English. The novel, set during the aftermath of the Japanese occupation of , won the $30,000 award, from a shortlist of five books spanning the whole Asian continent. The other four shortlisted novels were: Between Clay and Dust by Musharraf Ali Farooqi (), The Briefcase by Hiromi Kawakami (), Silent House by Orhan Pamuk () and Narcopolis by Jeet Thayil (). Chair Judge, Dr Maya Jaggi, said, “I have experience of judging many literary awards. But our task as a jury was exceptionally difficult, as well as gratifying, because of the outstanding quality and originality of the novels in contention from across , and the strength of our shortlist. The winner, The Garden of Evening Mists by Tan Twan Eng, revisits the traumatic aftermath of the Japanese occupation of , and the post-war insurgency against British rule, with stylistic poise and probing intelligence. Taking its aesthetic cues from the artful deceptions of Japanese landscape gardening, it opens up a startling perspective on converging histories, using the feints and twists of fiction to explore its themes of personal and national honour; love and atonement; memory and forgetting; and the disturbing co-existence of cultural refinement and barbarism. The layering of historical periods is intricate, the descriptions of highland are richly evocative, and the characterisation is both dark and compelling. Guarding its mysteries until the very end, this is a novel of subtle power and redemptive grace.”

This title is available in paperback which you can order here and also as a special edition hardback slipcase. This edition is strictly limited to 1,200 copies, each is numbered, signed by the author and stamped in red with his personal Chinese seal. The high specification design includes a beautiful silver foil design; coloured endpapers; head and tail-bands and a ribbon marker. The cased book is individually shrink-wrapped and labelled with price, barcode, 'signed by the author', 'Limited Edition of 1,200 copies' and 'Shortlisted for the Man Booker Prize 2012 and you can order it here.

And finally, many congratulations to one of our Compass clients; Summersdale, who today were shortlisted for Independent Publisher of the Year in the 2013 Bookseller Industry Awards. Find out about all the awards and see the shortlists for all of the categories here.

That’s all for now folks, more next week!
Posted by Compass Rose at Friday, March 15, 2013