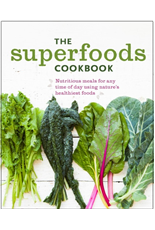 Apparently this weekend is the one where most of us fall off the wagon, and give up our diets. Well, a finished copy of The Superfood Cookbook by Dana Jacobi (978 0992625443) published by Emex has just arrived in the office – and it looks just the thing for helping us all stick to those New Year’s resolutions of eating properly. It is packed full of nutritious meals for any time of day using nature’s healthiest foods. The styling is very modern and contemporary, and it focuses on the core plant-based ingredients (vegetables, fruits, whole grains and legumes) that are the building blocks of healthy recipes. Emphasising easy meal planning, the recipes are organised by course: breakfast, mains, sides & snacks and desserts. The Superfoods Cookbook also includes stunning visual galleries of key ingredients showcasing the vast array of whole foods readily available in local markets, with descriptions that reveal health benefits and suggest how to prepare them. Special features throughout the book offer additional quick ideas for using superfoods, such as strawberries, kale, chillies, melons, butternut squash, and more, in easy meals or snacks. It is a really attractive large format paperback with terrific full colour photographs throughout, and you can find out more about the Superfoods Cookbook and order it here. 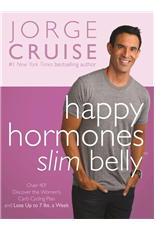 Something else that might just help is Happy Hormones, Slim Belly by Jorge Cruise; just published by Hay House (978 1401943295 ) This title is aimed specifically at women over 40, and is a new approach that goes against conventional wisdom of slashing calories and spending hours at the gym. It uses breakthrough science to confirm that cutting sugar for two days, then adding it back for five days, will keep your insulin low, which cuts belly fat, and your serotonin high, which makes you happy. Happy Hormones, Slim Belly is the perfect guide to balance your hormones, turn your metabolism to fat-burning mode, and get your mood soaring day after day. This title adapts the vogue for 5/2 diets into one of Jorge Cruise’s incredibly successful programmes – he is the author of three bestselling weight loss titles which have been translated into 15 languages with 5 million copies in print. Jorge’s title The Belly Fat Cure has been among the top-selling items for Hay House since its publication. If you need further encouragement then you can have a look at him in action on a US chat show here. This book seems to combine the two ideas which are most in vogue at present – i.e. cutting out foods for two days a week – and also seriously regulating your sugar intake – and not surprisingly it is getting a lot of publicity. It is excerpted in the Feb edition of Woman magazine (circ. 250,000), as well as Bella magazine (circ. 209,022) and the Sun in January (circ.2 million).
Order Happy Hormones Slim Belly here

And if your vice is not the dreaded doughnut but the secret ciggie – then none other then Richard Branson on his own website has some advice to offer – and hurrah, it’s to recommend some Compass titles– the massively bestselling Allen Carr series – published by Arcturus. Stop Smoking with Allen Carr (978-1-84858-997-1 £12.99 hardback & audio CD), Finally Free: The Easy Way to Stop Smoking for Women (£7.99 paperback 978-1-84858-979-7) and Stop Smoking Now Without Gaining Weight (£9.99 paperback & audio CD 978-1-84837-373-0) are three of the biggest sellers. To date Allen Carr’s books have sold in excess of 14 million copies in more than 35 different languages and over 50 countries across the globe, so don’t forget to have them in stock!

The Bluffer’s Guide to Etiquette (£6.99 paperback 978 1909937000) was featured in the Daily Mail this Thursday, and was also reviewed in the Financial Times under the heading “The polite way to put a sock in it".  This paperback has just been published, and is by William Hanson, who is considered by Sky News to be “the 's leading consultant in etiquette & protocol” and is widely regarded as the ’s freshest and most trusted authority on etiquette and protocol. His youth, coupled with his old-fashioned values, gives him credence to adjudicate on modern manners.
Find out more and order The Bluffer's Guide to Etiquette here

Coming in March are new paperbacks on two subjects which never seem to go out of date – and as every bookseller knows, there is a large army of nutters – sorry eager customers – just waiting to buy them.  Firstly, Tyrants: History's 100 Most Evil Despots & Dictators (9781782126966). This title from Arcturus by Nigel Cawthorne introduces one hundred of the most infamous and despised characters history has ever seen. Including familiar names as well as lesser-known and more recent examples, the most evil characters of history are profiled and analysed. You can order Tyrants here and of course we can’t pass by this great opportunity to watch some of the baddies profiled in action in one of the brilliant Epic Rap Battles - Stalin, Lenin, Putin – what more could you want!

And secondly, also from Arcturus, Crop Circles by Steve and Karen Alexander (£9.99 9781841934013). Through stunning photography and detailed analysis, this lavish, groundbreaking book explores the mysteries of crop circles around the world. This revised and updated edition reveals the latest in crop circle phenomena and is illustrated throughout with stunning colour and aerial photographs and claims to reveals the hidden secrets behind crop circles by two world authorities on the subject. You can order Crop Circles here. And whether or not you are a believer or a sceptic, I’m sure you will enjoy this crackpot – sorry highly scientific – video on the subject. 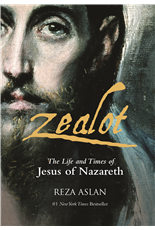 Zealot: the Life and Times of Jesus of Nazareth by Reza Aslan certainly attracted plenty of publicity when it came out in hardback last year, and in March it is published by Westbourne Press in paperback (9781908906298). The Telegraph said it was “A lean, fast-paced account of First Century , often revealing and always finely written, which attempts to locate Christ within his historical landscape.” Others called it “A bold, powerfully argued re-visioning of the most consequential life ever lived” and Publisher’s Weekly said “Compulsively readable and written at a popular level, this superb work is highly recommended.” Reza Aslan is an excellent self publicist – even going as far as to make a somewhat controversial video in order to sell his book this Christmas (shades of Life of Brian methinks) which you can watch here. Whether or not it was thanks to this bit of self promotion, the hardback has certainly sold very well – and you can order the paperback of Zealot here

As well as being a time for diets and self-sacrifice, January is also the time when many are  determined to make this the year they learn  to drive – and also when thousands of kids round the countries are staring to get seriously stressed about this summer’s exams. As someone who has both of these scenarios unfolding in my house; I will definitely be having a look at two little books from Summersdale; Driving Test Tips (9781849535380) by Andrew Adams and Exam Busting Tips (9781849535397) by Sam Morgan. These books of short, straightforward tips are highly useful for any student and previous editions have sold over 11,000 copies. Exam Tips identifies the most common stumbling blocks and is crammed with practical tips on how to overcome academic angst. It is the one-stop expert guide to co-ordinating revision and lifestyle during any exam period, no matter what level of education you are at and contains advice which is relevant to tackling all kinds of exams, from SATs to degrees.

Driving Test Tips has lots of these short, straightforward tips which make the book easily digestible and indispensible for the nervous learner driver. If you want an example of how not to drive, then have a look at how Mike Wasowski gets on in the hilarious Pixar short film Mike's New Car. Or for something a little more retro – but still extremely funny, have a listen to the classic Bob Newhart sketch from 1960.
You can order Driving Lesson Tips here;
And you can order Exam Busting Tips here 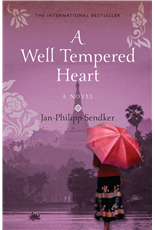 A Well Tempered Heart by Jan-Philipp Sendker is published by Birlinn in March, (9781846972850) and is the follow-up to the international best-selling novel The Art of Hearing Heartbeats which was selected as one of Amazon’s Rising Stars in spring 2013 and has sold 10,000 copies in the UK to date. The Art of Hearing Heartbeats has sold over 200,000 copies in the and Jan Philipp Sendker’s vivid and evocative prose has won praise from critics and readers all over the world. In this new novel, almost ten years have passed since Julia Win came back from , her father’s native country. Though she is a successful lawyer, her private life is at a crossroads; her boyfriend recently left her, she has suffered a miscarriage, and she is, despite her wealth, unhappy with her professional life. Julia is lost and exhausted. One day, in the middle of an important business meeting, she hears a stranger’s voice in her head starting to ask questions Julia has been trying to avoid. Why do you live alone? To whom do you feel close? What do you want in life? Interwoven with Julia’s story is that of a Burmese woman who finds her world turned upside down when Burma goes to war and calls on her two young sons to be child soldiers. This spirited novel, like The Art of Hearing Heartbeats, explores the most inspiring and passionate terrain: the human heart. Order A Well Tempered Heart here

It’s always extremely satisfying when a film based on a book does well, as it inevitably leads customers back onto the bookshops to seek out the original title – and of course the multi Oscar nominated 12 Years a Slave is no exception – the Hesperus edition of this searing classic (978-1843914716) is outselling the Penguin film tie- in edition in many shops. And whatever you may think of the recent adaptations of The Hobbit and Sherlock, there’s no denying that Tolkien’s and Conan Doyle’s words remain as good as ever.

There’s always room for a good spoof however, and perhaps this alternative ending for the Desolation of Smaug might entertain you?

Or what about this hilariously operatic version of Sherlock as a musical!

Talking of musicals, I still love this very funny combination of Sherlock, Doctor who and the sublime lyrics of Irving Berlin!

This newsletter is sent weekly to over 600 booksellers, publishers and publicists. If you would like to order any of the titles mentioned, then please click here to go to the Compass New Titles Website or talk to your Compass Sales representative.
Posted by Compass Rose at Friday, January 17, 2014