Compass Points is back this week after a short holiday, and if you’d like to take a look at all the fabulous new titles coming up in June you can now view them on the new titles website here.

Happy Easter - and hope the chocolate bouncing one brings you everything you desire on Sunday! If Easter can’t come soon enough as far as you’re concerned, then take a look at this Walt Disney cartoon from 1934 – six minutes of innocent nostalgic fun!

Or if you prefer your Easter fun a little less sweet and innocent, then how about this funny clip of one of the many nutters on the streets of New York... 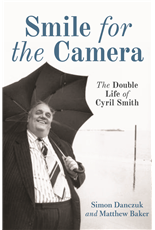 The discussions about inappropriate behaviour by MPs in the “palace of sexminster” rumble on this week – and no public figure looms larger in this topic than the late Cyril Smith. Smile for the Camera: The Double Life of Cyril Smith by Simon Danczuk and Matthew Baker has just been published by Biteback (Hb, 978 1849546447 £16.99) and its two authors were on BBC Radio 4’s Today programme  earlier this week to talk about the book with John Humphries. Simon Danczuk (the Labour MP for Rochdale) was also on the Jeremy Vine show on BBC Radio 2 today (in fact I’m listening to him as I write this – how abut that for hot off the press!) discussing the book. He alleges that Liberal MP Sir Cyril Smith was part of a high-level paedophile ring operating at in the 1970s, and used his influence to escape prosecution for sexually abusing boys. He told the programme that the MP was part of an "informal" network of sex abusers and he claimed police were pressured by the authorities to drop investigations into his activities. "Had he been prosecuted, then the house of cards would have fallen, in terms of that paedophile network, and it could have brought the government down," the Labour MP told the Today Programme. He also claimed child abuse allegations against Sir Cyril were widely known at the time and were even raised in public, at a Liberal party conference. Pretty strong stuff – you can read more on the BBC politics page here. Cyril Smith retired from politics in 1992 and died in his sleep in 2010. Many of his victims later committed suicide or drifted into a life of drug abuse or prison. Smile for the Camera is a deeply troubling story of a truly shocking abuse of power, and asks urgent questions of those who allowed Smith to get away with it. There is bound to be further media interest in this dark tale and you can find out more and order Smile for the Camera here. 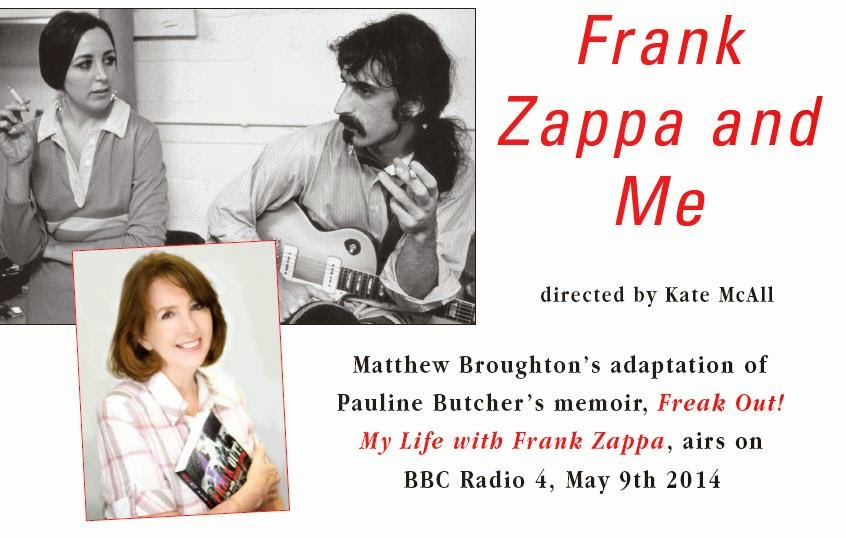 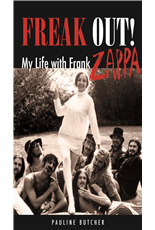 In 1967, while working in , Pauline Butcher, a straight English girl, met the unconventional, avant-garde rock star, Frank Zappa, while he was on a trip to promote the Mothers of Invention’s first concert at the Albert Hall. He asked her to type the lyrics of his second album, Absolutely Free. Unable to understand the strange words, Pauline made up her own, much to Frank Zappa’s amusement. And so these two unlikely minds found a rapport that took Pauline to , where she lived and worked in Zappa’s house amid an entourage of musicians, freaks and other rock stars. Freak Out! My Life with Frank Zappa was written by Pauline in her sixties, based on the letters she wrote to her parents, who lovingly kept them in a shoe box for 40 years. It is published by Plexus (paperback original, 230 x 155mm, 320 pages, illustrated with 40 photographs, 978 0859654791 £14.99). Now Matthew Broughton has adapted the book into a 45-minute afternoon play entitled Frank Zappa and Me, directed by Kate McCall, which will air on BBC Radio 4 on May 9th. This highly entertaining play follows Pauline’s relationship with Frank: from their shaky seduction scene to Pauline’s shock and dismay at living in a decrepit log cabin and a gunman who threatens to shoot Frank. Slowly, Pauline adopts the Californian laissez-faire lifestyle and with the help of Women’s Liberation learns to counter Frank’s influence and find her own way. This is a great story – and the play is certain to create demand for the book.  There will be plenty of publicity – the BBC love to promote their own productions, and so Pauline will be interviewed on BBC Radio London promoting the play later this week and excitingly Libby Purvis on Radio 4 Midweek will be interviewing her next Wednesday. It’s also highly likely she will be on Women’s Hour and Saturday Live.
You can order Freak Out! My Life With Frank Zappa and find out more here

For those not familiar with the musical oeuvre of Frank Vincent Zappa (1940-1993) here he is at the Roxy Theatre in Hollywood in 1973. Pretty different to the big rock and pop concerts of today – can’t quite imagine Rihanna and her entourage just wandering onto the stage while tuning up and chatting to the audience!

Who are the Brain Police? was one of the most popular songs from Frank’s album Freak Out – and is perhaps not a bad question to ask ourselves today. Apparently, the theme tune of your life is the song that was number one in the charts on your 14th birthday. Mine’s Stayin’ Alive – yep, that seems appropriate enough; why not play this fun game to find out yours here –   and then you can listen to them too – hours and hours of time-wasting pleasure! 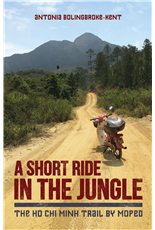 In spring 2013, adventurer Antonia Bolingbroke-Kent saddled up alone on her pink Honda C90 moped and set oﬀ from the cacophonous streets of . From there she rode an epic 3,000 km through mud, deep sand, rivers and jungle on the Ho Chi Minh Trail through , and . Travelling with very little mechanical know-how, Antonia visited lost pre-Khmer ruins, met remote tribes in Laos, battled along Cambodia’s Mondulkiri Death Highway, and encountered some of the countless unexploded bombs that remain from the Vietnam War, seeing both beauty and great danger. A Short Ride in the Jungle: The Ho Chi Minh Trail by Moped by Antonia Bolingbroke-Kent has just been published by Summersdale, (pb, 978 1849535434 £8.99) and is getting quite a bit of coverage in the adventure magazines as well as on the radio. BBC Radio 4 interviewed Antonia on Saturday Live about the book and her journey last week. Motorcycle Monthly will be running an extract as will Overland Magazine (which is a really nice, well produced glossy magazine for adventure bikers) and also Wanderlust Magazine (circ. 37,500). Traversing this particular trail by motorbike has become very popular in the last decade (exemplified by Top Gear’s Vietnam special) and Antonia’s bike, the Honda C90, is a favourite of motorbike fans with millions of devotees the world over – so there should be plenty of takers for this title.
You can order A Short Ride in the Jungle here

If (like me) you’ve never even heard of the Ho Chi Minh trail – then there is a really good three minute video about it on YouTube which you can watch here. I recommend it! 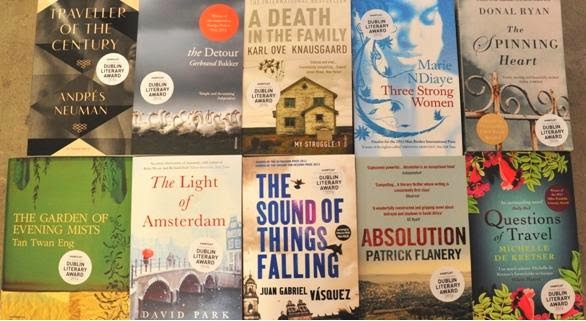 The shortlist has just been announced for the 2014 International IMPAC Literary Award and hurrah, The Garden of Evening Mists by Tan Twang Eng is on it! You can see all ten titles on the shortlist here. The list includes five novels in translation from , , , , and The Netherlands and novels from , , , the and the . The IMPAC Dublin Literary Award, an initiative of Dublin City Council, is worth £100,000 to the winner and is the world’s most valuable annual literary award for a single work of fiction published in English. This Award is just of the many annual events that earned its UNESCO City of Literature status. The titles on this year’s shortlist were nominated by public libraries in , , , , , , , and The Netherlands. The five member international judging panel will select one winner which will be announced by the Lord Mayor of and Patron of the Award, Oisín Quinn on Thursday 12th June in a morning announcement. The Garden of Evening Mists is published by Myrmidon and is available in hardback; 978 1905802494 £18.99 – we have signed copies and first editions available – talk to your Compass sales rep for details.

Emma Woolf is making quite a name for herself in the media. As well as being a columnist for the Times, Newsweek and The Daily Beast she is the presenter on Channel 4's Supersize vs. Superskinny. She has recently written several major features in Top Santé and Psychologies magazines – both of which have huge circulations.

So don’t forget her two books, both published by Summersdale: An Apple a Day: A Memoir of Love and Recovery from Anorexia (pb, £8.99 978 1849532495); and the newest title The Ministry of Thin: How the Pursuit of Perfection Got Out of Control (pb, £8.99 978 1849534123). Sadly the whole topic of anorexia in young women is not going to disappear from the media any time soon – and Emma is fast becoming the expert that the press, radio and TV turn to when they want to feature this topic. Her two books have had rave reviews – so keep them on display. 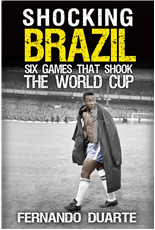 Who’s already counting down to the first game of the footie World Cup? Thursday 12 June; v. if you’re interested. Shocking : Six Games that Shook the World Cup by Fernando Duarte is one of the many many footie titles that will be coming out in June – but I can assure you it’s one of the best! And this is not just my entirely unbiased option - the Financial Times have selected it as one of just three books they are reviewing for the World Cup and better still, the Guardian will serialise it over two days one week before publication (which is the 5th June). It will be flagged on the front page on their Sports section, the front page of the Football section, and will be bannered on the Guardian website – which is the most read news site in the . When you think of Brazilian football you probably call to mind Pele; the 1970 World Cup Team; the Beautiful Game. Brazilian football has become synonymous with excellence that seems to resist the usual dry spells –not for them the almost fifty years of hurt endured by fans. Supporters from every part of the globe are able to recount joyful tales about 's unmatched achievements, especially the ones related to World Cup glory. But the most crucial transformation undergone by Brazilian football was a direct result of the Selecao failures. Shocking Brazil focuses on six crucial World Cup defeats that radically altered Brazilian football and which had repercussions far beyond the sport. These games hid narratives of racism, corruption, authoritarianism, corporate power and greed. Fernando Duarte uses anecdotes, data and observation to show Brazilian football in a completely different light, one that will surprise many, and spark debate and discussion. As prepare to welcome the world as hosts of FIFA's 2014 World Cup, 64 years after the country first received the tournament, there hasn't been a more appropriate time to turn on the floodlights to the secret of 's success. This trade paperback (978 1909715165 £12.99) is published in June by Arena Sport.
Order Shocking Brazil here

And oh alright then, if you fancy whiling away another 15 minutes admiring all 1283 of Pele’s goals then you can watch every one of them here!

This blog is read weekly by over 700 booksellers as well as publishers and publicists. If you would like to order any of the titles mentioned, then please click here to go to the Compass New Titles Website or talk to your Compass Sales representative.
Posted by Compass Rose at Thursday, April 17, 2014