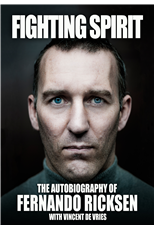 Wow – you guys are doing really well with the autobiography of Andrea Pirlo: I Think Therefore I Play, which is selling like a … well like a super-fast footballer bearing down on an open goal. If you haven’t ordered it or would like more copies, then you can find out more here. If you liked that one, then you are sure to like this; Fighting Spirit (hb, 978 1909715202 £16.99) which is the authorised autobiography of Dutch midfielder and former Rangers and Zenit St Petersburg star Fernando Ricksen. As well as revealing insights into his time at Rangers, and with the Dutch national team, Ricksen reveals secrets of the high life of a celebrity footballer, his battle with alcohol and drug addictions and now with motor neuron disease. Fernando Ricksen is a fighter. As a footballer, Ricksen carved out a fearsome reputation for Rangers, Zenit St Petersburg and . His aggressive approach won him hero status among the Rangers fans, and after leaving the club he established as wild a reputation in as he had in . Ricksen was diagnosed with motor neurone disease in 2013, and in Fighting Spirit he candidly reveals his extraordinary life story and his battle with the disease. Fighting Spirit is a rollercoaster journey of football, alcohol, drugs, sex, violence and corruption. The book is co-written by Vincent de Vries who is a freelance journalist for Panorama and many publications.
Fighting Spirit is published by Arena Sport in June and you can order it and find out more here.

Here he is making an emotional return to Ibrox. 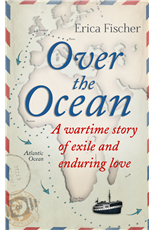 Over the Ocean: A Wartime Story of Exile and Enduring Love by Erica Fischer is an amazingly crafted biography that reads like a novel. In July 1940, Erich Fischer found himself in Liverpool being herded onto a British transport ship bound for , along with 2,500 other men. Conditions on board were horrific, with men locked below decks with overflowing latrines and only seawater to clean themselves. Separated from family, friends and removed from any semblance of a normal life, Erich is unsure whether he will ever see wife and child again. Erica Fischer’s Over the Ocean tells the extraordinary story of her own parents and at the same time sheds light on a little-known and little-discussed chapter in British history. It is an astonishing true tale dealing with an unexposed and unexplored period in British history but also a story of the resilience of love. Over the Ocean is translated by Andrew Brown, and had rave reviews when it was published in . There is a huge amount of interest at present in these true stories from the Second (and First) World Wars, with many of us keen to find out more about the times that have shaped our lives today.  It is published by Hesperus Nova (PB 978 1843915041 9.99) in June.
Order Over the Ocean and find out more here 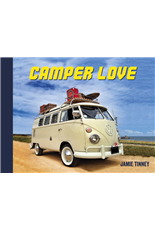 The venerable VW has graced our roads since 1950 and its popularity, above all other campervans, has never faded. Bursting with beautiful photography, Camper Love by Jamie Tinney is fantastic celebration of the coolest van on earth. This £12.99 handsome hardback is the perfect gift for all VW owners, and those who aspire to be in possession of one. I bet everyone reading this knows at least one person who has a VW camper can – or someone who is constantly dreaming and fantasising about getting one! The current interest in all things retro has led to a new generation exploring the freedoms offered by the VW campervan; and Camper Love is the perfect book for anyone who wants to share the obsession! Camper Love is published by Summersdale (hb, 978 1849535922 £12.99) and you can find out more and order it here.

As you can imagine, YouTube is absolutely full to bursting of with sad nutters – sorry keen aficionados – who are only too happy to share their somewhat fanatical infatuation. However, much more entertaining I feel is this little one minute film showing how to build your own Lego camper van – now this is much more like it – I want one now!! 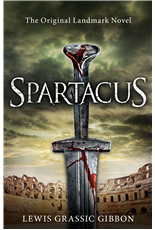 Who has been to see Noah? Nope, me neither. How about ? Who’s watching Game of Thrones – ahh that’s more like it. Whatever your preference, there is no doubt that we are currently in the grip of a massive enthusiasm for violent, sexy swords and sandals epics. Why is that I wonder; is it because our day to day lives are so mundane and dull? Of all these dramatic stories; Spartacus was one of the original and best. Possibly best known for the 1960 American epic film directed by Stanley Kubrick and starring Kirk Douglas, Laurence Olivier  and Tony Curtis; Spartacus (pb, 978 1843915096 8.99) by Lewis Grassic Gibbon is published in a brand new edition in June . Just to remind yourselves, you can see the iconic clip from this great film here. The story is a cracking one, often heralded as one of the great historical novels of the twentieth century. It starts in , 73 BC when Kleon, a Greek slave, wakes early, cuts his master’s throat, and flees south by a back road, clutching a copy of Plato’s Republic. His destination is , where he hopes to join the burgeoning rebel army of Spartacus, an escaped gladiator. Spartacus and his companions, having burst out of the ludus where they were held, defeated every Roman force sent against them, are plundering the countryside and gathering to their ranks thousands of fugitives, brigands and itinerants. They seek to create a new world, one where men are not owner and owned. But they must first escape , and the vengeful Roman legions already marshalling against them. Brutal and uncompromising in its depiction of the ancient world, Spartacus masterfully evokes the violence, hope and despair of the war that shook to its very foundations. It is full of adventure, suspense, cruelty and romantic intrigue and this brand new edition from Hesperus is the only mainstream print edition available.
Order Spartacus and find out more here. 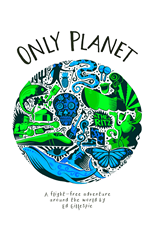 Only Planet: A Fight Free Adventure Around the World is an inspirational tale of one man’s desire to takes anything but a plane to circumnavigate the world. Ed Gillespie trained as a marine biologist, and soon concluded that he was going to spend the rest of his life saying “if you don’t stop catching all the fish, there won’t be any fish”. So he co-founded Futerra, a communications company with a mission to make sustainable development so desirable it becomes normal. Only Planet is an inspirational tale of global adventure illustrated with dramatic photography and Ed’s journey takes everything from cargo ships to camels; hitchhiking to hovercrafts; and brings to vivid life the joys, and challenges, of slow, low carbon, overland travel. En route Ed realises that staying grounded in an age of climate change may lead us to rediscover the pleasures of what real travel is all about, reconnecting community and our one and only lonely planet. Only Planet by Ed Gillespie (hb, 978 0957157385, 14.99) is published by Wild Things Publishing in June. You can find out more and order Only Planet here 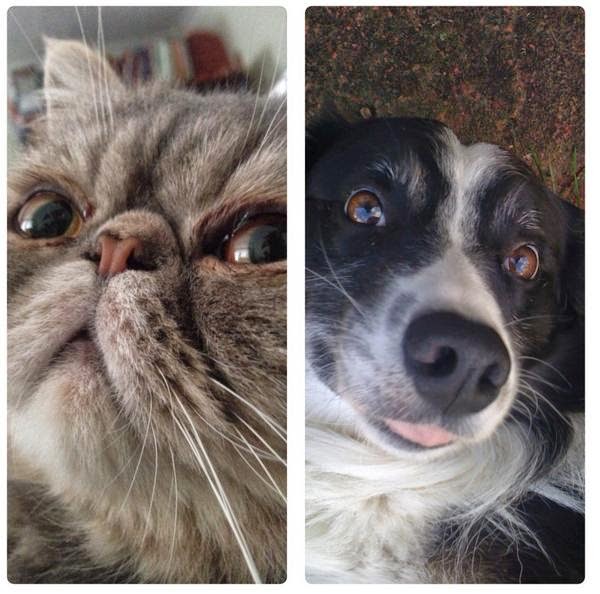 Who thinks they have the cutest funniest cat or dog ever? All of you? Well, this time I’m not going to direct you to endless wacky YouTube clips of ever more hilarious pet antics – but instead I give you a chance to win £100 in cash – and have your pet star in a book!! Yes – a real printed paper book – so much better than all that virtual nonsense! Summersdale are publishing Cat Selfies and Dog Selfies in October 2014 – and they need photos! Hang on a minute – you mean some dogs can actually take selfies? No, don’t be daft that would be very silly indeed – they just have to look as if they are. So if you have a cute, crazy or hilarious photo of your dog or cat looking like they’re taking a selfie; simply send it to Summersdale. All you have to do is send the snap (as high-res as possible, please) to auntie@summersdale.com with your name, your pet’s name and your contact details. There will be a £100 cash prize for the best photo in each book, plus £25 worth of Summersdale books for every contributor featured in each book. We’ll also be sending every successful entrant a copy of the book their pet is in – that’s your very own copy – not just one to sell in your bookshop you muppet! Summersdale are certain these books are going to be big bestsellers for Xmas 2014 – so get your photos in now!
Enter the Summersdale Cat and Dog Selfie Competition here! 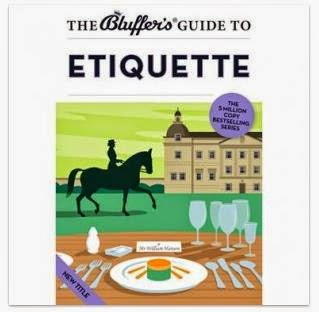 The Bluffer’s Guide to Etiquette (pb, £6.99 978 1909937) by etiquette expert William Hanson is getting lots of nice mentions in various media. Metro newspaper called it the “handbook of social climbing “and says that “thanks to the popularity of Kate Middleton and the stars of Downton Abbey, it’s cool to be posh!” William Hanson would rather call if “cool to behave appropriately” – but the depressing fact is that in the face of the sort of chronic bad manners we see every day all around us; there is a genuine need for this title! 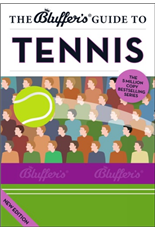 The excellent Bluffer’s website gives us all sorts of helpful info – including  this bluffer's guide to the week's best tweets so now we don’t have to waste any more time on social media do we – and can focus all of our efforts on selling more books! Genius!

This blog is read weekly by over 700 booksellers as well as publishers and publicists. If you would like to order any of the titles mentioned, then please click here to go to the Compass New Titles Website or talk to your Compass Sales representative.
Posted by Compass Rose at Friday, May 02, 2014