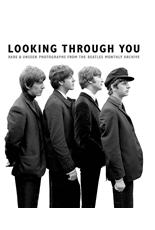 I am very much looking forward to seeing a copy of Looking Through You: Rare and Unseen Photographs from The Beatles Monthly Archive by Tom Adams, (hb £39.95 978 1783058679) which is from a publisher new to the Compass team: Omnibus Press. This is a  unique and original colour and black and white photographic record preserving many important moments within the Beatles’ career and providing fabulous glimpse into the world’s greatest ever entertainment phenomenon. It’s published as a beautiful limited (3000 copy) slipcase edition which includes a facsimile of a calendar from 1964. In 1963, it was highly unusual for a pop group to have a monthly magazine devoted exclusively to their career and only Elvis Presley had been considered important enough to warrant such an honour. One of the first people to astutely recognise their greatness was editor Sean O’Mahony and the monthly magazine he launched with the full blessing of The Beatles and their manager Brian Epstein was called The Beatles Book Monthly.  Looking Through You presents a selection of over 300 images from the precious Beatles Book Monthly photo archive, many of which have never been published before. Looking Through You also tells the story of this regular Beatle bulletin. I’d certainly never heard of it before – but The Beatles Book Monthly ran for six years, and with each new issue, fans worldwide would voraciously devour the contents, discovering the Fab Four’s latest news and activities and most of all, savouring the exclusive photographs, captured by its in-house photographer, Leslie Bryce. The Beatles Book Monthly captured the Beatles’ development from British provincial theatres – through foreign tours including their ground-breaking first American visit – and onwards to the band’s withdrawal into the recording studio. Not surprisingly there is a lot of media interest in this title, and it has already been featured in the Sunday Mirror Magazine and the August issue of NME and there will be lots more coverage to come. There is a dedicated Facebook page for Looking Through You – have a look – you can view lots of the terrific pics, and I think there will be plenty of customers for this handsome hardback – going right up to Christmas. This is not one of those make-a-quick-buck bodged together photographic coffee table books – this is the real deal.
You can find out more and order it here

And here are the Fab Four themselves – with that 1965 hit. 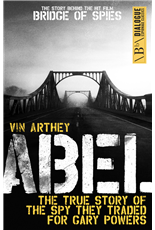 On 10 February 1962, Gary Powers, the American pilot whose U-2 spy plane was shot down in Soviet airspace, was brought to Berlin’s Glienicke Bridge, where he was to take part in the most famous prisoner exchange in history. The man Powers was traded for was one Colonel Rudolf Abel, a cover name for KGB Colonel Vilyam Fisher, one of the most extraordinary characters in the history of the Cold War. Abel was born plain Willie Fisher in Newcastle-upon Tyne, son to revolutionary parents who fled tsarist oppression in Russia. Arriving in the newly formed Soviet Union in 1921, Fisher was trained as a spy and eventually sent to New York, where, posing as an artist, he ran the network that purloined America’s atomic secrets. In 1957, his luck ran out and he was arrested and sentenced to thirty years in prison. Six years later, the USSR’s regard for Fisher was evidenced when they insisted on swapping him for the stricken Powers. This is a truly amazing story – and is about to come to cinemas as the new Steven Spielberg film Bridge of Spies starring Tom Hanks and Mark Rylance – so it’s going to be BIG! You can watch a trailer for it here. The book it’s based on is Abel: The True Story of the Spy they Traded for Gary Powers by Vin Arthey. Abel is a singular and absorbing true story of Cold War espionage to rival anything in fiction, moving from the most unlikely of beginnings in Newcastle, to Moscow and beyond to the streets of New York, where the final trade was negotiated by New York lawyer James Donovan.  Abel: The True Story of the Spy they Traded for Gary Powers by Vin Arthey (pb, 9781849549691, £9.99) is published in October (the film opens on 6 November in the UK) by Biteback and you can find out more and order it here

And still on the topic of the Cold War of yesteryear The Oligarch by Joseph Clyde (pb, 9781908096715) is a “well-paced thriller with a refreshing sense of realism” according to the Standard and “skilfully exploited the clash between the old and the clichés about Russia to give us an intelligent thriller” The Times.  You can find out more and order it here! 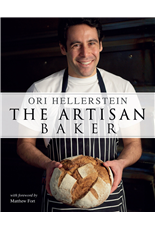 Who's watching Bake Off ? Everyone loved last week's bread week – and I would have been happy to munch on any of the creations dished up by the contestants – especially that extraordinary lion! Talking of fierce creatures, Paul Hollywood seems to be getting more acerbic every series – but even he couldn’t summon up too many of his sarky comments on that! However, we definitely mustn’t let him getting any bigger in his boots – it’s surely time for another baker on the block – and that person could well be Ori Hellerstein! Artisan Baker (hb, 978 1859063965, £14.99) is published by Connections in October and is packed full of delicious recipes for passionate home bakers. Ori Hellerstein is a professionally trained pastry chef, and in 2012 he fulfilled his dream of opening The Artisan Baker in the heart of the Cotswolds, where he runs baking master-classes as well as hand-crafting exquisite artisan breads, cakes and confectionery. This full colour hardback is packed with his own mouth-watering tried-and-tested recipes which are easy-to-follow and packed full of flavour, from a textured wild-rice loaf and aubergine & feta triangles, to decadent Nutella brioches and date baklava! His delicious creations bring an international twist to old classics, while his signature bakes – firm favourites at his own bakery – will have you coming back for more. With insider tips on using professional techniques at home, plus advice on store-cupboard essentials and making the most of local ingredients, now you too can discover how to become an artisan baker! Artisan Baker includes a foreword by renowned food critic Matthew Fort and you can find out more and order it here! 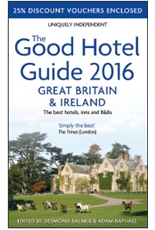 The Good Hotel Guide 2016 by Desmond Balmer and Adam Raphael (pb, £20.00, 978 0993248405) is published in October – as the Times says this is “Britain’s leading independent hotel guidebook” and according to the Mail on Sunday: “The one guide that offers a sense of what a place is really like”. This paperback has 672 pages, is full colour throughout includes11 pages colour maps and there are discount vouchers worth £150 included in every copy. The Good Hotel Guide is totally independent; and accepts no payment, advertising or hospitality from the hotels it lists. It includes good-value B&Bs, smart city boutique hotels, and elegant country house hotels and in total contains 825 selected hotels in Great Britain and 75 in Ireland ranging from those that are great value and child and dog-friendly to the boutique and romantic . It is undoubtedly the market leader: “Number 1 of the guides that take no freebies” says the Guardian – so make sure you’re stocking the 2016 edition – you can order it here!

And this is my annual cue to show a little clip for a hotel that certainly isn’t listed – that gem on the English Riveriera – full of satisfied customers! 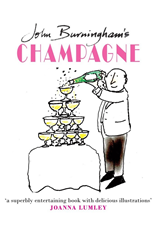 We finish with something rather special – John Burningham's Champagne. This is a book of pure loveliness, as cheering and restorative as a glass of fizz itself. It is an album, a scrapbook, a potted history and a celebration all rolled into one by the creator of some of our best loved books for children, also a connoisseur of the 'King of Wines' and how it makes us feel. John Burningham has created a beautiful book of 184 pages, combining his own matchless illustrations with photographs, clippings, menus and ephemera that help us relive a sequence of 'champagne moments'. The cast of characters includes Napoleon, Mark Twain, Oscar Wilde, Noel Coward, Bette Davis, Marilyn Monroe, Larry Hagman, John Betjeman, Jay-Z and those amazingly long-lived matriarchs of fizz, Mesdames Clicquot, Pommery and Bollinger. It is a handsome looking hardback (276 x 216mm) absolutely ideal as a gift – and full to the brim with an enchanting mix of colour drawings and photographs – as Joanna Lumley calls it in her introduction:  “a superbly entertaining book with delicious illustrations” John has previously produced a series of highly distinctive books for adult readers including John Burningham's England (1992) and John Burningham's France (1998). This new title is as original, and beautiful as any he's ever created, and, like its predecessors, it is born of personal experience and infectious enthusiasm. When you see your Compass Sales Manager ask them to show you the proof pages we have for this book and I promise you will be seduced – it really is charming – even for those of us whose budgets run more to cheap cava than the real stuff! John Burningham's Champagne (hb, £25.00, 978 0993386206) is published in October by LochAwe Books and you can order it here.

This gorgeous book is full of photos of sparkling cinematic champagne moments – but here’s one of my favourites – The Night They Invented Champagne from Gigi.

And finally – we love this chart from Waterstone’s giving the pros and cons of lending your books! 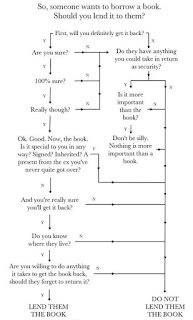 This blog is taken from a newsletter which is sent weekly to over 700 booksellers as well as publishers and publicists. If you would like to order any of the titles mentioned, then please click here to go to the Compass New Titles Website or talk to your Compass Sales representative.