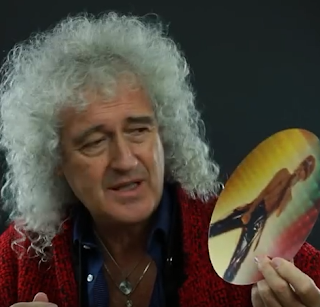 Things are really hotting up for the release of Queen in 3-D by Brian May which is published by the London Stereoscopic Company on 25 May. There is a fab piece about the book on the Classic Rock website here. Over on social media, fans are getting very excited about a teaser video released by Brian May talking about the title, which you can watch here.  The book is under a strict embargo until 21st May and the Sunday Times Magazine have secured first serial rights and the first interview with Brian on the book which they will publish it as a front cover story. This will be bannered on the front of main paper and advertised on the radio. Mojo magazine has been granted an exclusive interview with Brian to come out in the issue to come out just after publication date and following this there is likely to be massive syndication, press and media interest! 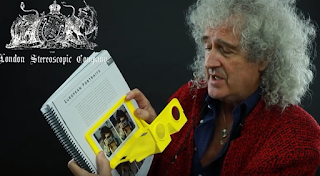 With excellent timing (wow, it’s almost like he planned it!) Brian has just released a new single with Kerry Ellis (from a new album Golden Days) entitled Roll With Me which is getting massive airplay on the BBC – you can listen to that here.  At the start of this year Queen announced a tour and possible new album – see a teaser for that news here. All in all, there is going to be a whole lotta Queen/Brian May publicity going on – so do make sure you have ordered plenty of copies of Queen in 3-D (978 0957424685, £50, 323 x 245mm) which is published as a slipcase containing the 256-page full colour deluxe hardback and the easily assembled patent 3D viewer known as the OWL. For more information on this mega book, go to the special website www.queenin3-d.com 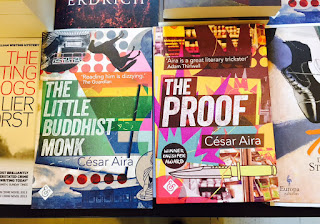 As one Tweeter said recently, “If there are any writers that make you put all other reading plans on hold, it’s César Aira. Another @andothertweets triumph” and his two new novellas The Proof (pb, £7.99, 978 1908276964) and The Little Buddhist Monk (pb, £7.99, 978 1908276988) both translated by Nick Caistor have just been published by And Other Stories to much acclaim. “César Aira is a master of the supernatural…all his novellas have a challenging philosophical core — yet they seem effortlessly produced and are fun to read” said Louis Amis in an outstanding Spectator review which you can read here .


There have been some fab displays recently for these and other And Other Stories titles all around the country – see above and below for those in Foyles, Waterstone’s Guilford, Burley Fisher Books, the Lutyens and Rubenstein Bookshop and Waterstones Norwich. Thanks guys! 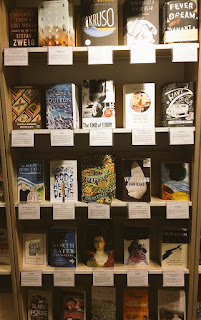 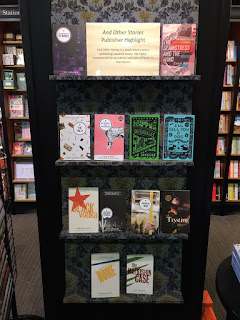 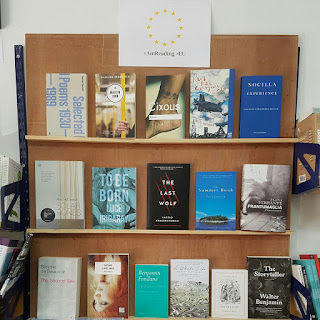 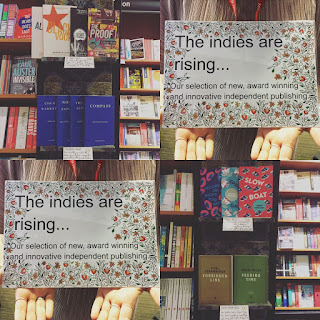 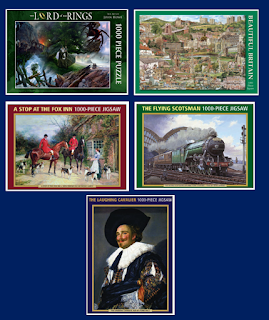 Fill in the missing word in this headline: “*** have now became the latest warriors in the battle against the digital revolution.” Any guesses? The answer is jigsaw puzzles – and so strong is their resurgence that they have for the first time been included in the UK’s official shopping basket, as researchers for the Consumer Price Index found that retailers are freeing up more space on their shelves for the puzzles. At John Lewis, jigsaw sales have risen by 16% this year, while the jigsaws and games category at the National Gallery gift shop is 49% up. Vinyl, premium stationery and (hurrah!) physical books are the most significant examples of this rediscovered taste for the tangible, but jigsaw puzzles are very much riding on the crest of the same wave; you can read more about this story in the Telegraph here. So, this is a good time to remind you of the bestselling puzzles from Peony Press and Galileo – and urge you to order them! From Peony, (which is an imprint of Anness) the top three sellers are three high-quality 1,000-piece puzzles, all priced at £12.99 which feature The Laughing Cavalier (978 0754825272,) The Flying Scotsman (978 0754833536) and A Stop at the Fox Inn (978 0754833529). From Galileo, the top sellers are puzzles showing scenes from The Lord of the Rings (700 461754725, £14.99) and a compilation collage entitled Beautiful Britain (702 811645912, £10.99). The Lord of the Rings puzzle is illustrated by John Howe who is widely recognised as the premier artist interpreting JRR Tolkien’s masterpiece He has painted book covers, calendars, board games, posters and was the art advisor on all Peter Jackson’s highly successful movies. In Beautiful Britain, all the scenes in the picture are painted from actual locations and the place names of the parts of Britain that have been illustrated are on the back of the box.
How long would it take to do these jigsaws do you think? An afternoon or two maybe? How about tackling one that takes an astonishing NINE MONTHS?! Luckily it only takes two and a half minutes to watch it – have a look at this 33,600-piece epic endeavour! 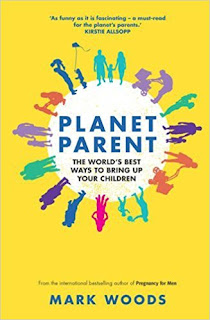 Who are the best parents in the world? And what are their secrets? From morning sickness to tricky teenagers, fussy eaters to iPad addicts, the core challenges facing parents are the same all over the world – but how each country deals with them is astonishingly different. In Planet Parent: The World’s Best Ways to Bring up your Children (pb, £10.99, 978 1908281807) Mark Woods looks in every corner of the globe to find the very best parenting tips and techniques. He gets the lowdown on potty training success in China, learns why French kids eat vegetables rather than throw them and discovers how much screen time Apple boss Steve Jobs allowed his children. The result is a funny, fascinating book which will be an invaluable source of wisdom and advice for parents everywhere. Mark Woods meets tiger mothers, stay-at-home dads, hover parents and boomerang babies, pulling together the very best parenting advice in the world. Emma Freud said “My children would like to point out that they would have been grateful if I had read this book twenty years ago” while Kirstie Allsopp described it as “funny as it is fascinating; a must-read for the planet's parents.” Planet Parent is published by White Ladder
And talking of fascinating facts from all around the world; this  is fun – the world’s statistics as if it had a population of just 100 people. 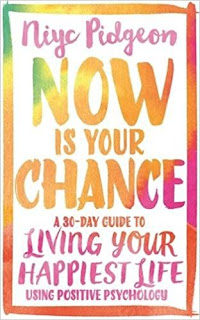 Everybody wants a better life, yet many of us are focused on external resources instead of relying on ourselves to know the way. In her new title, Now Is Your Chance (978 1781808047 £10.99). author Niyc Pidgeon shares her own life experience of being raped, bullied, and feeling like she had no voice, to healing from the inside out, and emerging empowered as a heart-centred and spirit-led female entrepreneur, who is successful, thriving, and helping other women live that too. Each chapter includes real life lessons from the author's own experience, practical tips, a Positive Psychology tool or a spirit-led mantra, stories from real clients, colleagues, and friends, and the latest happiness research, presented in an easily digestible way. Niyc has an exclusive interview with May’s Marie Claire magazine and the book will also be featured in July’s Yoga Magazine. Reviews of Now Is Your Chance will also appear in a current issue of Your Fitness and Soul & Spirit. It is published this month by Hay House. 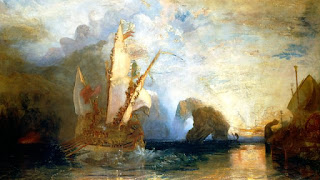 Two Carcanet poets – Chris Beckett and Karen McCarthy Woolf (Karen’s new book is out in June) – are involved in a project on Radio 4 next week called The Odyssey Project: My Name is Nobody. It’s a modern retelling of Homer’s Odyssey over several episodes and you can listen to Chris’s episode, Tamrat in the Cyclops Cave and Karen’s Night Shift on the BBC website  here.  Both poets perform in the episodes as well.

We love a quiz – and we love an anagram! So, can you solve these anagrams of ten classic book titles? 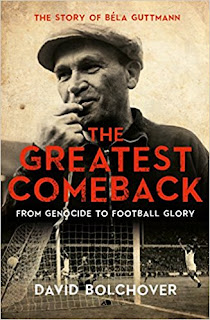 Before Pep Guardiola and before José Mourinho, there was Béla Guttmann: the first superstar football coach, and the man who paved the way for the celebrated coaches of the modern age. More extraordinarily still, Guttmann was a Holocaust survivor. Having narrowly dodged death by hiding for months in an attic near Budapest as thousands of fellow Jews in the neighbourhood were dragged off to be murdered, Guttmann later escaped from a slave labour camp. But by 1961, as coach of Benfica, he had lifted one of football's greatest prizes: the European Cup, a feat he repeated the following year. Rising from the death pits of Europe to become its champion in just over sixteen years, Guttmann performed the single greatest comeback in football history. The Greatest Comeback: From Genocide to Football Glory: The Story of Béla Guttmann (£20, hb, 978 1785901393) by David Bolchover was described by Daniel Finkelstein in the Times as: “Moving, original, full of insight, this is a gripping tale told by a skilled storyteller. You don’t need to be interested in the Holocaust to find this fascinating account of some great footballing moments absorbing. And you don’t need to be interested in football to want to learn about this tale of survival. But if you are by chance interested in both, you will find this book extraordinary.” The Mail on Sunday called it “A fascinating, brilliantly told biography … a moving, terrifying and inspirational story of survival and triumph.” There will be a serialisation of this title in The Guardian and reviews in the Sunday Times, the Economist, When Saturday Comes, the Times and the Mail on Sunday, plus interviews with Bolchover on Talk Sport and Five Live. The Greatest Comeback is published in May by Biteback. 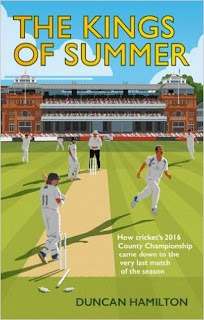 Staying with a sporting theme, The Kings of Summer: How Cricket's 2016 County Championship Came Down to the Last Match of the Season by Duncan Hamilton (hb, £9.99, 978 0993291128) has just been published by Safe Haven and there was a brilliant review for this excellent book last week in the Telegraph calling it “a fine piece of cricket writing, and a fitting tribute to a match that was everything a connoisseur of our wonderful game could want.” You can read that piece by Simon Heffer in full here.  The book describes in thrilling detail how, last autumn, the 2016 County Championship all came down to the final afternoon of the very last match. The two sides, Middlesex and Yorkshire, went into the game first and second in the table. If neither managed to force a win, it would leave the County Championship title to third-placed Somerset. Late September was blessed with beautiful Indian-summer weather; the biggest crowd for a county match at Lord's for some 40 years turned up to watch, and four days of battling, nail-biting cricket, the balance swinging either way, culminated in an unbelievably tense run chase by Yorkshire. As the autumn shadows lengthened, an unforgettably gladiatorial contest was finished by the Middlesex fast bowler Toby Roland-Jones in the most memorable way of all: a hat-trick. The award-winning sports writer Duncan Hamilton, who was at Lord's to watch every ball, re-lives this extraordinary, epic match, the finest advert for one of the most demanding competitions in any sport. You can read another a great piece about this book in the Yorkshire Post; here.
To finish, and looking forward to the publication of Queen in 3D next month; let’s have the top ten Queen songs of all time! Which one is your favourite?!


That’s all for now folks! More next week!
This blog is taken from a newsletter which is sent weekly to over 700 booksellers as well as publishers and publicists. If you would like to order any of the titles mentioned, then please talk to your Compass Sales Manager, or call the office on 020 8326 5696.
Posted by Compass Rose at Friday, April 14, 2017