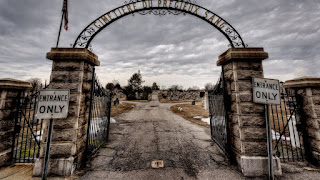 It’s Halloween next Tuesday of course – and a good opportunity to tell you about Haunted Places (£19.99, hb, 978 1782745211) which has just been published by Amber. The strange cries at night heard in a dilapidated penitentiary, the glimpse of a Grey Lady passing in a castle corridor, the face at the window in a room that has been locked for decades; stories of hauntings never cease to intrigue us. From English palaces to American prisons, from forts in India to a doll-infested island near Mexico City; Haunted Places features the world’s most fascinating spooky locations. All the stories are striking: from patients re-appearing in a deserted Italian island sanatorium, to the lift operator in a Banff hotel still working his shift decades after he died, to the restless spirits of the Salem witches and it also features 150 eerily atmospheric colour photographs. Author Robert Grenville thinks the appeal of paranormal places is linked to the idea of abandonment and ruin. "Abandoned buildings have a feeling of loss about them that a haunting only exaggerates and amplifies," he reflects. There is a brilliant interview with Robert and a whole gallery of photos from the book on the CNN Travel website here - have a look, the pictures are truly stunning. This title is part of Amber’s evocative Abandoned Places series, which includes Abandoned Castles (hb, £19.99, 978 1782745228), Abandoned Wrecks (hb, £19.99, 978 1782745204) and Abandoned Places (hb, £19.99, 978 1782743941). Full of striking photos, these alluring books illuminate and explore exploring compellingly beautiful locations, providing a moving pictorial examination of worlds we have left behind. 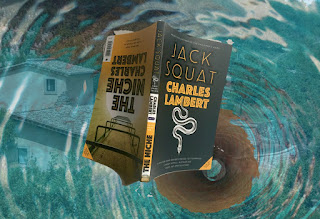 It's certainly the season to be scary, and Jack Squat and The Niche, which are Two Dark Tales - a pair of disturbing novellas from the master of the literary uncanny, Charles Lambert, have just had a good review in the TLS which called them “charming, elegantly written” and “deeply poignant.” Attitude Magazine described the two novellas as “gripping” and these disquieting, creepy stories are sure to win Charles new fans. Two Dark Tales (£8.99, pb, 9781910709290) has just been published by Aardvark Bureau as one paperback with two different covers on the front and back – very clever, as you can see here! 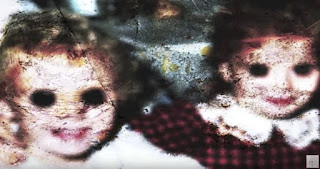 And talking of terrifying things; here is what the Buzzfeed community came up with when asked to nominate the most frightening Wikipedia web pages …. Don’t look at them alone! On 15th December it will be 20 years since ex-football hero Alan Hudson suffered a horrific hit and run car incident which almost killed him. Huddy: The Official Biography of Alan Hudson by Jason Pettigrove (978 1902719 573, pb, £13.99) is published next week and there will be a lot of media coverage for it – which began with a two-page spread in the Times a fortnight ago. Copies arrived this week the office and this illustrated large-format 240-page paperback with its sixteen pages of colour photos looks really good. It reveals for the first time, the full story of the real Alan Hudson, the man behind the lurid newspaper headlines and booze-fuelled anecdotes. One of the finest players football has ever seen, he is still revered at Chelsea, Stoke City and Arsenal and yet his professional success was dogged by injuries and enormous personal challenges. His love of the glitzy 'footballer lifestyle', dominated by hard-drinking, glamorous women, and frequent brushes with authority made him as many enemies as close friends. The one thing that couldn’t be taken away from him, however, was his talent for the beautiful game. There are some fantastically evocative pictures in this book – including one of Huddy with the rest of the Chelsea team recording Blue is the Colour in 1972, which includes the lines “After the ball was sent in, after the whistle blew. Charlie got his lead up and down the wing he flew. He crossed the ball to Huddy and Huddy passed it back. And then old Charlie knocked the goalie flat.” You can watch a rare Pathé film of that recording here. This book would make a great Christmas present for any footie fan who loves reminiscing about those 70’s glory days – it’s published by St David’s Press.

Talking of the beautiful game – is this the most ridiculous penalty goal ever? I think it just might be! 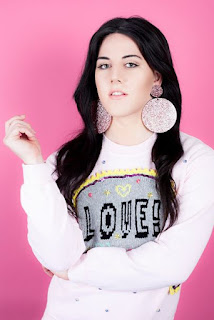 The Guardian called Charlie Craggs “a radical social innovator working across the UK, making a real difference to society.” The Huffington Post said “Charlie has made the world more inclusive, fair and a whole lot more fun too.” What does she do? Well, to quote her hugely influential campaign www.nailtransphobia.com , she’s “tackling transphobia fabulously, through education and empowerment.” Now she’s written a book, To My Trans Sisters (£12.99, pb, 978 1785923432) which has just been published by Jessica Kingsley. Charlie says she “began by asking myself what I felt my community needed, and what I needed when I began my own transition. I decided to create the book I wish I had had. When I started transitioning in 2013, I really struggled. I didn't know any other trans people, and I felt really lost and alone. I made a lot of mistakes—from not knowing how to cover my five o'clock shadow, to taking the wrong dose of hormones, to dealing with transphobia the total wrong way. What I needed was a big sister figure to guide me through transition. This is the case for most trans people: Transition is hard enough, but it's harder when you have go through it alone. I wanted to create a book of sisterly advice for the girls who need that big sister figure like I did.” 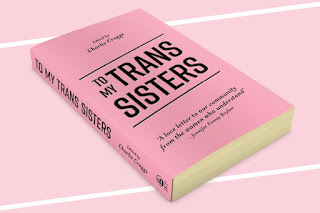 Lots of publicity for this one – you can read an article by Charlie in Broadly here,  read an extract from the book in The Debrief here, and see an interview in Refinery29 here. Vogue have crowned her one of their Vogue's Girls on a Mission and you can read that article here. They say “To My Trans Sisters is a compilation of essays - edited by our heroine - written as words of advice from a range of women from politicians and musicians to models. It's filled with lessons learnt and helpful advice ranging from light-hearted musings to the downright essentials. A must-read if ever there was.” Charlie has also been interviewed on LBC Radio, in Teen Vogue, in Elle and Dazed & Confused and I suspect we’re going to be hearing a lot more from this inspirational woman. 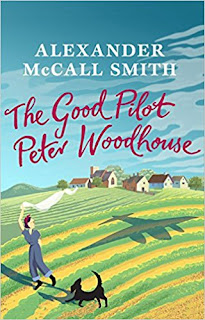 A new title from Alexander McCall Smith is always a Christmas treat and The Good Pilot, Peter Woodhouse (hb, £14.99, 978-1846974090 ) which is out next week from Polygon looks like a cracker to me! It’s in this year’s BA Xmas Catalogue and Sandy will be doing lots of media activity at Christmas time to support it, including Christmas stories for the Telegraph and The Lady. He’s just done a lovely interview with the Sunday Times, which ran last weekend. The book begins in 1944, when Val is working as a land girl when the Americans arrived at the nearby airfield. Mike, a young American airman, arrives in her life and so too does Peter Woodhouse, a dog badly treated on a neighbouring farm … You can find out more on Alexander McCall Smith’s own website here. 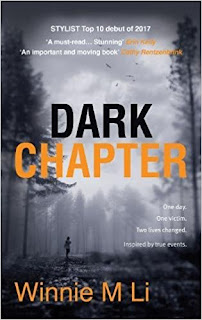 Last week, we told you about the brilliant Dark Chapter (£8.99, pb, 978 1785079061), winner of The Guardian Not the Booker prize and its author Winnie M Li will be appearing on Woman’s Hour on 7th November, (alongside Anne Cassidy, author of No Shame) to discuss sexual assault and rape. The discussion will be broadcast live between 10am and 10:45am. This is excellent publicity for this title which as well as winning Not the Booker, was Highly Commended for the CWA Debut Dagger 2015, shortlisted for the Emma Humphreys Memorial Prize and the Pat Kavanagh Prize and runner-up in the Leeds Literary Prize. Inspired by true events it is a story of the dark chapters and chance encounters that can irrevocably determine the shape of our lives and it’s published by Legend. 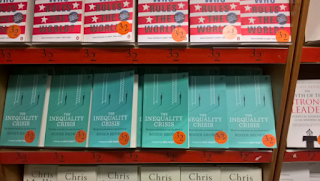 What are the causes of the rise in economic inequality in the western world and what can be done about it? The Inequality Crisis (pb, £12.99, 978 1447337584) is written by award-winning academic and policymaker Roger Brown, and provides a comprehensive survey of all the available evidence, looking at both sides of the inequality argument. In an accessible and jargon-free book packed with fascinating facts and quotes and fully up to date with the latest developments from Brexit to Trump; this title offers practical suggestions for what can be done, such as raising taxes on higher earners, tougher action against tax avoiders, helping people on lower incomes to save, and reducing inequalities in education. It has just been published by Policy Press and you can see a great display of it here at Blackwell’s Broad Street in Oxford – thanks guys! 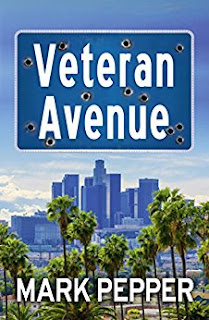 Time Out said “Mark Pepper is a writer to watch” and his latest thriller Veteran Avenue (pb, £8.99, 978 1911583318) has just been published by Urbane. Since leaving the military, John Frears has been drifting, unable to settle. Then he gets word that a funeral is taking place in LA. Donnie Chester, fellow veteran of the first Gulf War, has been shot dead. He decides to head to the States to pay his respects then go sightseeing. It is a simple plan, in keeping with his life to date. But his life is about to become more complicated when a mysterious event from his past crashes into the present, which could mean the difference between life and death… Mark’s previous two novels (which were published by Hodder) have had good reviews – the Lancashire Evening Post called The Short Cut “A speedy, scary and sexy thriller told with great style and wit” and he was interviewed recently talking about Veteran Avenue for the ITV News website – you can watch that here.  The book bloggers love him: as one said “Time Out are quoted as saying Mark Pepper is a writer to watch – maybe, but more to the point, he’s definitely one to read.” You can read an interesting piece about the story behind Veteran Avenue on the Dorset Book Detective’s website here.


This newsletter is sent weekly to over 700 booksellers as well as publishers and publicists. If you would like to order any of the titles mentioned, then please talk to your Compass Sales Manager, or call the office on 020 8326 5696.
Posted by Compass Rose at Friday, October 27, 2017