Good afternoon! Compass Points is back this week after a short holiday – I do hope that anyone else who had a little break enjoyed it! Well – it’s always good to see one of our books mentioned on prime time TV in front of millions of viewers – and such a moment occurred on Wednesday evening when Dara O’Briain suggested that the latest candidate on The Apprentice to be booted out by Lord Sugar might enjoy reading The Buffer’s Guide to Wine! What a great plug for this book – and indeed the whole Bluffer’s Guide series. There are three more must-have guides coming in August –  where you can find out all the information you will ever need on Football, Opera and Rock Music – and all without having sit through Match of the Day, Wagner’s  Ring Cycle or a Stone Roses concert – what a result! 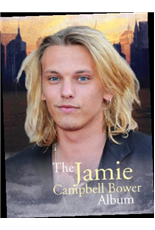 Big summer blockbuster films – love them or hate them – the season is definitely upon us. One of the biggest is going to be The Mortal Instruments: City of Bones. This is the first instalment of a movie franchise based on the multi-million-selling series of supernaturally-themed Young Adult books. Have a little watch of the trailer below – even if you are not a fan of this particular genre, I defy you not to jump about 10 feet up in the air at one point! One thing is for sure – it is about to make a mega star out of the male lead - Jamie Campbell Bower. This young chap already has a big fan base with the laydeez after vamping it up and casting spells in the Twilight and Harry Potter franchises; and he is now poised to become a household name. So – what a bit of luck that coming in July is The Jamie Campbell Bower Album from Plexus. Filled with facts and trivia, this full colour paperback reveals all about the young actor’s formative years at an English boarding school and early forays into youth theatre; his first major role opposite Johnny Depp in Tim ’s Sweeney Todd; his short-lived engagement to Harry Potter co-star Bonnie Wright, and subsequent romance with Mortal Instruments leading lady Lily Collins. Also covered is his bohemian personal style; his life as front man of indie-rock band the Darling Buds; his experiences shooting and promoting the Twilight films, and his on-set adventures everywhere from to to . Illustrated throughout with full-colour photos, this visual biography tells you everything there is to know about Jamie – from his least favourite thing about working on Breaking Dawn to the one item of clothing he’ll never leave the house without – and why he’s about to hit the big time. This book is £12.99, make sure it’s well displayed – you know you’ll sell loads to all those swooning teens!
Order The Jamie Campbell Bower Album here 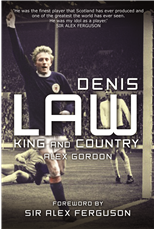 Now – another topic that provokes a love/hate reaction: footie. I actually thought the football season was over; but no – it still seems to be going on and on … and on. One man certainly much in the news recently is Sir Alex Ferguson – who co-incidentally has written the foreword to a major new biography of Denis Law – King and Country. Sir Alex says “He was the finest player that has ever produced and one of the greatest the world has ever seen. He was my idol as a player.”  Top praise indeed. If you are not familiar with the legendary goal scoring brilliance of Denis Law, then have a quick watch of a short YouTube film below.  In this unique portrait; the first book solely devoted to Denis Law’s illustrious international career; Alex Gordon interviews a vast array of former teammates such as John Grieg and international opponents such as Gordon Banks, George Best and Bobby Charlton. Denis Law was the showman supreme. He was more than a mere goal scorer whose cavalier thrusts and menacing darts brought panic to opposing defences. Law was an inspiration to those around him at club and country level and to younger generations of fans everywhere. Team-mates adored him, opponents feared him, fans revered him. He was a free spirit, an extrovert, a complete one-off, a rare combination of impudence and intelligence, class and clout. Denis Law is, was and always will be The King. He is undoubtedly one of football’s favourite sons and there will be a big market for this book from Man Utd fans, Scottish fans – in fact all footie fans in general! It is published by Arena Sport in August.
Order Denis Law King and Country here

Now – click here is the instantly recognizable trailer for a film that has become one of the most talked about of a generation. 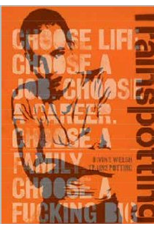 It still looks totally modern, so it is very hard to believe that it is in fact 20 years since Trainspotting burst into the world. It has now sold over one million copies in the UK alone, has been translated into thirty languages, was long listed for the 1993 Booker Prize, was number 10 in Waterstone’s Top 100 Books of the Twentieth Century,  tenth in the BFI’s 100 Best British Films and voted Best Scottish Film of All Time. Lust for Life: The Trainspotting Phenomenon by Neil Munro is published to coincide with the novel’s twentieth anniversary, has been officially approved by Irvine Welsh and contains rare, unseen photographs.  The book takes us back to the mid-1980s, when Irvine Welsh’s life was going nowhere fast. His teenage dreams of being a footballer or a rock star were over, and he was stuck in a series of white-collar jobs which he loathed. With the last throw of the dice, he started to write. In 1993 his debut novel – which centred on the desperate day-to-day struggles of a group of junkies – was published. Even ’s publisher, Secker &Warburg, didn’t hold out much hope. Only 1,000 copies were printed and the word was that might become a cult author. But, as the rave reviews increased, the book rapidly achieved global success. It was followed, in 1996, by Danny Boyle’s raw, high-energy film, which received worldwide critical acclaim and launched the careers of several young Scots actors such as Ewan McGregor, Ewen Bremner and Kelly Macdonald. So, how did an unknown writer pen this extraordinary story?  Lust for Life: The Trainspotting Phenomenon is published by Birlinn in August at £12.99.
Order Lust for Life here 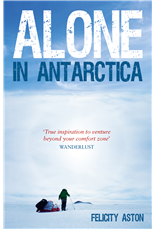 As sunshine and warm weather finally seems to have hit the ; it’s hard to imagine what it would be like to be in one of the coldest and most desolate places on earth – . What would it feel like to be out there alone in that empty vastness?  Only three people in the world have crossed alone. The first two were men and both Norwegian. At the age of 34, British woman Felicity Aston became the third – and unlike her predecessors, she didn’t use kites or parasails to assist her. Alone in Antarctica is a gripping and inspirational account of personal endurance shows what you can achieve when you grit your teeth and decide just to get through today in one piece. Felicity Aston has spent over a decade travelling, working and living all over the . In 2009 she led the first international team of women ever to ski to the South Pole; which became the subject of her first book, Call of the White. Outside Magazine, the leading adventure-travel magazine in the , named her one of their 2012 Adventurers of the Year and Felicity’s achievement was reported around the globe: the volume and breadth of media interest indicates the human interest value of the story. During the 59-day journey, Felicity was able to send text messages, and her openness and humour earned her a following of 10,000 people on Twitter, with more than 130,000 listening to her ‘phonecasts’. Alone in Antarctica is a unique account of an adventurer’s emotional and psychological journey and with the approaching centenary of Shackleton’s ‘Endurance’ expedition in 2014; this is an ideal time for a fresh, modern perspective on Antarctic exploration for a new generation. You can find out more about Felicity on her website www.felicityaston.co.uk and you can order Alone in Antarctica here.

“Amazon: the destroyer of bookshops”? Strong words – and they’re not mine but those of the ’s Culture Minister Aurélie Filippetti. Her attack coincided with her announcement of a €9m joint plan with French publishers to support independent booksellers. Her ideas make interesting reading – and you can find out all about it in an article in this week’s Telegraph here.

And finally – if you’re looking for some new display ideas for your bookshop; then have a look here for 35 suggestions as to what to do with all those books!