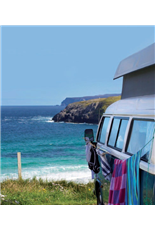 Well now that the weather finally seems to have taken a turn for the better, don’t forget about two great camping books published next month. Firstly, say hello to the first ever edition of Cool Camping Britain! Following on from the success of guides to , and ; Punk – the publishers of the ’s best-selling campsite guides have created one definitive British volume. Featuring 150 stunning campsites, from the wilds of the Scilly Isles to the sandy shores of ’s coastline, this book showcases the very best of British camping. New finds include a secret campsite in only accessible via a disused railway bridge, a eco-escape by the banks of a glorious river and beach camping on the Isle of Eigg, where a rare geological phenomenon causes the sands to sing along to the sound of the waves. This hand-picked selection of campsites is brought to life with humorous reviews and hundreds of colour photographs, plus handy practical info on what you can expect to find on site, things to do in the locality, and the best food and drink options around. And only the Cool Camping guides illustrate every single campsite with photographs, allowing campers to use the book for inspiration as well as information. already loves this series (over 250,000 copies sold) – but this is set to be the biggest-seller yet!
Order Cool Camping Britain here 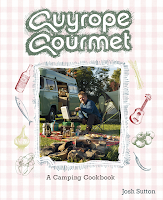 And secondly, what will you eat while you’re on your cool campsite? Why something from Guy Rope Gourmet of course! This second title from Punk says it’s time to bin the tins and fill up on delicious, freshly made meals on your camping trip. Guy Rope Gourmet is packed with inspirational recipes bursting with freshness and flavour – from hearty soups and stews to easy salads and stir-fries. Author Josh Sutton offers new ideas for camping recipes, plus tips and advice on cooking at camp. Josh – aka the Guy Rope Gourmet – has already gained a loyal following with his website, guyropegourmet.co.uk but he’s sure to have even more fans with the delicious recipes in his first ever cookbook.
Order Guy Rope Gourmet here 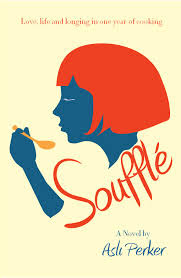 But if you’re not really in the mood for that sort of cooking – how about a nice Soufflé – something that even the Guy Rope Gourmet would be pushed to rustle up on your average campsite! Soufflé by Asli Perker is already a huge bestseller in , and is an uplifting novel about the healing power of cooking from Telegram. It would definitely appeal to fans of Eat, Pray, Love (and that’s a lot of readers!)  It is begins in where Lilia wakes up one morning to discover her loveless marriage is founded on nothing but deep mistrust and contempt. Meanwhile Marc in is mourning the death of his beloved wife and can’t bear to face the empty kitchen. And in , Ferda waits hand and foot on her demanding mother while trying to make time for her true passion: cooking for her loved ones. In this heart-warming and tender tale, Lilia, Marc and Ferda will find healing and joy in the simple art of cooking. There is a great piece about this book on the snazzy website Stylist.co.uk which you can go to here which describes Asli Perker as “one of the new name drop novelists” and also calls her as “the new Joanne Harris”. You can also read an extract from Soufflé there.
Order Souffle here

Now as we all know, readers do seem to have an enduring fascination with Adolf Hitler and Nazi history. Hitler: Military Commander by Rupert Matthews is a new paperback from Arcturus out in June which examines Hitler’s key military decisions during the Second World War, and assesses how far these decisions were militarily justified in light of the intelligence available at the time. It gives fascinating insights into Hitler’s relationships with his generals, and how opinion of the Fuhrer’s grasp of military strategy was shaped by the effect of his personality. You can order Hitler Military Commander here but if that seems a bit heavy for you, then why not have a little watch of this amusing Hitler (now those are two words not usually seen in the same sentence) film below here!

Congratulations (again) to Tan Twan Eng as The Garden of Evening Mists has just been shortlisted for the Walter Scott Prize for Historical Fiction. The other books on the shortlist are: Bring Up the Bodies by Hilary Mantel, The Daughters of Mars by Thomas Keneally, Toby’s Room by Pat Barker, Merivel by Rose Tremain and The Streets by Anthony Quinn. The judges said of the shortlist: “This year's shortlist is rich and complex contains breathtaking writing and gloriously unexpected stories which refresh understandings of history in a way in which Sir Walter Scott would have approved.” The judges will meet in early June and the winner will be announced at a ceremony on the 14th June.

Back to good weather activities now – every week seems to bring yet more bikes onto our streets. No doubt many have been inspired in some way to don the lycra by the remarkable rise of one man – Chris Froome.  Va Va Froome by David Sharpe is a fascinating portrait of an honest, intelligent, thoughtful, bookish 27-year-old – with a hidden steely determination. Chris Froome has ploughed his own esoteric furrow from his childhood in Africa to his current home in the glamorous tax-haven of and in 2013 he aims to usurp Wiggins as Tour champion. But will the fearless Brit let him take his title? This is a C-format paperback, published in June by Arena Sport which has 16 full colour pages. It takes us along Froome’s path to professional cycling, from mountain biking on dusty roads in the nature reserves of ’s to the giddy heights of the Tour de France and the Olympics, which has been unlike any other in the history of the sport.
Order Va Va Froome here

And if you’re a fan, have a little watch of this five minute tribute film to Chris below.

“Cocaine’s not addictive, darling. I should know, I’ve been taking for years.” That airy disclaimer uttered by Tallulah Bankhead echoes ironically today. No longer the taste only of a fashionable elite; the White Lady has a presence – discreet or not so – at many, perhaps most, social gatherings. Welcome or not, she’s a guest at the party. The coca plant was named the Tree of Life. Cocaine, first extracted in 1860, was greeted by the world as a wonder drug. Sigmund Freud embraced it as a remedy for almost every ailment and by 1900 cocaine formed the basis to several hundred brands of patent medicines Coke: An Anecdotal History by Jeremy Scott and Natalia Naish is a history of the drug since its first appearance but it is also the personality-led stories of its more notorious users and its antagonists in government and the law. Rich in anecdote, often tragic, but sometimes grotesque and even hilarious, Coke is neither judgemental nor condoning. Along with informing, the book’s prime intention is to be an amusing and entertaining fast-paced read. This light, entertaining and slightly irreverent romp through the history of the drug is the first in a dazzling new series reflecting on the subculture of drugs. It explores the chemical composition of cocaine and includes statistics and key facts about its make-up and use, alongside lively and entertaining character profiles of some of its more celebrated and notorious users. Coke is published in hardback in June by Robson Press. And a quiz question to end with – who wrote: “Some get a kick from cocaine. I’m sure that if I took even one sniff that would bore me terrifically too”? Cole Porter of course – back in the 1930’s – in his song I Get a Kick Out Of You. Would you like to here it? Of course you would – just listen to this cool version by Louis Armstrong and Oscar Peterson.

This blog is read is weekly by over 600 booksellers, publishers and publicists. If you would like to order any of the titles mentioned, then please click here to go to the Compass New Titles Website.

That’s all for now folks, more next week!
Posted by Compass Rose at Friday, April 19, 2013