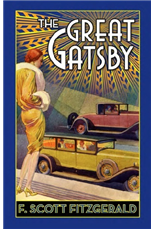 OK – a quiz question to start. Which novel opens with the line “In my younger and more vulnerable years my father gave me some advice I've been turning over in my mind ever since.”? It is of course the incomparable The Great Gatsby by F. Scott Fitzgerald. The media have been positively breathless with excitement about the new Baz Luhrmann film (starring Leonardo DiCaprio and Carey Mulligan) of this bestselling book for months – and now the moment they’ve all been waiting for is here! The new film opens in the on 17 May and you can watch a trailer below. 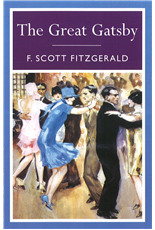 Is The Great Gatsby a love story?  Baz Luhrmann says he has made “a great, tragic love story” but Fitzgerald himself thought his novel was more about delusion and failure. And is the film any good? Whether it is or not, it is absolutely certain to bring yet more readers to the book! So make sure you have plenty of stock! We have a £7.99 hardback in a slipcase – great price, great product and a gorgeous retro cover (above) which you can order here and also a £3.99 paperback – also with a lovely cover (right) which you can order here. Both are published by Arcturus.

And who remembers the 1974 film of the book – starring Robert Redford and Mia Farrow. You may find it interesting to have a little watch it below!

And what about going even further back to the 1949 film – starring Alan Ladd and Betty Field. You can watch the start of it below. 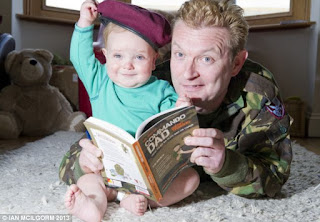 Now, as we all know (although maybe some of us are more interested than others) that Prince William and the fragrant Kate are about to have a baby. And what parenting manual is Prince William reading to prepare him for this momentous occasion? A bit of Gina Ford perhaps – or Penelope Leech? Nope, it is none other Summersdale’s Commando Dad: How to be an Elite Dad or Carer. From Birth to Three Years by Neil Sinclair. You will remember this title; which was published last spring and promised to teach new fathers in no-nonsense terms how to: Survive the first 24 hours; Prepare and Plan to Prevent Poor Parental Performance; Maintain Morale in the Ranks; Feed, Clothe and Transport your Troops and much, much more! There was a fantastic piece in the Daily Mail last week all about this – which you can read here. Honestly, you couldn’t buy this sort of publicity for a book – it is unbelievable. Get the book into your bookshops with a big sign above it saying “Prince William’s favourite!” and it will sell! The price is £9.99, it’s out in paperback from Summersdale and the ISBN is 9781849532617.  The Bookseller charts Commando Dad as putting on growth of 133% this week – don’t miss out! More info is here. While you’re at it, maybe you could do a whole display of Have you just had a baby? titles in July to coincide with the arrival of the royal moppet!

And while we’re on the subject of royalty – did you see Chris Hutchins, author of Harry: The People’s Prince on ITV’s Daybreak this morning, talking about Harry’s forthcoming tour of the ? All terrific publicity for the book (published by Robson Press) which you can order here. 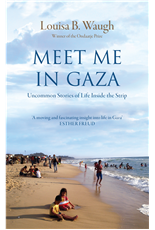 OK, now let’s move away from the privileged worlds of Gatsby and the royal princes, to somewhere completely different. To the Gaza Strip in fact. Meet Me in Gaza: Uncommon Stories of Life inside the Strip is by Louisa Waugh who lived and worked in the Gaza Strip from December 2007 to April 2009. Her other works include Hearing Birds Fly: A Nomadic Year in Mongolia, which won the 2004 inaugural Royal Society of Literature Ondaatje Prize. This is an intimate and poignant account of life inside . How do people and goods get in and out? Do Gazans ever have fun? Is the Strip beautiful? And do TV reports actually reflect ordinary life inside the world’s largest open-air prison? Meet Me in Gaza reveals the pleasures and pains, hopes and frustrations of Gazans going about their daily lives. Interspersed with fascinating historical, cultural and geographical detail, this is an evocative portrait of a Mediterranean country and its people. Esther Freud called it “A moving and fascinating insight into life in ” and you can order Meet me in Gaza and find out more here. 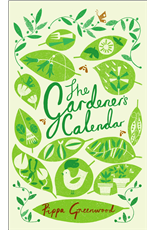 Pippa Greenwood is a leading light in the world of horticulture. As well as appearing regularly on BBC Two’s Gardeners’ World, she is a panellist and bug expert on Radio 4’s Gardeners’ Question Time, has written a number of award-winning books and contributes to BBC Gardeners’ World Magazine. Next week she will be BBC Radio 3’s Essential Classic Guest every day at 10.30am from 20-24 May; discussing music, her life and of course, gardening. She is the author of A Gardener’s Calendar which is a beautifully illustrated pocket sized guide containing specific month-by-month ‘to do’ lists for ornamental gardens, edible crops and general maintenance, as well as tips on things to look out for, such as pests and how to eliminate them. With diary pages for making your own notes each month, this little calendar is a must-have whether you’re a seasoned gardener or just starting out. A Gardener’s Calendar taps nicely  into the widespread current interest in “growing your own”  –  and with the slow start to the spring this year, many gardeners are only just getting going, so now’s the time to put this book on display!
Order A Gardener's Calendar here. 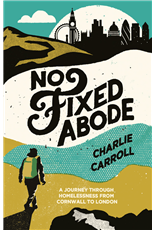 In the summer of 2011, Charlie Carroll found the school he taught at could not afford to renew his teaching contract. With no job and no money, but suddenly all the  time in the world, he decided to travel from Cornwall to London in a peculiarly old-fashioned, quintessentially English and remarkably cheap way – as a tramp, on foot, sleeping rough. No Fixed Abode: A Journey Through Homelessness from to is a 21st-century companion to George Orwell’s Down and Out in Paris and London, with parallels to Laurie Lee’s As I Walked Out One Midsummer Morning. Charlie Carroll’s journey was filled with colour, surprise and danger, and a range of memorable encounters. With a striking mix of travel and current affairs writing, No Fixed Abode sheds light on a side of the few ever see from within. It is a fascinating perspective on the ways in which the life of the tramp has evolved and includes interviews with Mayor of London Boris Johnson and Jeremy Paxman; as well as numerous homeless people and those who work with them, providing a new perspective on how and why people end up on the street, and what can be done to help them. It's published by Summersdale, and You can order it here.

How about a spot of soul on a Friday afternoon? Lovely. R. Kelly has sold over 35 million records worldwide and has worked with outstanding talents from every generation from Celine Dion to Aretha Franklin to Michael Jackson to Jay Z.  Now this international R&B superstar tells his story for the first time, covering his highest achievements and his darkest moments. Soulacoaster: The Diary of Me by R. Kelly has become a bit of an internet phenomenon, when the viral video of actor Gary Oldman reading the memoir received almost quarter of a million hits on YouTube. Have a look below to get a flavour.

Through the iconic anthem I Believe I Can Fly and a series of R&B mega-hits; R. Kelly has proven himself to be one of the greatest musical talents of his generation. Yet his rollercoaster ride to the top has been as perilous as it has been exhilarating. From the crippling learning disorder that rendered him unable to read or write, to the teacher mentor who prophesised that his destiny was in music, not basketball, we follow his evolution from performer to struggling LA musician and beyond. Kelly reveals his hard won ascent to superstardom and his battle to move forward after legal and personal ordeals that nearly ruined his life. Now back at the top, Kelly recounts the journey that has taken him to new heights of maturity and artistry. Soulacoaster unlocks the door to R. Kelly's story as only he can tell it; promising his fans an intimate and unforgettable ride. It’s fully illustrated in colour throughout with stunning photographs from throughout his career, and is published in July at £12.99 from Hay House. You can order it here.

And here’s my absolute favourite R. Kelly song; I Believe I Can Fly – just to set you up nicely for the weekend!