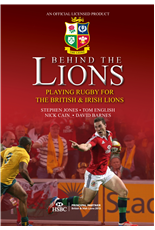 Wow – what an amazing summer of sport it is turning out to be! And due to an excellent bit of planning by our publishers, Compass have two of the hot sporting books that every enthusiast will want! First up is Behind the Lions published by Arena Sport. Behind The Lions: Playing Rugby for the British & Irish Lions is an official licensed product of the British & Irish Lions and is a completely new edition, by Stephen Jones, Tom English, Nick Cain and David Barnes. It covers every tour in the Lions 125 year history, including the victorious 2013 tour. In it four world-renowned rugby authors representing each of the Home Unions give an unparalleled insight into what it means to play for the British Lions, interviewing a vast array of former and current players to uncover the passion, pride and exhilaration experienced when wearing the famous red jersey. Stephen Jones is a multi award-winning rugby correspondent for the Sunday Times and world-renowned rugby expert. Tom English is the award-winning chief sports writer for on Sunday. Nick Cain is a rugby columnist for the Sunday Times and chief writer for The Rugby Paper. David Barnes is a freelance journalist and co-author of Behind the Thistle: Playing Rugby for Scotland. The first edition was shortlisted for Rugby Book of the Year at the British Sports Book Awards 2013 and the Sunday Times called it “A fascinating collection of insights” This new edition will include stories, anecdotes, interviews and images from the 2013 Lions tour, that witnessed the Lions greatest triumph for 16 years. It is a tale of heart-break and ecstasy, humour and poignancy that is at once inspirational, moving and utterly compelling. This is the story of the British & Irish Lions … in their own words. And who’d like to re-live a little bit of this summer’s Lions’ triumph – oooh yes please – well then, just have a look below! It’s hardback, it’s £19.999 and it’s published in September and you can order Behind the Lions and find out more here 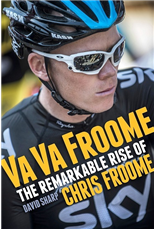 The second sporting success story of the summer is of course Chris Froome – and a new edition of Va Va Froome by David Sharpe is also published in September, again by Arena Sport. This edition has been completely updated to include all the details of Chris’s remarkable Tour de France triumph and is a fascinating portrait of a global star on the rise. An honest, intelligent, thoughtful, bookish 27-year-old – with a hidden steely determination – Chris Froome is far removed from your average sportsman, having ploughed his own esoteric furrow from his childhood in Africa to his current home in the glamorous tax-haven of . On 22 July 2012 Chris Froome made history as the first African-born cyclist to stand on the podium at the Tour de France. Ten days later at the London Olympic Games he won a bronze medal in the time trial for his adopted nation in Team GB colours. Froome’s path to professional cycling, from mountain biking on dusty roads in the nature reserves of Kenya’s Great Rift Valley - alongside wild animals - to the giddy heights of the Tour de France and the Olympics, has been unlike any other in the history of the sport. Born in to British parents he was schooled in and studied economics at university. But he abandoned his degree to take up the offer of a professional cycling contract in . A fish out of water, unused to the harsh northern hemisphere winters, with no idea of the tactics, discipline or etiquette of riding in the professional peloton, Froome encountered a shock entrance into the rough and tumble world of top level European bike racing. And then of course in 2013 Chris Froome replaced Bradley Wiggins as the lead rider for Team Sky’s assault on the Tour de France and the rest is history. Here's Chris talking about his amazing victory in Paris.
Order Va Va Froome here! 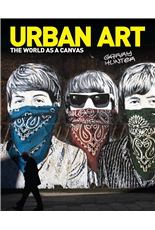 If you see the wall opposite your bookshop has been covered overnight by a colourful mural do you think a) what a pain, better get the council to come and scrub that off or b) ooohh good, I’m clearly now working in a deeply cool and trendy part of town – let’s get my iphone out and send a pic to all my mates. If the answer is b) then Urban Art is going to be the book for you this autumn. This is a fantastic, eye-catching, beautifully illustrated book that explores the latest developments in street art; an increasingly important, prominent and eloquent feature of the modern cityscape. It focuses on the work of all the major world practitioners of different types of urban art, including stencils, 3D chalk art and illusions and its themes include icons (fictional characters and spiritual legends), recycled art, performance art and pastiches. The artists include Mr Brainwash, Morris Wild, David Snoo Wilson, IceCreamVanMan, Strook, Sten and Lex and Edgar Muller – names all familiar to you I’m sure (what?!). This is vibrant cutting-edge stuff, it’s full colour throughout and will be a £7.99 paperback published by Arcturus. It is by Garry Hunter who a professional photographer and independent curator whose passion for street art has taken him all over the world. You can read a short article by Garry and look at some street art here, and you can order Urban Art and find out more details here. 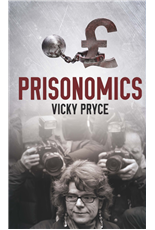 When economist Vicky Pryce admitted taking speeding points meant for her former husband, the ex-Cabinet minister Chris Huhne, she found herself convicted of perverting the course of justice. After a very public trial she was sent to prison near . There, she kept a diary in which she recorded her very challenging experiences and her strong views on how the prison system works, especially with regard to how it treats women. The result, Prisonomics, will provide a compelling analysis of the cost to the economy, as well as the human cost, of keeping women in prison. In it, she uses her personal experiences and professional understanding to look at how prison works, and should work, from an economist’s perspective. Vicky Pryce is extremely high profile and this book is going to attract mega media attention when it’s published in September. Major serialisation with a national newspaper is very likely – we’ll keep you posted! Her previous book, Greekonomics, was highly acclaimed and sold 3,000 copies. Prisonomics is a £16.99 hardback from Biteback and you can order it and find out more here. 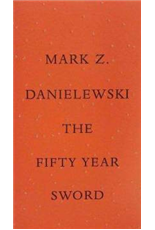 Now, we love a bit of cult fiction at Compass – and even better when it’s cult fiction published as a limited edition £20 hardback, full colour throughout. The Fifty Year Sword by Mark Z. Danielewski is one such book – this author is already a bit of a sensation and the book attracted rave reviews when published in .” A swift, old-style ghost story with crisp, eerie illustrations. The Fifty Year Sword is a pleasure to read.” said the Chicago Tribune while Publishers Weekly called it “An objet d’art that chillingly holds us accountable for our worst thoughts.” The Fifty Year Sword is an explosive and thrilling ghost story. A local seamstress named Chintana finds herself responsible for five orphans on her birthday. The children are captivated by the storyteller who arrives and tells a tale of vengeance - and produces a long black box he sets before them. As midnight approaches, the box is opened, a fateful dare is made, and the children as well as Chintana come face to face with the consequences of a malice retold. The Fifty Year Sword uses strange formatting and colours throughout the book, much like Danielewski's previous work, House of Leaves. Since this revolutionary debut Mark Z. Danielewski has continuously astonished critics and fans with his blend of beautiful prose and wild experiments with typography and design. These passions culminate in The Fifty Year Sword, a novella of startling simplicity, tremendous artistry and with a terrifying sting in the tale. Mark is a National Book Award finalist and one of the ’s most revered cult writers. Have a look at the number of Tumblr posts there are on this book to give you a sense of what it’s all about – and how popular he is. And click here to see Mark talking about his books on You Tube – I’m not sure it makes them any less cryptic – but have a look! There will be lots of publicity for this title when it is published by Cargo in September – and Mark Z. Danielewski will be appearing for six select dates – this author is somewhat elusive, so this is extremely rare!
Order The Fifty Year Sword and find out more here 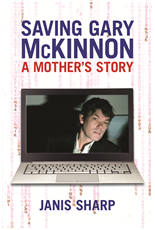 For ten years Gary McKinnon became the unwilling focus of Anglo-US diplomatic relations. A computer systems analyst living in , he firmly believed that the government was withholding vital information about the presence of UFOs. The unremarkable lives of he and his mother Janis changed dramatically one morning in 2002 when phoned to tell her that he had just spent four hours at his local police station being interviewed about hacking into government computers. Two years later, on 7 October 2004, the government filed a request for ’s extradition and on 7 June 2005 he was arrested. Extradition to the seemed certain and so, fearing that would take his own life rather than face being taken away, Janis’s extraordinary battle began. Janis Sharp spent the following ten years and seven months fighting her son’s extradition. In October 2012 she finally won her battle and in December 2012 the Crown Prosecution Service announced that would not face charges in the either. These two announcements were a spectacular victory for Janis and spoke volumes about her relentless fight to save ’s life. Saving Gary McKinnon is the true story of a mother’s fight to save her son from living out the rest of his life behind bars. The judiciary had all the might of the world’s greatest power. But it had not reckoned on ’s mother. Saving Gary McKinnon: A Mother’s Story by Janis Sharp is the extraordinary true story of a mother’s fight to overcome the biggest powers in the world. Janis will promote this book extensively; supported by a wide-ranging press and marketing campaign and a serialisation under negotiation. It’s published in September by Biteback.
Order Saving Gary McKinnon here

And finally – talking of mighty US forces - who’s still loving Blurred Lines by Robin Thicke – or are we all getting just a little bit tired of hearing it? Here’s the video for any of you who still want more!

Maybe just a little bit too sexist for your taste? Well have a look at this sexy parody by Mod Carousel, a Seattle based boylesque troupe – better than the original in my opinion!

Compass Points is now off on holiday – but will be back in a fortnight!

This blog is read weekly by over 600 booksellers, publishers and publicists. If you would like to order any of the titles mentioned, then please click here to go to the Compass New Titles Website or talk to your Compass Sales representative.

That’s all for now folks, more in a fortnight!
Posted by Compass Rose at Friday, July 26, 2013