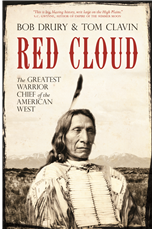 Good afternoon!  Just to get you in the mood for our first book today, have a look at this epic battle scene from The Last of the Mohicans above.  Gripping and bloodthirsty stuff – very like our first book Red Cloud: The Untold Story of an American Legend by Bob Drury and Tom Clavin which is published by Robson Press in November. It tells the true tale of the only Native American Warrior Chief to ever defeat the army in open warfare (Crazy Horse, Sitting Bull, Geronimo – none of them managed it!) It’s an epic, rip-roaring and, frankly, ferociously bloody tale from the last days of the Plains Indians of the Old West, and the birth of the American nation. This is the story of Red Cloud, the great Sioux chief who witnessed the opening of the West, and the only Plains Indian to defeat the United States Army in a war. At the peak of their chief’s powers, the Sioux could claim control of one-fifth of the . But unlike Sitting Bull, Crazy Horse, or Geronimo, the fog of history has left Red Cloud strangely obscured. Now, thanks to painstaking research by two award-winning authors, his incredible story can finally be told. Born in 1821 Red Cloud grew up an orphan who overcame myriad social disadvantages to advance in Sioux culture. Through fearless raids against neighbouring tribes, like the Crow and Pawnee, he acquired a reputation as the best leader of his fellow warriors, catapulting him into the Sioux elite - and preparing him for the epic struggle his nation would face with an expanding United States, leading to a conflict whose massacres presaged the Little Bighorn and ensured Red Cloud’s place in the pantheon of Native American legends. A story as big as the West, Red Cloud is a gripping story from the Old West and the birth of . Charles Frazier, author of described it as “An absorbing and evocative examination of the endgame in the three-hundred-year war between Native Americans and settlers of European descent.” And S.C. Gwynne, author of Empire of the Summer Moon said “The word ‘epic’ is overused these days. Not here. This is big, blazing history, writ large on the High Plains.” As you may be aware,Western books have been quietly doing the business lately: Empire of the Summer Moon sold 12,800 copies, The Last Stand by Nathanial Philbrick sold 8,000 copies) and The Last Gunfight by Jeff Guinn sold 9,000 in hardback and paperback. This book is in the bestselling tradition of Dee Brown’s Bury My Heart at Wounded Knee which has had an astonishing 92,000 sales to date and features a cast of legends of the Old West, including Sherman, Custer, Crazy Horse, Jim Bridger, John Bozeman etc. This is the ultimate “Dad” book for Christmas! If anyone would like to read the first chapter we can forward it to you online – just email pat@compass-dsa.co.uk with Red Cloud in the subject box!
Order Red Cloud and find out more here 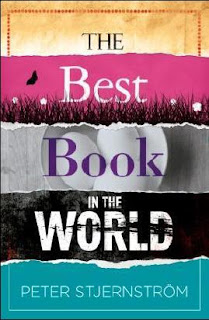 Interest is building for The Best Book in the World by Peter Stjernström, published by Hesperus in a couple of weeks’ time. This is a wonderfully quirky and hilarious novel in a similar vein to The Hundred-Year-Old Man Who Climbed Out of the Window and Disappeared. It’s a perfect read as the nights draw in and great Christmas gift for anyone with a wicked sense of humour. The author will be in the early October to promote the book. It begins with author Titus Jensen who is waiting for his big break. But he’s middle-aged, has rather a fondness for alcohol and no one seems to take him seriously enough. He makes ends meet by giving public readings from obscure books at festivals across which is okay, but he can’t help thinking there has to be more to life for an author of his quality. Eddie X on the other hand is cool, hip, a hit with the ladies and loves being the centre of attention. A radical poet and regular on the festival circuit, he too can’t help thinking there has to be more to life for a talented, good-looking man like himself… One night, the unlikely pair get horribly drunk together and hatch a plan. There’s only one thing for a budding writer to do to get worldwide recognition: write the best book in the world – a book so amazing that it will end up on all the bestseller lists in every category imaginable: thriller, self-help, cookery, business, dieting… a book that combines everything in one! But there is only room for one such amazing book and as the alcohol-induced haze clears Titus and Eddie X both realise they are not willing to share the limelight. Who will win the race to write The Best Book in the World, and to what unimaginable lengths will they go to get there first…? Hilariously quirky but surprisingly touching, The Best Book in the World will take you on a meandering race to the finish line, throwing plenty of satirical punches along the way!
You can order The Best Book in the World here! 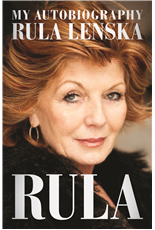 By anyone’s standards, Rula Lenska has led an extraordinary life. Born to Polish aristocrats, refugees from the Nazis and then the Soviets, her father was heavily involved with the Polish government in exile. Renowned as a vivacious flame-haired beauty, she found fame in the 1970s as ‘Q’ in the TV series Rock Follies before accidently conquering America with an Alberto VO5 hair products commercial, famously prompting Johnny Carson to ask on his show, ‘Who the hell is Rula Lenska?’ Her career has been a rollercoaster ride through classic British television series such as Minder, To the Manor Born, The Detectives, Doctor Who, Casualty, Space:1999 and, of course, Coronation Street, as well as on stage with The Vagina Monologues and Calendar Girls. However, her success has often been tempered with heartache. Despite the fanfare surrounding her celebrity marriage to Dennis Waterman, the relationship would eventually turn sour with recriminations and accusations of alcoholism and spousal abuse. Then there was her surreal appearance on Celebrity Big Brother, which she calls sixteen days of madness, during which she suffered the likes of Pete Burns and Michael Barrymore, before emerging to find pictures of George Galloway with his head in her crotch being broadcast all over the world. Now older and wiser and elevated to the status of national treasure, Rula Lenska has got a fascinating story to tell. Rula: My Autobiography by Rula Lenska is the autobiography of ’s best-known redhead and a fascinating journey through a life well lived. She discloses what really went on in her eleven-year marriage to Dennis Waterman and reveals the truth behind Celebrity Big Brother. Rula is a great self publicist and will be promoting her book very widely in a major press campaign – starting now – it’s published in the next couple of weeks by Robson Press.
Order Rula here

And, it has to be shown again I feel  – here’s that infamous clip – plus various comments, including some from Rula herself!

Hay House have been getting some great publicity for their title E Squared by Pam Grout which is also published this month. It was reviewed by The Sun (circ. 2.2 million) on 16th August. E Squared was originally submitted to Hay House in the US where it sat on the slush pile before finally being picked up by editor Alex Freemon and was first published in the US in January 2013. After becoming a mega word-of-mouth hit E Squared now been in the New York Times bestseller list for four consecutive weeks, seven months after publication. It will be published here in the as a paperback priced at £10.99 and will be backed by a large marketing campaign. This is a really extraordinary self-help book which asks readers to follow ten experiments which seek to prove that our thoughts create reality. Yes, you read that right. It says prove. The experiments, each of which can be conducted with absolutely no money and very little time expenditure, demonstrate that spiritual principles are as dependable as gravity, as consistent as 's 2nd law of motion. This sounds like a fairly unreliable and frankly unbelievable claim; but this book has achieved astounding word of mouth success, based on readers’ incredible results from the experiments within the book. Reading group guides, video blogs and many articles in major media are expected in support of E Squared and many are referring to it as the new The Secret. If at this point you are thinking “what the hell are you talking about??” then why not look at this clip below to see one fan demonstrating an experiment from the book. And you can order E Squared and find out more about it here.

Now, who would have thought that the humble children’s picture book could be controversial? Well, in this week’s American books spot, here’s a list from Ingram of banned and challenged picture books. Pretty interesting I think. Remember you can order any of these titles by opening an account with Ingram – or using your existing account if you already have one. It’s very easy to open one, just click here – it’s extremely straightforward. Or you can go to www.ingramcontent.com and click on the button that says GET STARTED, or you can talk to your Compass Account Manager. Ingram will run some credit checks and within 3-4 days your account should be up and running. 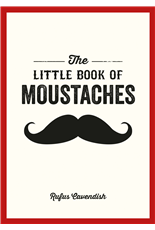 Cast your mind back to last November. Were you suddenly aware of many more hairy faced gentlemen visiting your bookshop? Or maybe your own staff suddenly started sporting bristly appendages? During November each year, Movember is responsible for the sprouting of millions of moustaches around the world. With their “Mo’s” men raise vital funds and awareness for prostate and testicular cancer and mental health. As an independent global charity, Movember’s vision is to have an everlasting impact on the face of men’s health. You can find out all about Movember in the here. An essential title for any bookshop to have on display during this month will be The Little Book of Moustaches by Rufus Cavendish. This impeccably turned-out little guide to the world’s most famous upper-lip embellishments will teach you how to groom, craft, style and quote your way to Moustache Greatness. It’s a £4.99 hardback with colour illustrations published by Summersdale and is a really fun and stylish guide! So dust oﬀ your Dali and shake out your Selleck, the ’tache is back!
Order The Little Book of Moustaches here

And if you’re looking for some inspiration in the facial hair department – have a look at this Magic Beard video on YouTube!

This blog is read weekly by over 600 booksellers, publishers and publicists. If you would like to order any of the titles mentioned, then please click here to go to the Compass New Titles Website or talk to your Compass Sales representative.
Posted by Compass Rose at Friday, September 06, 2013