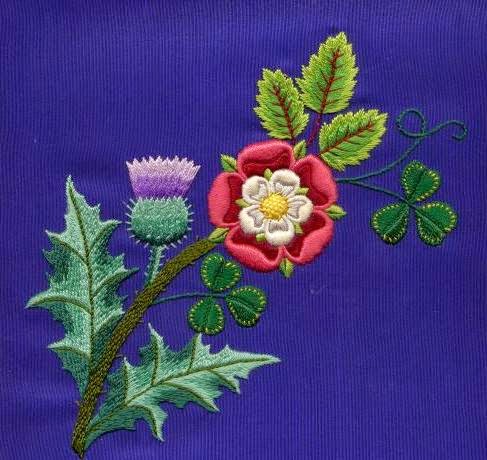 Ah, how glad we are on this historic day that two of the most melodious and tuneful sounds in our are still available for us all to enjoy as one nation. But which do you prefer? It’s a tricky one - this... or this.  I know, I know, both so lyrical and lovely it’s almost impossible to decide.  What a pity no one has decided to combine them – oh hang on a minute, what’s this I see? Yep, I think we can all agree that this probably not something that is Better Together! 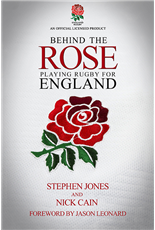 Let’s start with two titles, each featuring a sport from either side of . Firstly, Behind the Rose by Stephen Jones and Nick Cain This publication is an official licensed product of the Rugby Football Union, the governing body of English rugby, and has exclusive access to the players, the archives and the fans. It is a unique history of the rugby team told in the players’ own words, from the writers of the bestselling rugby book of 2012-13, Behind the Lions. It is written by two world renowned and award-winning rugby writers (who have a combined Twitter following of over 37k) and is a handsome £25 hardback, with colour and black and white illustrations throughout. This is a complete history of the England rugby union team – told by the players themselves which is based on a combination of painstaking research into the early years of the England team through exclusive interviews with a vast array of Test match stars from before the Second World War to the present day. It is a story etched in blood, sweat and tears; a story of great joy and heart-breaking sorrow; a story of sacrifice, agony, endeavour and triumph. Behind the Rose lifts the lid on what it is to play for – the trials and tribulations behind the scenes, the glory, the drama and the honour on the field, and the heart-warming tales of friendship and humour off it. Absorbing and illuminating, this is a must-have for all supporters who have ever dreamed of walking the hallowed corridors of Twickenham as a Test match player, preparing themselves for battle in the changing rooms and then marching out to that field of dreams with the deafening roar of the crowd in their ears and the red rose emblazoned on their chest.  Behind the Rose: Playing Rugby for by Stephen Jones and Nick Cain is published in November by Arena Sports (hb, 978 1909715196 £25.00).
Order Behind the Rose here 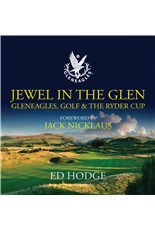 And secondly – for all your booksellers who do well with golfing titles, there’s Jewel in the Glen: Gleneagles, Golf and the Ryder Cup by Ed Hodge with a foreword by Jack Nicklaus (hb, 978 1909715233 £25.00). This is a new updated edition which will include a new chapter on the 2014 Ryder Cup and features interviews with: Gary Player, Lee Trevino, Ian Woosnam, Sam Torrance, Sandy Lyle, Bernard Gallacher, Sir Jackie Stewart, Sir Sean Connery, Andy Murray and even … Alex Salmond!! The Ryder Cup starts in six days time, on 23 September, and this title will be out in November. Tracing the history of the Ryder Cup back to that famous forerunner match in 1921; this book intertwines the histories of the coveted prize with the famous five star resort’s own rich heritage on and off the course. Through a series of over 80 in-depth interviews with an array of international celebrities, Jewel in the Glen reveals what the Ryder Cup and Gleneagles means to them while examining the impact of the tournament on the local community and the wider Scottish society, culture, and economy. This beautiful £25 volume paints a unique and absorbing portrait of Gleneagles and Scottish golf as a whole and is the ideal Christmas present for all golfing fans. It is published by Arena Sport, and you can order Jewel in the Glen here 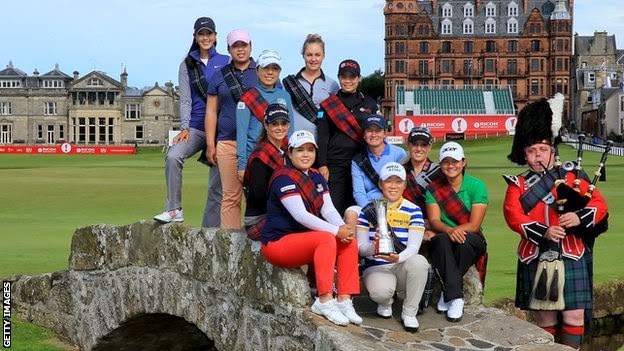 On the subject of golf, let’s not forget that another very important ballot took place in Scotland yesterday: The Royal and Ancient Golf Club in voted in favour of allowing women members for the first time in its 260-year history. The club has 2,400 global members who were entitled to vote and more than three-quarters took part in the ballot. Of those that voted, 85% were in favour of change. I should think so too! 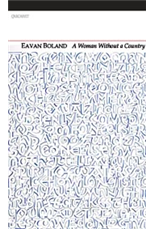 An hour programme called Four Women Poets Today, which features Carol Ann Duffy, Gillian Clarke, Eavan Boland and Liz Lochhead, will be aired on BBC Radio Four tomorrow, on Sat 20th Sept at 8pm. Eavan Boland is a Carcanet author who is celebrating her 70th birthday on 24 September and Carcanet have published two new books by her to celebrate this. A Poet’s (978 1847774477 £7.99, pb) which collects her greatest poems, and a long-awaited new collection, A Woman Without A Country (978 184777 217 6, £9.95, pb). There will be piece on Evan Boland in the Guardian shortly, and Colm Toibin is doing a big piece on Eavan’s books and birthday in the Irish Times on September 20. You can find out more and order Woman without a Country here.

Now you may remember last week I mentioned a new publisher who we are very pleased is joining the Compass family: Red Planet Publishing. This is a publisher of some tremendous music books; last week we told you about The Popmaster Quiz Book which is out this month. 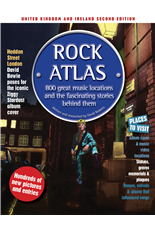 The Rock Atlas: 700 Great Music Locations Throughout the UK and Ireland and the Stories Behind Them by David Roberts features landmark album cover locations plus gravestones, plaques, recording locations, statues and sites of loads of famous and infamous gigs. This is the new revised second edition of this title, which features more than 70 per cent new or revised entries, more than 120 great new photographs – many of them never seen before and more than 70 new interviews. The cover is fab – it’s the hand-tinted David Bowie Ziggy Stardust album image, which Red Planet has exclusive use of. The book contains hundreds of rare and unseen pics including Cream, The Beatles, The Rolling Stones, Byrds, Jimi Hendrix, and many more! The Rock Atlas by David Roberts (pb, 978 1905959570 £19.99) is published in October by Red Planet and you can find out more and order it here.

Today is International Talk Like a Pirate Day, and in the absence of any suitably piratical themed books, I could have brought you Top Ten Pirate Movie Scenes, or even Top Ten Moments from Pirates of the Caribbean. But better than that I feel has to be this first ever episode starring the most fearsome pirate of them all! If you have no desire to talk like a pirate, but would prefer instead that your diction were more like that of her Majesty the Queen; then you’ll be needing two new titles coming in November from Hesperus. The Gentleman's Book of Etiquette and Manual of Politeness, by Cecil B Hartley (pb, 978 1843915416 £7.99) and The Ladies Book of Etiquette and Manual of Politeness, by Florence Hartley (pb, 978 1843915423, 7.99) were first published in 1860 and are now available in two beautiful packaged, flapped paperbacks with a nostalgic style. If the correct rules of etiquette fail you, never fear for these handy guides will instruct you in the correct manner! These indispensable nineteenth century guidebooks will entertain, educate and inspire and although first published in 1860, the witty and useful advice on behaving well often still rings true down the ages. You don’t need to live in the nineteenth century to agree with Hartley that it is rude to finish someone else’s jokes. 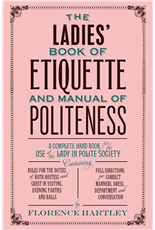 Whatever the situation, whether the reader would like to know how to be as ladylike as possible when seasick or the best colour schemes for bridesmaids’ dresses, these thorough and wide-ranging books will provide sensible and succinct guidance on how best to behave, and indeed how not to behave, as well as shed light into life in the nineteenth century. They are a veritable mine of information and indispensable advice for aspiring ladies and gentlemen!
Order the Gentleman's Book of Etiquette here and The Ladies Book of Etiquette here 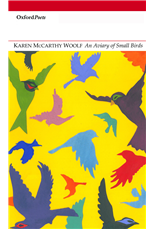 An Aviary of Small Birds by Karen McCarthy Woolf (pb, 978 1906188146 £9.95) was launched this week with a part in by Carcanet. This is a debut collection of elegiac poems which address the author’s baby son who died in childbirth. McCarthy Woolf is a major figure in poetry today: a mesmerising performer, a book re viewer, and an anthologist. She has taught poetry widely, notably at Southbank Centre. She has advocated for poetry on BBC News 24, been a PBS Pamphlet Choice judge, read at prestigious venues including the Poetry Society and she has a popular Twitter page. An Aviary of Small Birds has a truly beautiful jacket, and you can find out more and order it here. 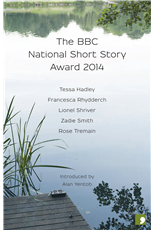 Writers Zadie Smith, Lionel Shriver and Rose Tremain join Tessa Hadley and Francesca Rhydderch on an all-female shortlist for the BBC National Short Story Award 2014.It is the second year in which the prize has featured an all-women shortlist. Smith's story, Miss Adele Amidst the Corsets, follows an ageing American performer as she shops for underwear. Tremain's The American Lover is an woman's recollection of a "disfiguring love affair". Shriver's Kilifi Creek looks at a gap year traveller's encounter with morality, while Hadley's Bad Dreams captures the moment a child discovers the unease behind her home life. Rhydderch's The Taxidermist's Daughter centres around the emerging sexuality of a young girl in post-war Wales.The stories will be broadcast on Radio 4 next week from 22nd September by actors including Carey Mulligan and Rebecca Hall, with interviews with the writers on Radio 4's Front Row. The winner will be announced live on Front Row on 30th September, and the five stories are published in a collection by Comma Press: The BBC Short Story Award 2014 (pb, £7.99, 978 1905583676). Alan Yentob, chair of the judges, said: "The enthusiasm of writers, both established and emerging, is very much in evidence in this, the ninth BBC National Short Story Award. With the quality and diversity of the work submitted, it has been a pleasure and a challenge to serve as this year’s chair."
You can order the BBC Short Story Award here

And in honour of today’s momentous news, I’ll leave you with a bit of Bay City Rollers to finish! Superb!

This blog is read weekly by over 700 booksellers as well as publishers and publicists. If you would like to order any of the titles mentioned, then please click here to go to the Compass New Titles Website or talk to your Compass Sales representative.
Posted by Compass Rose at Friday, September 19, 2014