Hello booksellers! After the extraordinary events of last night and this morning, and bearing in mind that Compass Points (like many of you no doubt!) has been up for half the night; we will keep today’s newsletter an election free zone! 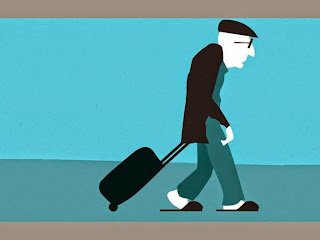 We love these literary lists don’t we – so who do you think are the top ten pensioners in literature? If I say “All we have to decide is what to do with the time that is given us” or even “Bah humbug” that might give you a clue? Well, I’m pleased to tell you that our own Compass Points favourite Allan Karlsson has also made the grade – he is of course the star of the Hesperus title The Hundred Year Old Man Who Climbed Out of a Window and Disappeared!
Have a look at the whole entertaining list here! 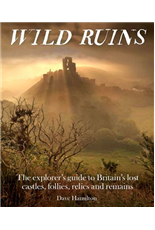 Who doesn't love a wander round a ruin? Wild Ruins: The Explorer’s Guide to Britain’s Lost Castles, Follies, Relics and Remains by Dave Hamilton (pb, 978 1910636022 16.99) is published by Wild Things Publishing in June, and explores ’s extraordinary history through its most beautiful lost ruins. From crag-top castles to crumbling houses in ancient forests, and ivy encrusted relics of industry to sacred places long since returned to nature; this is ’s first guidebook to ’s ruins. It contains detailed instructions on how to visit and gain access to over 250 hidden, wild or lesser known places with 28 maps and the stunning photography for which the Wild Things series is known. This title has a very wide family appeal; cutting across generations and bringing history alive and it will also appeal to walkers and history buffs. It has an introduction by Tony Robinson of Channel 4’s Time Team.
Find out more and order Wild Ruins here 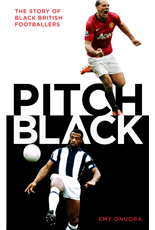 Make sure you capitalise on the colossal amount of coverage that’s has been given this week to Pitch Black: the Story of Black British Footballers by Emy Onuora of which the New Statesman has said “Pitch Black is not merely a valuable addition to the literature in this field, but vital … the author has produced an account that is both fluent and illuminating.” Emy Onuroa has been on just about every TV, radio station and newspaper talking about this book, including ITV Good Morning Britain, BBC News, BBC Sports News, Radio 5 Live, The Guardian, the Mirror The Independent, Sky Sports, The Times, The Telegraph, The Independent, The Sun, Daily Mail , ITV News and the Daily Star plus tons of local coverage too. Pitch Black is a frank, controversial and often highly critical appraisal of the response to racism by football authorities and the media. It is an important book on the history of black footballers in the English game, their historic and existing struggles, and the way both the game and society has changed; relating how profound changes in attitudes have come about. Emy Onuora charts not only the challenges faced historically by black footballers (the poisonous stereotypes, the monkey chanting, the throwing of bananas, the bullets in the post) but also examines their changing roles in the game, using interviews with over thirty current and former professional footballers. Pitch Black: the Story of Black British Footballers by Emy Onuora (hb, 978 1849548144, 17.99) is published by Robson Press and is available now. 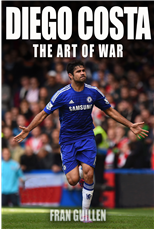 Still on the subject of footie, you may be pleased – you may be cross – or you may be totally indifferent to the fact that has now won the premiership; but whatever your personal feelings on the matter, there is no denying that one of their star players, Diego Costa, is one of the most popular footballers in the world. Coming in July is the first biography of him in English. Diego Costa: The Art of War covers every aspect of Costa’s career, from growing up in , to the fallow years when he learned his trade and then his astonishing impact on world football over the past two years. There are over 80 interviews, including big names such as Vicente Del Bosque, Cesc Fabregas, Sergio Ramos, Koke and more and the authors is a respected Spanish journalist who has followed Costa’s career for many years. You have had great success with many of our footie titles, and this title will also have huge appeal to British football fans, and also the global fan base of the English Premier League. Diego Costa: The Art of War by Fran Guillen (pb, 9781909715295 £14.99) is published by Arena and you can find out more and order it here.

And if you’d like to see this somewhat controversial star in action – watch six minutes of Costa craziness here! 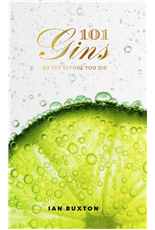 Well, I’ve promised to keep this an election free zone, but there’s no two ways about it; there will be plenty of politicians (and ex-politicians) who will be reaching for a nice big gin and tonic come this evening. In fact north of the border they might well be reaching for the whisky bottle instead – a good time to remind you that you booksellers have now sold over 40,000 copies of 101 Whiskies to Try Before You Die in the . Coming in August is 101 Gins to Try Before You Die – by the same author Ian Buxton. Gin has undergone a huge growth in popularity in the past decade, with new brands, distinctive flavours, innovative techniques and a proliferation of artisan distillers. 15 micro-distilleries started last year alone and gin festivals are springing up all over the country -  gin appeals to as many women as men and a to a very wide age group. 101 Gins to Try Before You Die is the first book to explore the explosion of innovative brands and is a fascinating guide to classic and new gins, which includes tasting notes and tips on how best to enjoy them. 101 Gins to Try Before You Die (hb, 978 1780272993 £12.99) is published by Birlinn and you can find out more and order it here

And now seems to be the ideal moment to listen to Snoop Dogg’s top ten hit,  Gin and Juice don’t you think?

Moving onto a rather different sort of music; The Hollies are an English rock group known for their pioneering and distinctive three part vocal harmony style who became one of the leading British groups of the 1960s (231 weeks on the UK singles charts during the 1960s; the 9th highest of any artist of the decade) and into the mid 1970s. Coming from Red Planet is The Road is Long: The Story of the Hollies by Brian Southall. Surprisingly this is the first ever biography of one of the sixties and seventies biggest British bands – who have a very strong fan base and still touring. Former band member and superstar Graham Nash (who left the group in 1968 to form the supergroup Crosby, Stills & Nash) has contributed to the book, and I think this could do rather well. Just to remind you, the Hollies’ Sixties hits included: Just One Look, Here I Go Again, Carrie Anne and of course He Ain’t Heavy He’s My Brother. The 70’s hits included Long Cool Woman in a Black Dress; and The Air That I Breathe and the band’s work is also included on many TV advertised compilation albums. The Road is Long: The Story of the Hollies (pb, 978 1 9059 5976 1, £15.99) is published in June and you can order it here.

And here they are, singing one of their most iconic songs! 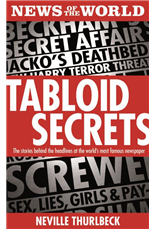 Tabloid Secrets: The Stories Behind the Headlines at the World’s Most Famous Newspaper by Neville Thurlbeck (hb, 978 1849548533 £14.99) is published this month by Biteback, and there is going to be plenty of publicity for it. This scandalous, swashbuckling insight into some of the biggest and most sensational scoops on Fleet Street includes an analysis of the phone-hacking scandal and the Leveson Inquiry. Neville Thurlbeck served up some of the most famous, memorable and notorious headlines in the paper’s existence; including names such as David Beckham, Jeffrey Archer, Fred and Rose West, Gordon Brown and Robin Cook, among many others. In Tabloid Secrets, he reveals for the very first time how he broke the award-winning stories which thrilled, excited and shocked the nation, and secured the paper up to fifteen million readers every week. This book is a real page turner and the publicity for it starts with an interview on This Morning on Tuesday 12th May, an interview in the Observer on 18th May – and there will be lots more to come…
Order it and find out more here 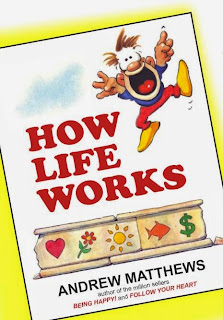 Last Buzz Feed literary list of the day – how many of these terrific book-to-film adaptations have you seen?

This blog is taken from a newsletter sent weekly to over 700 booksellers as well as publishers and publicists. If you would like to order any of the titles mentioned, then please click here to go to the Compass New Titles Website or talk to your Compass Sales representative.
Posted by Compass Rose at Friday, May 08, 2015