September is traditionally the time of year for new beginnings – and if you or your customers are thinking about starting a whole new career writing books rather than selling or buying them; then you’d better make sure you’re stocking these two essential titles by David Quantick. David Quantick is an Emmy-winning television writer who has written for television in the USA (Veep) and the UK (The Thick Of It, Brass Eye, Harry Hill's TV Burp), and is also a radio broadcaster (The Blagger's Guide, 52 First Impressions), an author and a journalist who's written for over 50 different publications, from the Daily Telegraph to The Dandy.

How To Be A Writer: Conversations with Writers about Writing (978 1783199037, pb, £14.99) was published this spring and is a collection of interviews with famous writers, performers and industry insiders that takes the reader through a writer's day, from getting up to giving in. And, along the way, asks: When do you get ideas? When should you write? How do you deal with your money? Who do you have lunch with? And how do you keep going? It includes talks with Caitlin Moran, Emma Donoghue and Mark Billingham and readers have described it as “Very honest, informative and inspirational” and “hilarity combined with wisdom”.

David’s earlier bestselling title How to Write Everything (pb, £12.99, 978 1783191031) is also essential in any bookshop – it’s the ultimate writer's handbook telling you about every aspect of writing, from having an idea to getting the idea out into the world and getting paid for it, too. It covers everything from journalism to screen-writing, from speeches to sketches, from sitcoms to novels. Jonathan Coe called it “Clear, kind, funny, and full of good advice. There’s nobody better to provide it than David Quantick, who in writing terms is the quintessential jack of all trades and master of...well, all of them actually.” Both titles are published by Oberon Books – great covers!

Incidentally, Oberon Books, celebrates its thirtieth anniversary this month – many congratulations to them! Publisher James Hogan, founded the company in 1986 with only £50 in his pocket and thirty years on the company has now grown to a staff of 10, across editorial, production, sales and marketing, publishing over 100 titles a year. His vision was to raise the standard and profile of published new plays and encourage mainstream bookshops to stock them. Oberon is now the leading publisher for drama and the performing arts, and the list has broadened to include books on theatre practice, biographies and successful arts titles. It has also entered into a successful association with the Royal Opera House and the Royal Ballet, which has resulted in a number of prestigious illustrated titles. One of James’ priorities was to upgrade book production standards by commissioning original artwork from artists and illustrators. James Hogan says: “New writing spurred me into publishing. 30 years ago, too many good plays disappeared after the first production. I set out to change that, and new writing from all over the world is still the soul of Oberon. It’s been a struggle, but I get my reward from that magic moment when writers realise that their work will be available for a long time to come.’’ The thirtieth anniversary celebrations will start on 25 September 2016 with a party for authors and staff and continue with activities on the Oberon website and offers to book buyers and consumers. Have a look at their website to find out a bit more: www.oberonbooks.com 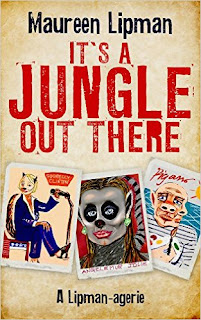 It’s a Jungle Out There: A Lipman-agerie (978 1785900969, hb, £12.99) is a rather unusual and sumptuously illustrated book from actress and author Maureen Lipman in which she presents a dizzying array of celebrity/animal paronomasia (Greek for mash-ups)! It started when Maureen drew a doodle of a doodle of a large animal in a dinner jacket, to which she gave a green carnation and named Oscar Wildebeest. After this breakthrough moment, Maureen became obsessive, boring friends and family with her latest creation. 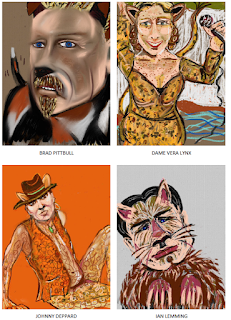 When she woke at 3 a.m. and said out loud, “Tuna Stubbs!”, the die was cast. A book was born. Here you will meet Brad Pitbull and Ange-lemur Jolie; Johnny Deppard and Jake Gorillanhall; Lu-seal Ball and Andy Warthog; Joan Crow-ford and Vanessie Redgrave, among many others. This perfect gift book for Christmas is a wry and witty look at celebrity life through the febrile imagination of one of our most celebrated and best-loved actors with the aid of with the aid of a fertile mind, a keen sense of humour and, oh yes, her trusty iPad. 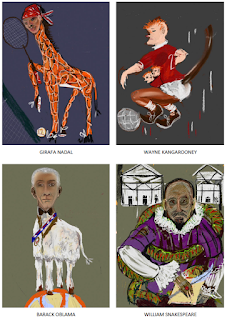 Maureen Lipman will be much in demand by broadcast media on publication – the book will be serialised in the Mail on Sunday, there will be lots of magazine coverage including Women’s Weekly, and Maureen will be appearing on BBC Breakfast on 19 September and also on ITV’s Loose Women. 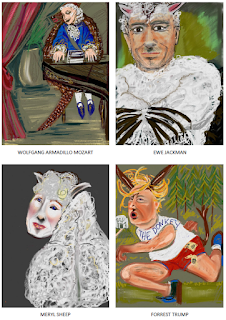 Sharp, funny and endlessly inventive, lt's a Jungle Out There presents a dizzying array of stars as you've really never seen them before; this otterly brilliant collection is guaranteed to quack you up. It’s a Jungle Out There: A Lipman-agerie by Maureen Lipman is published on 22 September by Robson Press.


And have a look here to remind yourself of Maureen Lipman’s hilarious performance in the famous BT ads – well I say remind yourself, some of you were probably not even born – can you believe this one was first aired 28 years ago!!! 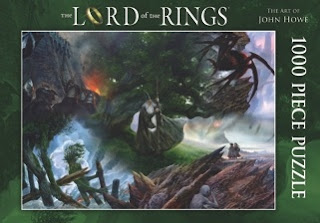 Something a bit different – two superb new 1,000-piece jigsaws which are available on 4 September from Galileo. The Lord of the Rings Jigsaw is illustrated by John Howe who is widely recognised as the premier artist interpreting JRR Tolkien’s masterpiece. He has painted book covers, calendars, board games, posters and was the art advisor on all Peter Jackson’s highly successful movies. This jigsaw is a superb collage of John Howe’s art from the hugely successful board games he illustrated for Sophisticated Games and the complex and intricate picture will appeal to both Tolkien fans and regular jigsaw puzzlers. 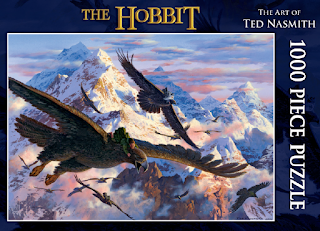 The Hobbit Jigsaw features one of Ted Nasmith’s finest Tolkien paintings entitled Bilbo and the Eagles which appeared previously on the best-selling board game of The Hobbit. It is a beautiful picture, which again will greatly appeal to both Tolkien fans and regular puzzlers. You can also order the Beautiful Britain Jigsaw by Phil and Glyn Martin which was published earlier this year – it has a really lovely collage image on it featuring scenes from all over Britain – have a look on the blog to see it. The pictures are painted from actual locations and the collage has been assembled from these paintings especially for this jigsaw puzzle – it is not available elsewhere. 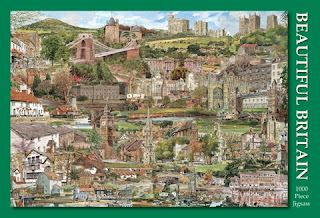 We all love wordplay and puns right? Who has a number plate that, shall we say, reflects their personality? Maybe the one you wanted wasn’t allowed – have a look here  at the licence plates that are banned by the DVLA for being just too rude! 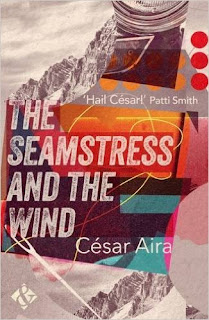 Congratulations to César Aira who has just won this year's $60,000 Manuel Rojas Prize. His newest title The Seamstress and the Wind (978 1908276841, pb, £7.99) was published in July by And Other Stories – and had a great review this week in the Financial Times who called it “Bewitching and bewildering . . . Compulsively readable . . . Aira’s writing – with its equal measures of rich complications and airy whimsies – combines brevity with so many possible meanings, or none.” The Guardian said it was “surreal and intriguing . . . a drama is as fun as it is mystifying.” And other rave reviews have come from the Scotsman: “A work of literary trigonometry. The prose bounds along with a gleeful spring in its step, dragging the improbable story behind it . . . If you’re happy to have your buttons pushed, then you’ll fall for this shaggy-dog-story-on-shrooms, and fall hard” and the Big Issue: “Funny, poetic and wonderfully readable . . . Idiosyncratic and vivacious, The Seamstress and the Wind reads more like an afternoon in the pub with a dreamy Eddie Izzard than a sit-down session exploring prose form with Eimear McBride, and is all the better for it.”

Lots of you will probably enjoy this amusing list over on BuzzFeed of the top upsetting remarks that book lovers have to deal with! 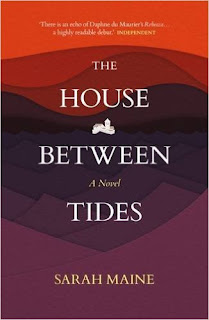 A great piece in the Daily Record about The House Between Tides by Sarah Maine, which has just been published by Freight. Headed Scottish novel takes America by storm with debut novel after rejection in the UK, it describes how the book attracted a fierce bidding war in the US where Harper Collins compared it to Rebecca, while Simon and Schuster compared Sarah Maine to international bestselling Australian author Kate Morton. Simon & Schuster’s American imprint, Atria, won the bidding war and gave her a substantial five-figure deal. The novel has been out for only two weeks to rave reviews and sales have been so good there has already been a reprint in the US. Sarah Maine’s agent, Jenny Brown, described the novel as “a true success story – a Cinderella story.” You can read the whole article here . Adrian Searle, the publisher at Freight says “London publishers will deny it, but they are prejudiced against novels set in Scotland and against Scottish writers. They think they are too regional and turn their noses up at them but … Scottish independent publishing is in rude health!” The House Between Tides is a beautiful debut novel set in the Outer Hebrides, which strips back layers of the past to reveal a dark mystery. In the present day, Hetty Deveraux returns to the family home on a remote Hebridean island estate following the untimely death of her parents. Torn between selling the house and turning it into a hotel, Hetty undertakes repairs and accidentally uncovers human remains. Who has been lying beneath the floorboards for a century? Were they murdered? Through diaries and letters, Hetty discovers that the house was occupied at the turn of the century by distant relative Beatrice Blake… This is an utterly compelling historical mystery set in a haunting and beautifully evoked location and you can order The House Between Tides (pb, £9.99, 978 1910449783 ) now – if the US can do so well with it then surely we can too!

And talking of the US, here's a rather heartening article from the New York Times as to why people still prefer printed books rather than reading them on a screen. Yaay!


And finally, if you think you are a bit of an expert on English spelling and pronunciation, then have a look here at a poem entitled The Chaos by Gerard Nolst Trenité, written nearly 100 years ago in 1922, to demonstrate the irregularities of our glorious language! And if you’re still struggling, then watch here to hear it read correctly on YouTube!


This newsletter is sent weekly to over 700 booksellers as well as publishers and publicists. If you would like to order any of the titles mentioned, then please talk to your Compass Sales Manager, or call the office on 020 8326 5696.
Posted by Compass Rose at Friday, September 02, 2016