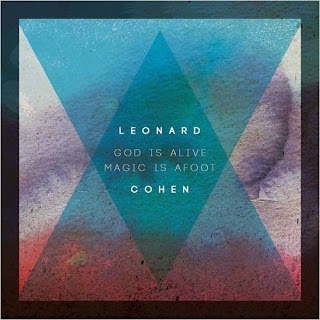 What sad news we woke up this morning to about Leonard Cohen. There is bound to be a resurgence of interest in all of Cohen’s work, so don’t forget an extraordinarily powerful and thought-provoking little book: God is Alive, Magic is Afoot (£8.99, hb, 978 1903385135) which is available in from Galileo. When Beautiful Losers, Leonard Cohen's legendary second novel was published in 1966 it was described by The New York Times as “gorgeously written...overwhelming”. In the middle of this novel comes a section beginning with the words God is Alive. Magic is Afoot, a powerful anthem in the vein of Cohen's classic Hallelujah. The 400 or so words that follow are arguably some of the finest that Cohen ever wrote. In them he weaves an intricate web connecting God and Magic, which leaves the reader wondering where one ends and the other begins. Readers have described this reflective text as “Leonard at his best. A book to read in those quiet moments of relaxation.” “A unique publication. Beautifully presented and easy to read” and “a gorgeous book to have and to hold. It’s a lovely meditation from the wonderful being that is Leonard Cohen.” God is Alive, Magic is Afoot is an insightful mantra that cannot fail to move the reader and it is available to order today.
You can hear a five-minute recording of  Leonard Cohen reciting this beautiful piece here. 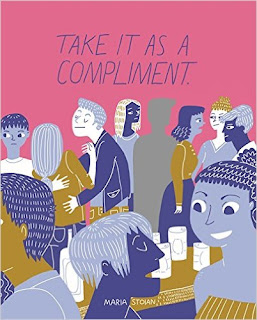 We’re absolutely thrilled to be able to tell you that Take it as a Compliment (978 1849056977, £15.99, hb) by Maria Stoian has just won Best Graphic Novel at last night’s 2016 British Book Design Production Awards. Bringing together the voices of males and females of all ages, the stories in this collective graphic memoir reflect real life experiences of sexual abuse, violence and harassment. Each experience is brought to life by Maria Stoian's exceptional artwork. Her unique and varied styles powerfully reflect the tone and mood of the different stories and in just a few pages express the complex emotions felt by victims of sexual abuse. Covering acts such as sexual violence, public sexual harassment, domestic abuse and child abuse, this is a reminder for survivors that they are not alone and a call for all of us to take action. The stories clearly show that assault of any type is not an honour bestowed on anyone. It is not a compliment. Below are some spreads for this remarkable and important book – it has already won the Gold Medal in the Independent Spirit category of the Independent Publishers Outstanding Book of the Year Awards 2016, and definitely deserves to have a wider readership. It’s published by Jessica Kingsley. 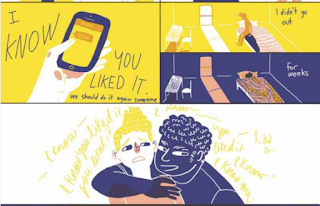 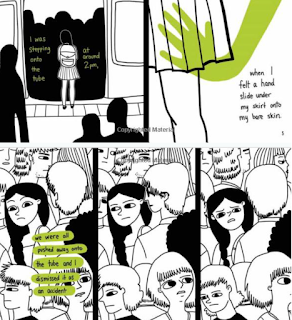 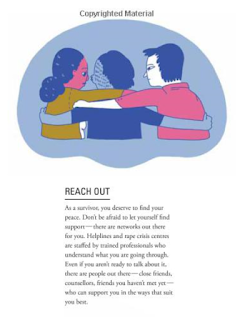 Want to leave the bookshop world behind and get into publishing instead? Here's how! 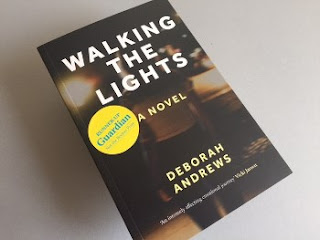 Deborah Andrew’s brilliant debut novel, Walking the Lights (pb, £9.99, 978 1910449882) published by Freight about a young drama graduate’s attempts to forge a career as an actor while coming to terms with her past, is the runner-up in the Guardian’s Not the Booker Prize 2016. Chair of the Judges, Sam Jordison, said, “It feels like an authentic - and suitably daft - evocation of that lost era of Blairite optimism and post-rave partying... vivid and convincing… the delight of this novel is that its protagonists are older, if no wiser, and their party lifestyle is engagingly related… it’s got heart.” Game of Thrones actor Kate Dickie said of the book “Oh my, I love this first novel from Deborah Andrews. A story of quiet devastation, of a life half-lived, of lies told and truths uncovered. I laughed and cried in equal measures, I couldn't stop reading, yet dreaded it ending. Honest, beautiful and visceral, Andrews's prose catches your breath and snags the air around you. I can't recommend it enough” and it has had many other very positive reviews.

Have a look here on BuzzFeed to see a round-up of tweets from authors with their views on the US election result. Which author said “winter is coming” I wonder… 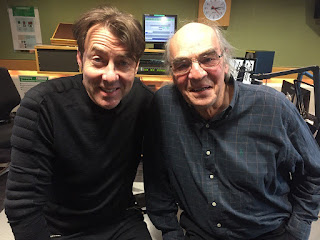 Do tune in to BBC Radio 2 tonight to hear Nick Perry talking about his new title Peaks and Troughs: In at the Deep End, High in the Hills (hb, £14.99, 978-1846973659) with Jonathan Ross. There have been some terrific window displays for this title which is a warm-hearted, humorous and ultimately inspirational tale of a young man's attempt to run an organic farm in the unforgiving Welsh hills.  You can see it here in Waterstone's Piccadilly and also in the Yellow Lighted Bookshop in Tetbury. It’s out now from Polygon! 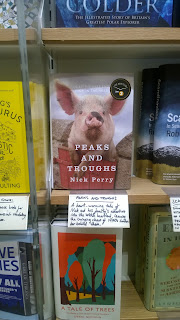 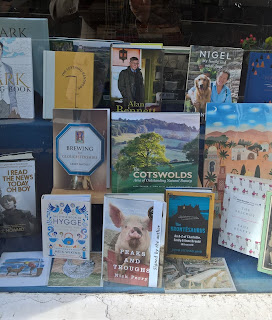 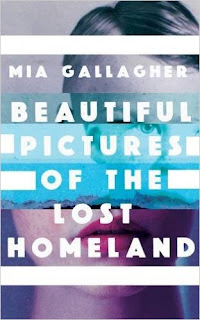 Congratulations to New Island, And Other Stories and Freight who are among the small presses that have been longlisted for the Republic of Consciousness Prize. The prize was launched earlier this year by author Neil Griffiths and seeks to find the "best novel published by a small press". Discussing the judging criteria, Griffiths said: "We weren’t just looking for great novels but ‘hardcore literary fiction and gorgeous prose'." Treats by Lara Williams published by Freight is on the longlist as is Beautiful Pictures of the Lost Homeland, “a long polyphonic novel" by Mia Gallagher published by New Island and Martin John, a "a darkly comic novel" by Anakana Schofield from And Other Stories. Griffiths said of this novel: “Martin John struggles with an impulse towards public sexual exposure, and we are witness to his life in a novel of formal ingenuity that embraces poetry, plainchant, monologue, memory and dream. Anakana Schofield is a novelist of very rare gifts and this is a singular achievement.” Go to the Bookseller page here  to see the full longlist of sixteen novels. 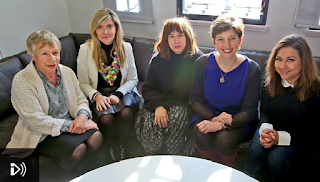 Talking of Anakana Schofield, who heard her brilliant appearance on Woman's Hour to discuss Martin John recently?  She was absolutely superb reading her novel and talking about why uncomfortable truths have to be spoken – have a listen here  - you can go straight to the right bit by using the Chapters feature on the page. 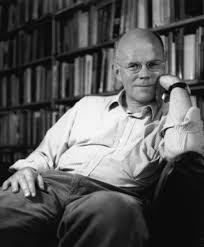 Interesting to read Carcanet MD and founder Michael Schmidt in The Bookseller talking about the US election result. He worried the result would introduce an “atmosphere of anti-intellectualism that will be very damaging for the cultural sector. It will lead to a society that is hostile to exchanges of ideas and knowledge in favour of exchanges of materials and goods,” he said. “The result, like Brexit, will lead to insularity and will certainly further increase uncertainty in the market.” You can read the whole piece – with lots of other reactions from the UK book trade –  here.
And if you’re still able to laugh about life – then have a watch of this We haven’t seen any Epic Rap Battles of History recently: this one of Trump vs Clinton was released two weeks ago – very funny and rude! 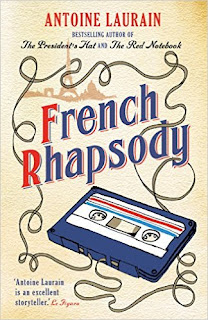 Antoine Laurain’s latest novel French Rhapsody (pb, £8.99, 978 1910477304) published by Gallic has received great reviews in the national press. The Daily Mail called it “Beautifully written, superbly plotted and with a brilliant twist at the end” while the Sunday Times said “The novel has Laurain's signature charm, but with the added edge of greater engagement with contemporary France.” Sainsbury’s Magazine enthused “This gem blends soft humour and sadness with the extraordinary” and Woman and Home praised it as “witty, nostalgic – I was completely charmed”. Heat magazine will include the book and Antoine Laurain in a travel reading feature on 15th November – make sure you have plenty of copies of this engaging novel on display as it is the perfect gift for anyone who loves a clever and charming read, and this author’s popularity continues to grow. 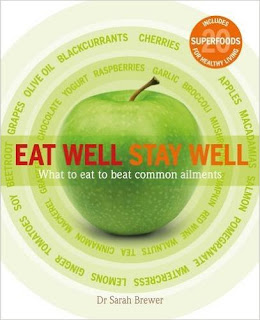 A great piece (below) on Eat Well, Stay Well (£12.99, pb, 978 1859063712) this week in the November issue of Eat Healthy magazine. Nutrition is our first line of defence against disease and a well-chosen diet can alleviate and help prevent just about any health condition. In this book, Dr Sarah Brewer reveals what to eat to beat fifty common ailments, based on the principles of nutritional medicine. From high blood pressure to eczema, and osteoarthritis to depression, find out what you should and shouldn’t be eating to give your health a fighting chance. With tasty recipes to try, plus advice on key superfoods offering all-round health benefits, Eat Well, Stay Well (which is published by Connections) shows you how to eat your way to staying healthy and happy as you age. 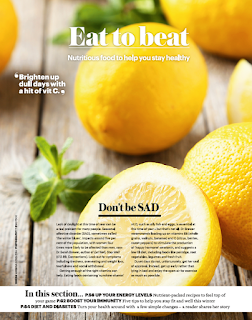 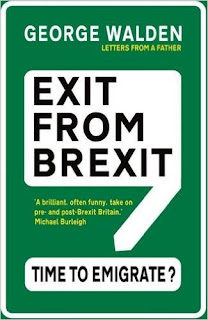 Exit from Brexit: Time to Emigrate? Letters from a Father by George Walden (pb, 978 1783341221 £9.99) is, as Michael Burleigh called it:“A brilliant often funny take on pre- and post-Brexit Britain.” Stephen Vizinczey said “I could not put it down” while Simon Heffer praised it as “The best book I have read in a long time.” The book was mentioned in the Guardian this week – and there is a feature on it to come. Exit from Brexit: Time to Emigrate? is a wry and unflinching discussion of a Britain that is changing beyond recognition by the former Tory Minister and EU negotiator. For some time Brits have been leaving the UK in search of sunnier, less crowded lives abroad, with better prospects for themselves and their children. Will uncertainty about Brexit increase their number? In these wry, unflinching, lucid letters from a father to a daughter (Exit from Brexit) and a son (Time to Emigrate? written before and now updated), George Walden gives an unsparing yet persuasive portrait of pre- and post-Brexit Britain. Exit from Brexit is published this week by Gibson Square.
Some super displays of Mapping the City by Daniel MacCannell from Birlinn at Blackwell's in Oxford - all ready for its launch there on 14 November. 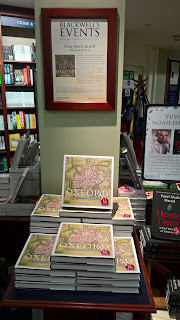 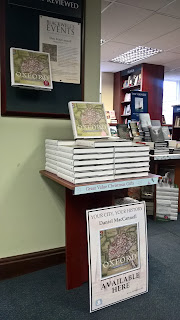 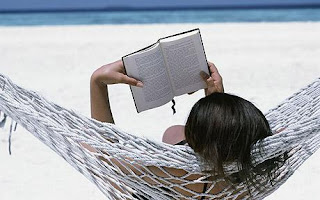 And if everything about Brexit and the US is just too stressful – well you could always try… reading. Yes, that’s right, a recent study has confirmed that reading one of the best ways to relieve stress; just six minutes can be enough to reduce tension by two thirds apparently: read about that here.
For this week’s entertainment from the weird and wonderful world of social media; we bring you a sample of the comments thread following the new John Lewis advert:

Crystal Walker A trampoline is not a good present when it's freezing outside.﻿
Ursa Your comments are so witty and dry I love it XD﻿
Signet Gold 'Hey kids look what i got you! a trampoline so you can freeze your tits off and get the flu!!!'﻿
Hullu Richie The UK doesn't get freezing temperatures.
Liam Mac Your wrong it has had minus 20° in recent years. brrrr!!
Emma Baker This is my favourite John Lewis advert so far; animals are my favourite! ❤️﻿
Liam Jones Who wants a trampoline in the winter.... unrealistic, at least the penguin was realistic.﻿
Thezec Actually I've seen videos of foxes jumping on trampolines before﻿.
Winston Broderick I can confirm that what actually happens when foxes and badgers find something new on their territory is that they carefully park a big old shit in the middle of it﻿.
King Without A Crown Why you didn't choose a white family, this is so racist!
Cirby Shottas My 7 year old daughter rabbits was killed by foxes... i hate this add.﻿
Andy Brice I'm no zoologist, but I'd guess it probably wasn't the same foxes.
Paul Godmund Foxes are not cute and cuddly like basil brush, they are wild animals and shouldn't be incouraged to come into gardens!
Speedbird Concorde So politically correct that I want to vomit.
Popalata Gaming I wish I hadn't read the comments.
That’s all for now folks! More next week!
This blog is taken from a newsletter which is sent weekly to over 700 booksellers as well as publishers and publicists. If you would like to order any of the titles mentioned, then please talk to your Compass Sales Manager, or call the office on 020 8326 5696.