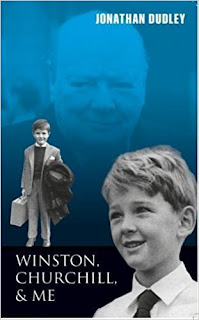 There is always demand for and interest in books about the Churchill family, so Winston, Churchill and Me by Jonathan Dudley looks set to sell strongly I feel. With echoes of The Go-Between, this short memoir tells the story of a young boy who is invited to stay with a school friend during the summer holidays and finds himself at Chartwell, the family home of Winston Churchill. Jonathan Dudley was eight years old at the time and was accepted into the Churchill family alongside his school companion, the young Winston, grandson of the former Prime Minister. Over two summers, the young boy observed the comings and goings of various members of the Churchill family and visiting statesmen, and over 60 years later, he recalls what he saw through the eyes of a child. The result is a collection of memories, some funny, some sad, some exuberant, some poignant, which together add up to a highly evocative and original sketch of Winston and Clementine Churchill at that time. Winston, Churchill and Me (978 1 911072195, £7.99, pb) is published in June by Skyscraper and contains black and white photos. This new, first-hand biography with its many vivid and readable extracts will provide good newspaper serialisation and is a touching and fascinating read.
It’s been a while since we had a look at the entertaining Epic Rap Battles of History – so this seems an ideal moment to watch at this one  – Winston Churchill vs Theodore Roosevelt! 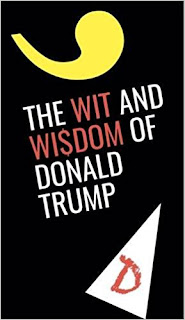 From one political giant to another, and as Donald Trump continues to entertain and appal us all in pretty much equal measure – don’t forget to keep a pile of The Wit and Wisdom of Donald Trump (pb, £5.00, 978 1911072157) also from Skyscraper by the till! A book which reveals the true vision and intellect of the US President; this book consists largely of blank pages, divided into sections under headings such as: How I will bring peace to the world; How I will heal the divisions in American society between racial, ethnic and lifestyle groups; How I will protect the rights of women; How I will demonstrate restraint, civilised behavior, and compassion; The major positive achievements of my business career; and The major benefits my presidency will bring to the USA. Great stuff!
And if you feel that actually, the Trumpster can genuinely come up with some witty wisdom for real – than you might enjoy this – a five-minute compilation of some of his best comebacks! 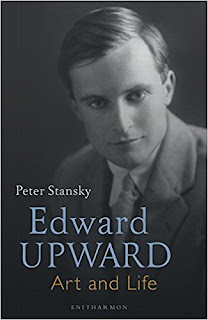 The novelist and short story writer Edward Upward (1903-2009) is the unsung member of the W. H. Auden circle, revered by his peers – Auden, Day Lew­is, Isherwood and Spender – for his intellect, high literary gifts and unswerv­ing political commitment. Edward Upward: Art and Life by Peter Stansky (hb, £20, 978 191039284) is a new biography of this influential member of the Auden circle, which is published in May by Enitharmon. This illuminating, meticulously researched biography tells the fascinating story of Upward’s conflict be­tween art and life and at the same time colourfully provides significant insight into English society during the twentieth century and explores the special na­ture of English radicalism. It was the lead review in this week’s TLS and there will be strong demand for this title as it is the first proper biography of Upward and contains many never before published photographs.
The New York Times published an interesting article about Edward Upward when he died in 2009 aged 105 – which you can read here. 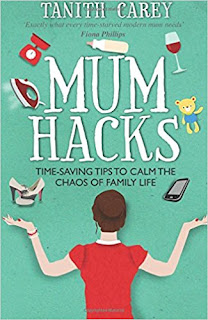 Mum Hacks: Time-saving Tips to Calm the Chaos of Family Life by bestselling parenting author Tanith Carey is getting some great pre publicity – look at this  fab piece in the Telegraph for starters. Using tried-and-tested advice, Tanith offers everyday shortcuts to allow busy mums plenty of quality time with their children, partner and even themselves! This book is for anyone who is trying to spend less time tidying, cleaning and washing and more time enjoying every day. Early reviews for this title on Amazon are extremely positive – this one is typical: “If you’re sinking under the daily struggle of wearing so many hats there’s not enough time to catch your breath let alone take a few minutes out, look no further than this book packed to the rafters with top tips to give you less stress and more time for family fun! I found some real nuggets of ideas to implement which are already working like a dream. Whatever you’re struggling with – from school runs to bedtimes, holidays to housework –  pick up a copy of this book today and there’s every chance your life will be just that little bit calmer and enjoyable as a result!” Mum Hacks (pb, £9.99, 978 1910336229) is published at the end of April by Crimson.
You can listen to a fun podcast from Tanith Carey about taming your inner tiger parent here and you can go to Tanith’s own website at www.tanithcarey.com
Now that Theresa May has finally triggered Article 50, Philip Jones considers what this means for the future of the book trade. You can read his views in The Bookseller here. 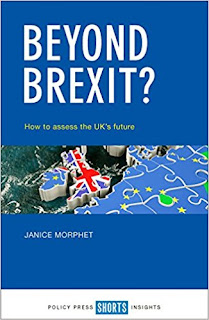 And as the negotiations begin in earnest, can I draw your attention to Beyond Brexit? How to Assess the UK’s Future by Janice Morphet (pb, 978 1 4473 3924 3, £ 9.99). This is an excellent short (128 page) paperback on a highly topical subject written by someone with wealth of knowledge on the subject: Dr Morphet is a Professor at the Bartlett School of Planning at UCL and has been chief executive of a local authority, a senior adviser on local and central government and is also an author, consultant and frequent speaker on Europe. Beyond Brexit? offers a new framework with which to assess and discuss the forthcoming talks and would be interesting to both professionals and policy makers as well as the general public – Janice’s clarity of thinking and her accessible writing style make this very readable. It has just been published by Policy Press.
And just to prove that we haven’t totally lost our sense of humour over the whole European issue, I think you will very much enjoy this hilarious compilation of insults from Blackadder – covering pretty much every nation! 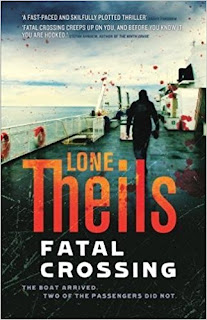 Who’d like to read an intelligent thriller blending Scandinavian noir with traditional British crime? Me, me, me! If you would too, then email nuala@compass-ips.london and ask for a reading copy of Fatal Crossing by Lone Theils (£8.99, pb, 978 1911350033) which is published on 4 May by Arcadia. This is a crime debut novel which has already sold more than 10,000 copies in Denmark, been translated into thirteen languages and featured prominently in the Danish bestseller charts. It has been described as “a fast-paced and skilfully plotted thriller” and “a candidate for the best crime novel of the year”. When a picture of two Danish girls who disappeared on a boat bound for England in 1985 emerges many years later in an old suitcase from a British second-hand dealer, the journalist Nora Sand’s professional curiosity is immediately awakened. But before she knows it, she is mixed up in the case of a serial killer who is serving a life sentence in a notorious prison and the quest to discover the truth about the missing girls may be more dangerous that she had ever imagined… Lone Theils (who is half Danish and half English) will be appearing in the UK around publication for events and Arcadia will be publishing the second title in the Nora Sand series, The Blue Poet’s Wife, in Spring 2018, so this is well worth supporting. 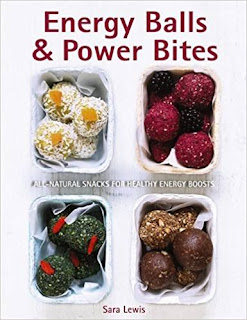 Energy Balls & Power Bites: All-Natural Snacks for Healthy Energy Boosts by Sara Lewis (978 0754833260, £9.99, hb) has just been published by Lorenz – and looks absolutely terrific! The photography is gorgeous; I don’t usually like to link to Amazon, but there are 11 spreads from this title on their website here which is probably the easiest way to view just how enticing the recipes in this book are. Energy Balls – quick, protein based healthy snacks to give you a boost – are a massive foodie trend at the moment, and this is by far the best book on the market.  Snacking on sugary or salty processed foods is not the healthy answer to tiredness or boredom as we all know, and Energy Balls & Power Bites gives you loads of nutrient-dense and tasty fatigue fighting snacks that are good for you too. Many can be made in a matter of minutes; others can be kept ready in the fridge and even freezer to pull out as you need. There are energy balls made with fresh dates, frozen berries and spirulina; wholegrain muesli bars; lime and chia bars; spiced apple bites; and pumpkin seed, almond and sour cherry bars, all packed with taste and goodness.
So, as we do like to finish with some music, let’s have the top ten songs about balls! Miley Cyrus? Jerry Lee Lewis? Have a watch here!
Compass is on Twitter! Follow us @CompassIPS. Here are some of our favourite tweets from this week …
Freight Books@FreightBooks Delighted Dilys Rose's Unspeakable is Waterstones Scottish Book of the Month for April, 'richly compelling' @scotsman_arts
Denis MacShane‏@DenisMacShane Just finished @willwainewright's "Reporting on Hitler. Have rarely enjoyed a book on journalists + reporting so much @IainDale @BitebackPub
Edward Peacock‏@brendonbronco Much liked the ingenious #ThePresidentsHat by #AntoineLaurain. Taste the French food, sniff the French perfumes! #Gallic
Matthew at Urbane‏ @urbanepub Congratulations to @GeorgeCostigan - The Single Soldier publishes today!
Lulu Allison‏@LRAllison77 Martin John by @AnakanaSchofield #AndOtherStories. In an age of careful neutrality, such #books make bold explorers of us all
Matthew at Urbane‏@urbanepub A great piece in @CumbriaLifeMag on @ggaffa 's new novel All The Places I've Ever Lived #BookBoost #Cumbria
Gallic & Aardvark‏ @BelgraviaB Love @madhatterbook display for Books of the Month, incl our v own Fiona Kidman's Songs of the Violet Café!
Biteback Publishing‏@BitebackPub“By the end of the book I was shaking with outrage” | Ann Widdecombe on @bbcsimonwarr's #PresumedGuilty
Freight Books‏@FreightBooks Great night at @Waterstones_Edi launch of Dilys Rose Unspeakable - 80 readers big signing queue live early music too!
Matthew at Urbane‏@urbanepub Thanks Bakewell Bookshop: Nothing better than the support of an independent bookshop!
CompassPoint@CompassIPS We couldn’t agree more!!
That’s all for now folks! More next week!
This newsletter is sent weekly to over 700 booksellers as well as publishers and publicists. If you would like to order any of the titles mentioned, then please talk to your Compass Sales Manager, or call the office on 020 8326 5696.
Posted by Compass Rose at Friday, March 31, 2017