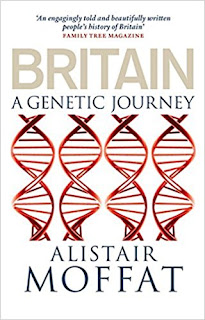 Who saw this intriguing piece in the Guardian, discussing the recent major gene study of humans in prehistoric Europe? This appears to show that although the men and women who built Stonehenge left an indelible mark on the British landscape; their input into Britain’s gene pool appears to have fizzled out, having been terminated by light-skinned Dutch invaders who arrived just as the ancient Brits were midway through their great project. Researchers now believe that all genetic traces of early Stone Age Britons were replaced by continental newcomers known as the Beaker folk, although work on Stonehenge continued. Two new titles explore this further: Britain: A Genetic Journey by Alistair Moffat (pb, £9,99, 978 1780274638) was published in April by Birlinn and is an epic tale: moving, astonishing and revealing. Instead of the usual parade of the usual suspects; kings, queens, saints, warriors and the notorious; this is a people's history of our kingdom, a narrative made from stories only DNA can tell which offers insights into who we are and where we come from. 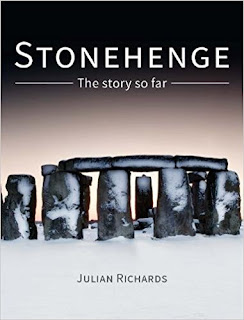 Out later in the summer from Historic England, is Stonehenge: The Story So Far (hb, £25.00, 978 1848021006) which is a sumptuous, beautifully illustrated and informative book, written in an accessible rather than an academic style by archaeologist Julian Richards, who has been involved with Stonehenge for over 35 years. Starting with a clear explanation of the structures that make up this enigmatic monument, this book charts the ways that Stonehenge has been seen, explored and understood since medieval times. Giants, wizards, druids, burials adorned with gold and the birth of archaeology all figure in this evolving story which brings the reader right up to date, including the results of the latest investigations and current ideas. Julian Richards takes a practical, critical and enlightening look at all the information and takes us into the minds and world of our prehistoric ancestors.
There’s quite a lot to choose from in terms of book, film and music references to our most famous monument! Maybe the ending  of Tess of the D’Urbervilles is the most famous literary reference – but I’m pretty partial to this  Doctor Who scene set at Stonehenge from a 2010 episode: The Pandorica Opens. But ultimately, you’ve just gotta love this scene from This is Spinal Tap! 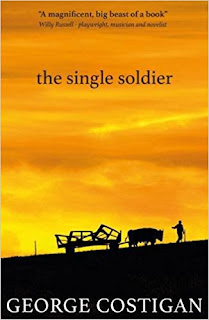 There have been some great reviews and articles about Urbane author and actor George Costigan and his compelling debut novel The Single Soldier (pb, £8.99, 978 1911331209) this week. Set in South Western France during the German occupation in the Second World War, this “beast of a book with a beast of a storyline” is “simply unforgettable.” “Heartbreaking and heart-warming this story contains history, war, passion and love and conveys how war can impact on even the rural of places and its inhabitants … so descriptive you feel you are actually there in France with the varied and diverse characters … intelligent and clever …a book I will return to again in the future.” 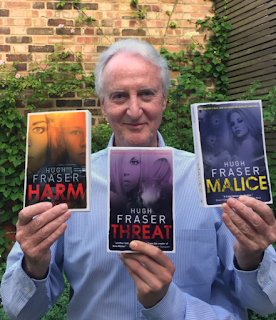 Urbane does seem to be the go-to publisher for actors-turned-authors as this month Malice, (pb, £8.99, 978 1911583066) the new page-turner from Hugh Fraser, is also published by them – and Hugh is of course aka the ever-fabulous Hastings to David Suchet’s Poirot. Malice is book three in the Rina Walker series, following Harm and Threat and is set in London 1964 in the world of gruesome gang warfare, racketeers and hoodlums. As one reviewer said: “Fraser captures the dark side of the 1960's underworld and the fabulous energy of that decade with a glorious attention to detail” and these taut, explosive thrillers are really building up a following.
Let’s enjoy this fun little five-minute compilation of Hugh Fraser back in his Poirot days shall we?! Good Lord! 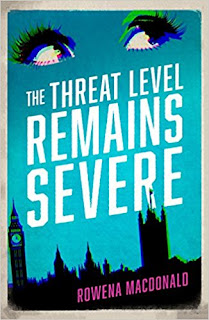 In what’s going to be a period of intense political argy-bargy here in the UK we’ll all need some light relief and it’s great to see that Rowena Macdonald’s debut novel The Threat Level Remains Severe (978 1910709153, £8.99, pb) has been picked as a Best Summer Beach Read by Red Magazine. They’ve described it as a “quirky rom-com set in the House of Commons… this one gets my vote.” You can see the whole review here.  It’s published on 10 July by Aardvark Bureau. 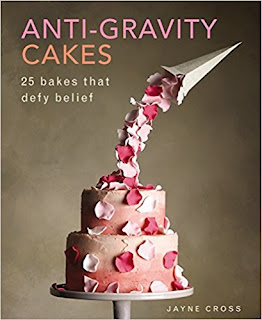 Anti-Gravity Cakes: 25 Bakes That Defy Belief by Jayne Cross (hb, £9.99, 978 0754833017) has just been published by Lorenz – you can see pictures below of some of these sensational cakes that don't make gravitational sense! Awe-inspiring and often amusing, this title shows you (with full colour spreads and easy step by step instructions) how to create these show-stopping conversation pieces, which of course also taste delicious! Here you will find surprises such as a suspended tap over a bubbling bathtub full of yellow ducks, a watering can pouring over pretty edible flowerpots, a shower of cascading sweeties and a gift-wrapped box being ribbon-tied by a bluebird. It’s just been featured in the Manchester Evening News (which is syndicated to all the other regional Trinity Mirror papers) and in the June issue of Cake Masters magazine who said "We simply love the creativity and fun that this book surprises us with from every design." Agreed! 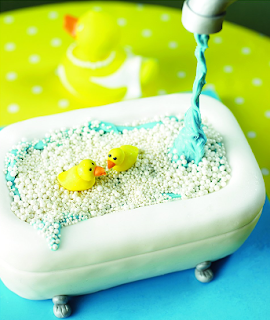 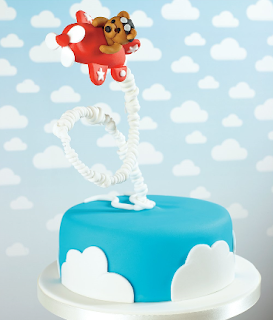 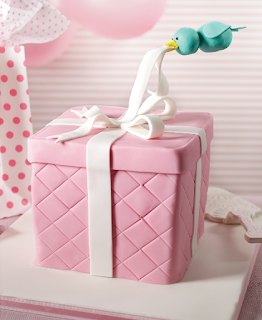 An interesting article here this week in the Times Educational Supplement about why primary schools need to embrace picture books in order to improve literacy standards. 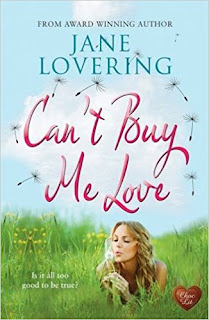 There was a super piece this week in the Northern Echo about how bestselling Choc Lit author Jane Lovering still “absolutely loves” working on the check-out in her local Co-op in Rydale, North Yorkshire. Jane won Romantic Novel of the Year five years ago for her debut book, and her twelfth book has just been published. Can’t Buy Me Love (pb, £7.99, 978 1781893531) is another funny and charming romantic comedy from this very popular author – it has a great summery cover and you can find out a bit more about Jane and her books on her website and blog at www.janelovering.co.uk. 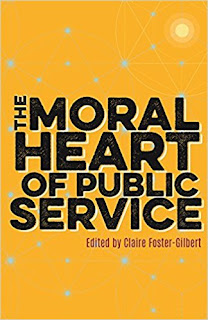 As politicians here in the UK vie frantically to win our hearts and minds – and the Trumpster continues to make ever more ethically dubious decisions – there could not be a more pertinent title than The Moral Heart of Public Service edited by Claire Foster-Gilbert (£18.99, hb, 978 1785922558) which is out from Jessica Kingsley on 21st June. As Times columnist Matthew Parris said recently: “We live in an age when noisy moralism is everywhere, and the news and social media have invaded the pulpit. Quiet reflection on moral truth, however, and the noble sobriety of public administration, have become under-valued virtues. All power to a book like this in redressing that imbalance.” This collection of essays and lectures exploring how we revitalise the search for moral goodness in public life today is founded on traditional values of honesty, moral rigour and neighbourliness, and discusses how to champion peace, community and virtue in contemporary public life. The authors include eminent figures such as the former President of Ireland Mary McAleese, historian Peter Hennessy, former First Secretary of State William Hague and former Archbishop of Canterbury Rowan Williams. There is going to be mega amounts of publicity for it; the Telegraph are running a an interview with Mary McAleese around publication date, the New Statesman are publishing William Hague’s chapter online, BBC Radio 4’s Sunday Programme are interviewing with Mary McAleese,  BBC Radio 2 Good Morning Sunday with Clare Balding will cover it, the Daily Mail will feature a comment piece from Lord Saatchi on morals and politics talking about the book, the Saturday Times have a feature on the book by its editor Claire Foster Gilbert and there is likely to be much more to come! 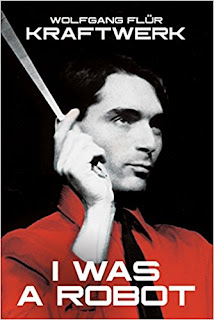 Let’s end with some music. Kraftwerk: I Was a Robot (£16.99, pb, 978 1785585807) is the full insider's story of this legendary and hugely influential act, as told by the band's original drummer Wolfgang Flür. From their early days in Dusseldorf to the band's implosion in the 80s and beyond, Flür's 432-page book is the definitive document of the Man Machine, a synth-driven quartet who transformed the face of modern music. Published this week as an extended edition paperback by Omnibus, there will be on lots of publicity for this one: the BBC World Service TV want to do an interview with Wolfgang Flür as do the Sunday Times, and Mojo magazine are interested as are the Guardian.  The book is featured in the current edition of the Record Collector newsletter. Described by readers variously as “demystifying Kraftwerk; bitter and biased but interesting” and “chatty and descriptive … evocative of the time and atmosphere” this looks like a genuinely fascinating read!


Hope you enjoy this classic 1977 clip of the robots in action!

That’s all for now folks! More next week!
This blog is taken from a newsletter which is sent weekly to over 700 booksellers as well as publishers and publicists. If you would like to order any of the titles mentioned, then please talk to your Compass Sales Manager, or call the office on 020 8326 5696.
Posted by Compass Rose at Friday, June 02, 2017